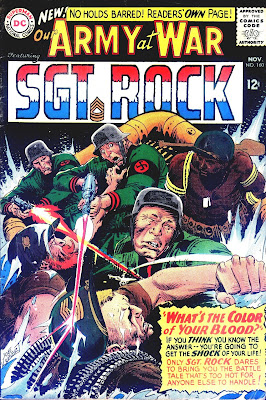 Sometimes I underestimate DC in the 1960s. Awhile ago I noted the absence of black characters in DC comics during the Silver Age, but as you can see, there's one on the cover of this mag, from November 1965. And he's even more prominently featured on the splash page: 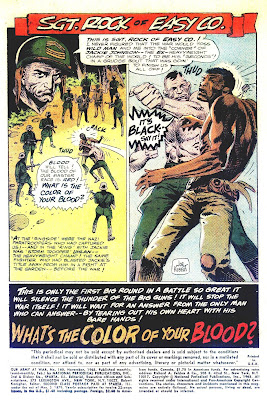 The story starts off in a clearing somewhere in Western Europe. Rock, Wild Man and a new recruit named Jackie Johnson (the black guy) have been captured by a Nazi squadron, and the biggest German is having a bare-knuckled brawl against JJ, who refuses to fight back. Why? Rock knows: 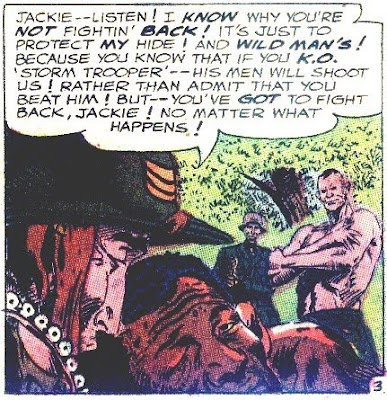 In a flashback we learn of the first time Rock had seen Jackie Johnson: 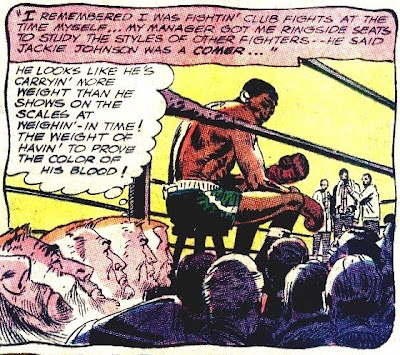 Johnson indeed proved to be a comer, eventually winning the heavyweight championship. But he lost a crucial match against this same German: 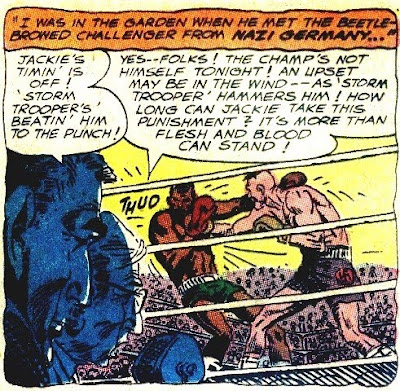 This is a thinly-veiled retelling of the Joe Louis-Max Schmeling rivalry; more on this at the end of the post.

In the story, Johnson didn't get his revenge match against the Storm Trooper, who went into the German Army, so this was their first meeting since the heavyweight fight. Later, Johnson joined Rock's unit in the Army, but was still haunted by his defeat in the ring: 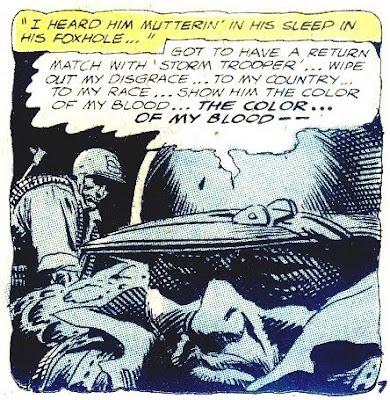 But it looked like there would be no chance for a return match; after all the German fighter could be anywhere from France to Russia. But as it turned out they did meet, under less than optimal conditions, as the Americans were captured by the Storm Trooper's unit. And: 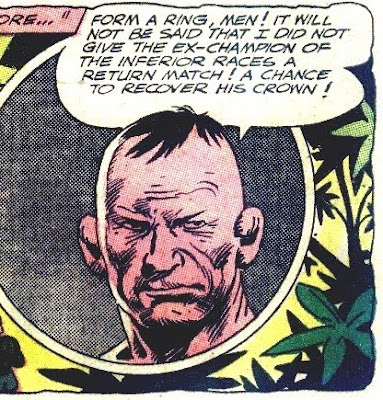 Bringing us up to where the story began. The Nazis make it clear that they will kill everyone if Jackie defeats the Storm Trooper, so the black man holds back. But: 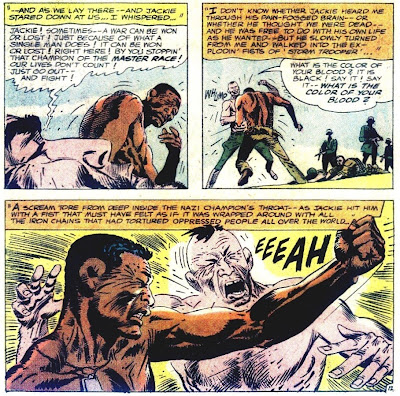 The Nazis cannot tolerate this, so they shoot at both fighters, critically wounding the German, although Jackie manages to avoid the bullets. Rock and Wild Man attack their captors and reverse the situation. But the Storm Trooper needs a transfusion if he is to survive, and perhaps inevitably: 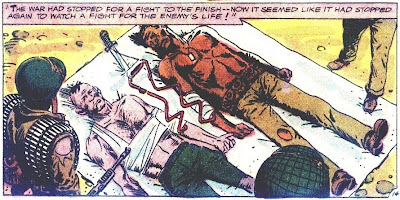 And in the end, the German realizes he was wrong: 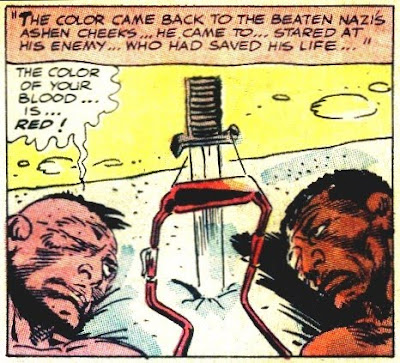 Comments: Wow! What a terrific story! Kudos to Robert Kanigher and Joe Kubert for providing what must be considered one of the Silver Age's finest tales.

Joe Louis and Max Schmeling. In 1936, Joe Louis looked unstoppable at 23-0. Max Schmeling was a former heavyweight champion, but he had won his title via a disqualification of when Jack Sharkey hit him with a low blow. So Schmeling was considered just a tune-up before Louis boxed for the championship. But Schmeling had trained hard for the fight and noticed a flaw in Louis' style which he was able to exploit in knocking out the Brown Bomber at Yankee Stadium in the 12th round.

Here's how kids were taught the story at the time, from a text story in Superman #118: 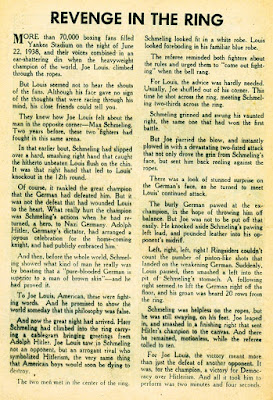 The reality is much more complex, as the Wikipedia entry on the rematch notes:

Schmeling did not relish being the focus of such propaganda. He was not a member of the Nazi Party and – although admittedly proud of his German nationality – denied the Nazi claims of racial superiority: "I am a fighter, not a politician. I am no superman in any way." Schmeling had a Jewish manager, Joe Jacobs, with whom he refused to part despite significant pressure, and, in a dangerous political gamble, refused the "Dagger of Honor" award offered by Adolf Hitler. In fact, Schmeling had been urged by his friend and legenday ex-champion Jack Dempsey to defect and declare American citizenship.

Nevertheless, the Nazi regime exploited Schmeling in its propaganda efforts, and took careful steps to at least ensure Schmeling's nominal compliance. Schmeling's wife and mother were kept from traveling with him to avoid the chances of defection. Schmeling's entourage also included an official Nazi Party publicist. The publicist not only controlled any possible contrarian remarks by Schmeling, but also issued statements that a black man could not defeat Schmeling, and that Schmeling's purse from the fight would be used to build more German tanks.

Both Louis and Schmeling did serve in their respective military forces in World War II, although of course they did not meet during those years, on the battlefield or elsewhere. After the war, they became close friends, with Schmeling serving as a pallbearer at Louis' funeral in 1981.

Update: Here's a video of the second bout:

That is a fantastic story, isn't it? I missed it first time around but got it in the "America At War" trade paperback in the late 70s.

Wish they'd do a book like that again. DC had so many great war titles. Why should the longjohn crowd get all the love?

Of course, Marvel's Gabriel Jones had been fighting in the Howling Commandos for two years at this point. :)

I wonder if there is a double historical reference in this story: the name 'Jackie Johnson' sounds like a lot like the name Jack Johnson, the first black world heavyweight champion.

I wondered about that too, Anonymous, although it would seem like a bad idea, since Johnson was so unpopular and Louis was probably the original Michael Jordan in terms of popularity.

David, reading the war books is a real treat. They are written much more at an adult level than the superhero stories. DC has published a few Showcase Presents phonebooks of the Sgt. Rock series, although they're not up to this issue yet.

Aaron, I commented on Gabriel Jones a few years ago in a similar post: