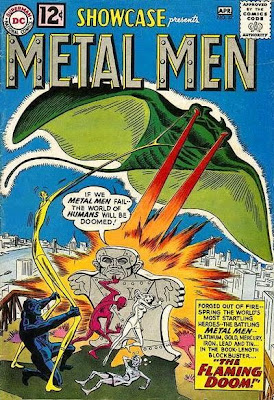 Metal Men was an interesting and entertaining feature during the 1960s, with some interesting characters and some relatively painless lessons in chemistry. The story here starts back in the dinosaur era, with a radioactive storm wiping out the giant lizards (not actually how things happened, of course). One creature managed to resist the devastation and survived until it was trapped in a glacier. But now the glacier has melted and the creature (shown on the cover) is freed. As you can see, it looks like a giant manta ray, but it flies instead of swimming.

It first attacks a lighthouse, with rays from its eyes. Then it heads to the big city: 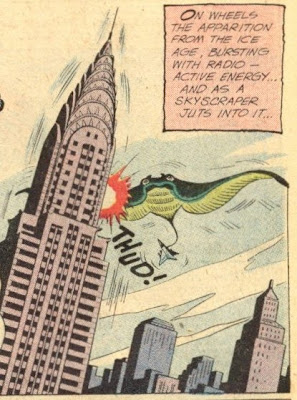 The building shown is the Chrysler Building in New York City: 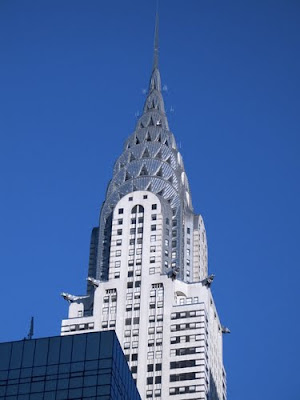 As an aside, my aunt and uncle lived in New York City around this time and I went in to visit them for a few days. I remember walking with my uncle to visit the United Nations and him pointing out to me that we were right in front of the Chrysler Building. I looked up and got dizzy, the building was so amazingly tall. At the time it was the second tallest building in the world, after the Empire State Building.

The military decides that it needs help and calls on Doc Magnus, a genius inventor, who's perfecting something new: 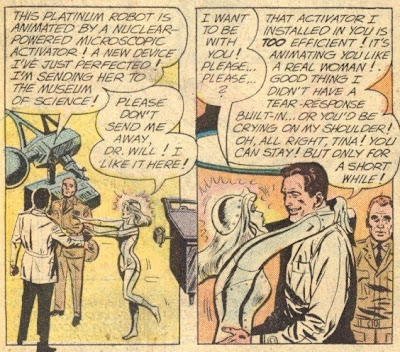 He decides to create a team of such robots, each with its own element and individual personality: 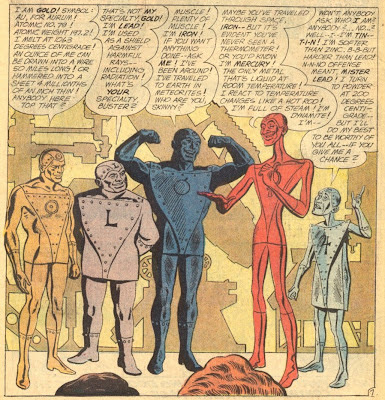 As you can see, the chemistry lessons started early.

Tin was always my favorite character in the group because of his heart, as I discussed here. He was nervous and frightened and yet he always managed to overcome his fear to display great heroism.

The newly formed band of Metal Men are to face the flying manta ray. But there's one argument to be settled. Doc doesn't want Tina (the platinum robot female) to go along. She convinces him: 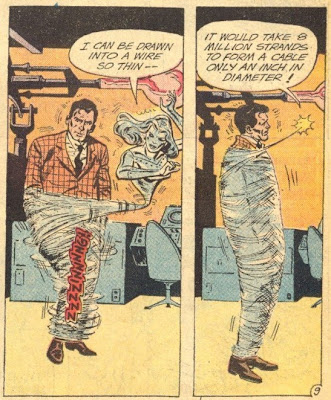 They come upon the creature and we see how the combination of elements can be used to best advantage. Iron uses his strength to form Lead into a giant ball and: 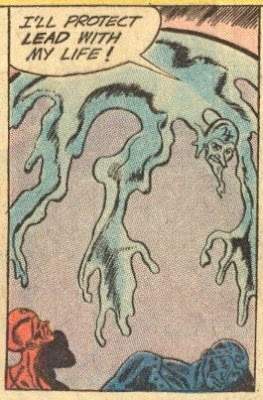 But the creature bats the giant ball back at the team. They regroup and the monster comes after them: 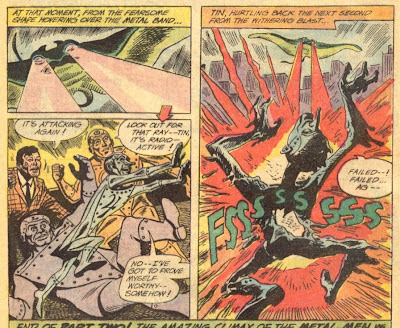 Wow, that's a powerful scene! Doc has Gold lasso the creature, while Iron holds onto him with great determination: 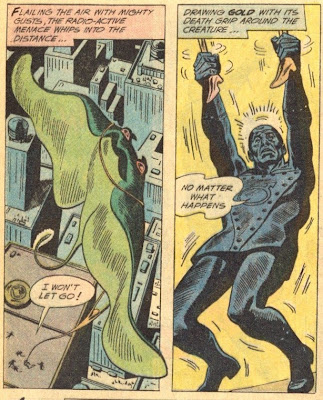 And he doesn't let go; he and Gold are pulled into the air by the manta ray. They're eventually dropped into the ocean where: 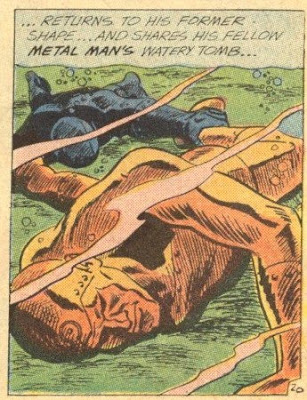 Two of the problems we all deal with in reading these comics today is that we're not kids anymore, and that we've become somewhat inured to the idea of characters being killed off and later resurrected. But in 1962, when this was published, those would be startling sequences for youngsters.

Dr Will next thinks of using Mercury to coat the monster and cut off its air supply. But it turns out that it doesn't need to breathe, surviving on radioactivity. Platinum binds it, and then Lead covers it, and the creature dies, taking with it the last of the Metal Men. Are they all dead? The story ends here:

Not to ruin the drama, but the Metal Men were robots, so of course Will could bring them back from the "dead". While this was a cool concept it did hamper the drama a bit.

Overall, this was a solid and interesting story, with two very strong characters (Tina and Tin). I am not a fan of DC's monster of the month club, but the heroes in this story overcome the less-intriguing antagonist.

I always liked the concept of the Metal Men more than the stories themselves. The title played to Kanigher's strength -- his free-wheeling imagination -- and although I wan't a fan of Andru and Esposito's work on more mainstream books like THE FLASH, it was a good match for an off-beat title like THE METAL MEN. And the Metal Men certainly had more individual personality than the Silver Age JLA or LSH. In that respect, they resembled the Fantastic Four more than any DC super-team.

But once he gave the Metal Men their quirky individual personalities, Kanigher just kept hitting the same notes over and over again. Tin's self-doubt got real old real fast, and to a lesser extent the same is true of the other Metal Men (although Mercury's boastfulness was usually good for a chuckle). And as Pat points out, the fact that as robots the MM can be rebuilt took away any element of tragedy or self-sacrifice that Kanigher tried to inject into the stories.

Plus, Doc Magnus has to be the biggest douchebag in the Silver Age DC universe. A whole post could be devoted to his dickery.

As I said at the beginning of this post, I wish I could like the Metal Men more than I do. I even bought the first Showcase volume to give them another try. But for me, the flaws of this series outweigh its strengths.

Jim, I think what you say is a valid criticism of the entire DC line in those years. Nothing ever changed; you could miss five issues and pick up right where you left off. DC's strength was that they really designed their characters well from the beginning; Marvel's was Stan's willingness to tinker. I recently read the 52 maxi-series, and I couldn't help but laugh when (in one of the final issues) Doc Magnus recreates his Metal Men, and the first thing Mercury says is, "Say, Doc, did I ever tell you I'm the only metal that's liquid at room temperature?" Yeah, like every issue!

Great review!
And of course can you think of any other comic of the time where a platinum blonde had to be fought OFF!!! LOL
Norman