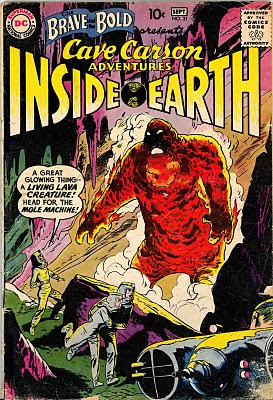 DC was able to launch several series in the early 1960s featuring characters without super-powers. Sea Devils, Challengers of the Unknown, and Rip Hunter all had decent runs before giving up the ghost by the end of the decade. But there were several pilots whose chute failed to open, including this one.

Cave Carson was certainly given a chance to succeed; his tryouts spanned eight issues or about 200 pages. That's longer than some characters that did get their own mags, like the Hawk and the Dove or Anthro.

Cave's crew consisted initially of Bulldozer Smith, a former sandhog (underground tunnel expert) and Christie Madison, a geologist (yet another early 1960s DC female character in a non-traditional woman's occupation). Looking at that lineup, you can see the one item missing in the standard foursome as exemplified by the Fantastic Four, Rip Hunter and the Sea Devils. Smart guy (Cave), strong guy (Bulldozer), woman (Christie), but no kid. The team would expand in later stories to include Lena, a pet lemur, and Johnny Blake, Cave's swaggering rival for Christie's affections.

The story begins with Cave trapped below the surface of the Earth. Via a flashback, we learn that Cave had gone down there to investigate some mysterious occurrences. A giant metal tower and some train cars had been sucked down into the ground. He left his two assistants behind to finish work on the Mighty Mole:

Fantastic modes of transportation were pretty standard in the Silver Age, from the Batmobile to the Arrowcar to the Pogo Plane to the Metal Men's flying platform. Kids are fascinated by unusual vehicles and the Mighty Moles' likely prototype was the Hillman car, a 1960s amphibious craft: 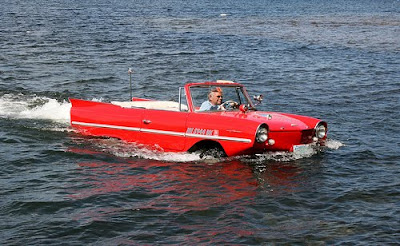 Christie and Bulldozer have completed the Mole and bore into the ground looking for Cave, whom they find trapped under some freight cars. After rescuing him, they learn of the cause of the mysterious occurrences: 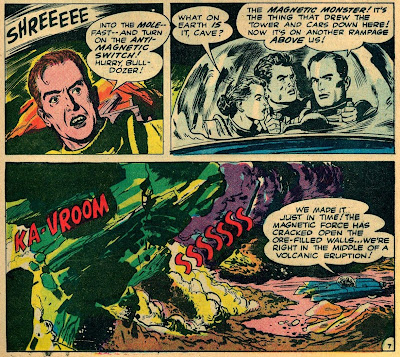 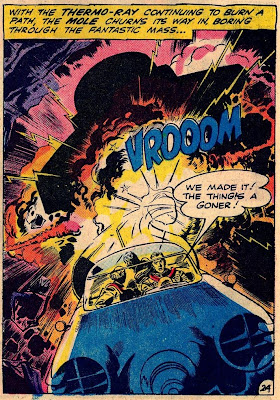 The story is standard early 1960s DC, with monsters and more monsters; Bruno Premiani's art is the main redeeming feature. Jack Schiff was the editor for the first five (Brave & Bold) tryout issues, and the stories feature his steady recipe of monsters and aliens.

Things do improve a bit when the series was given further shots in Showcase #48, 49 and 52. There is some character development and hints of depth in this sequence from #48: 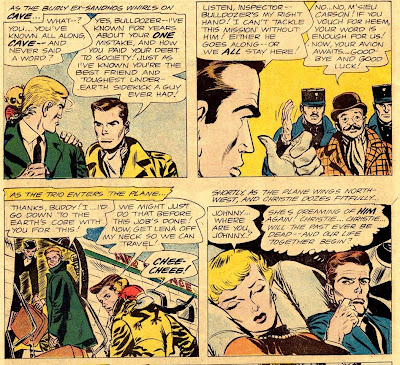 By this point Murray Boltinoff was the editor, with Lee Elias on the artwork and Bob Haney handling the plot and dialog. Although I am not a fan of Haney's work on the Brave and the Bold and Teen Titans, he does a decent job here of making the characters more three-dimensional. He adds what would appear to be a long-term villain here: 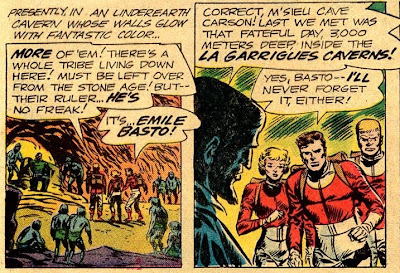 But although the series improved quite a bit under the new creative team, it was not a hit with the youngsters of the 1960s and save for a few cameo appearances, Cave Carson has largely vanished. I recommend the Showcase issues as worth reading.

Update: An anonymous commenter points to the Pellucidar series by Edgar Rice Burroughs, in which Abner Perry invents the Iron Mole, a craft that takes him to a world at the Earth's core. This is obviously the inspiration for the Mighty Mole, although the latter does have an amphibious quality that I cannot find in ERB's creation.
Posted by Pat at 3:15 PM

Thanks, Pat. As a youngster, I pretty much stuck to the Superman titles and (later on) the Schwartz-edited super-hero comics, so I enjoy your visits to the lesser-known corners of the Silver Age DC universe.

I, too, have a soft spot for DC's adventure teams, Pat. I wonder if there was some cultural influence that prompted DC to try out a book about underground explorers.

I wonder if Sea Hunt's TV popularity have led to the idea for the Sea Devils (Aquaman got his tryout soon after.)

I get Rip Hunter b/c there's a;ways fascination with time travel, but cave explorers?

cave Carson looks better here than I'd have thought. I did love the Sea Devils

Ed: The movie "Journey to the Center of the Earth," based on the Jules Verne novel and starring James Mason and Pat Boone, was released a year before Cave Carson's debut. Of course, Herron might have been directly inspired by Verne's novel, or by the Pellucidar novels of Edgar Rice Burroughs. Like time travel, the idea of strange underground worlds was a fairly common theme of science fiction and fantasy. --Jim

P.S. Although the Hillman car might well have inspired the Mighty Mole, another possible inspiration would be the Iron Mole--the invention that enabled Burroughs' surface-dwelling protagonists to reach the underground world of Pellucidar.

Anonymous: Great thought there! of course that must have been part of the impetus for CC. Good call!

I haven't read Carson's Silver Age stories, but I think the series might've been substantially inspired by the film Unknown World (1951). This features a mole-vehicle called the Cyclotram, which looks more like Carson's vehicle than the Thunderbirds type of mole, although it doesn't have the car look that Carson's does.

My recollection is there's a scene in the film where the characters use suits like the ones on the Brave and the Bold cover. In another sequence the Cyclotram survives being fully immersed and floats to the Earth's surface.

Thanks, this was an interesting read. I know Carson from the Forgotten Heroes, but haven't managed to track down any original Silver age issues. I have managed to get my hands on several issues of Sea Devils, however and some of their covers were more beautiful than anything produced with todays Hi-tech stuff.
They were done using the wash technique of which I unfortunately have no clue.
Paul Levitz described it in the 70 years of DC mammoth tome, but not being a native english speaker I didn't really get it.