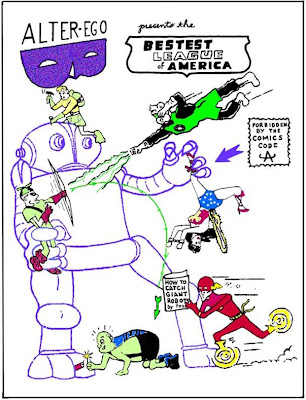 It started, as did many things in that simpler era, with a letter. A young man wrote to Julius Schwartz, editor at DC Comics, inquiring as to the availability of back issues of All-Star Comics, a long-defunct DC title from the 1940s. Schwartz did not have any to sell the young man, but he did remember that the writer of those old issues, Gardner Fox, had kept his own copies.

The young man was named Jerry Bails, and following up on Schwartz's suggestion, he negotiated a deal to buy Fox's collection. Bails had read All-Star as a kid and amassed a decent collection before the title was canceled. Now he was looking to recover the issues he'd lost over the years and find the ones that he'd never read before.

If all this sounds a little strange, remember that back in those days there were no comics stores (forget about Ebay). Comics were sold in lots of little mom and pop newsstands and drugstores. Nobody advertised back issues in comics magazines, and so amassing a collection of older issues was pretty much a hit or miss proposition, involving checking garage sales and used bookstores.

And then a very odd and significant thing happened. Another young man wrote to Schwartz, also asking about back issues of All-Star. Schwartz referred him to Fox, who referred him to Bails.

Bails was so thrilled to discover that there was another adult out there who liked old issues of All-Star that he sent the second young man, Roy Thomas, duplicate copies of several of his issues. Over the next several months, Thomas and Bails wrote back and forth dozens of times.

Not long after this, Julius Schwartz resurrected the concept of a team of superheroes, this time named the Justice League of America. He incorporated the two superheroes he had relaunched thus far, the Barry Allen Flash and the Hal Jordan Green Lantern and rounded out the membership with three existing DC heroes, Wonder Woman, Aquaman and the Martian Manhunter.

Bails and Thomas were enthusiastic, but they had seen that comic books come and go. Bails wanted the Justice League to last, and so, during a trip to New York, he suggested to Schwartz that he start up a little newsletter for fans of the JLA, to help market the comics.

It was one of those situations where the stars were perfectly aligned. As it happened, Schwartz knew all about fan newsletters, because back in the 1930s he had started one for the then-new science fiction fandom. His two teen co-editors of Time Traveler had been Mort Weisinger and Forrest Ackerman (later the publisher of Famous Monsters of Filmland). He told Bails that his project should be called a fanzine (combining fan and magazine), and started publishing the full addresses of letter writers so that Bails and Thomas could compile a database of older comic book fans for their market. Schwartz would provide Bails with information about upcoming stories so they would have a constant supply of copy.

Alter-Ego #1 (cover shown above) was the result. As you can see, it's something of a parody of the cover of Brave and Bold #29: Bails opened with a mission statement that is largely what you'd expect, but he did throw a rather large bone to Schwartz and DC: he sprinkled cryptograms throughout the issue that could only be decoded with a key that Bails promised to send anyone who sent him a copy of their subscription label to Justice League of America.

The next few pages were devoted to previews of coming issues of the Schwartz-edited magazines, including a few classics: 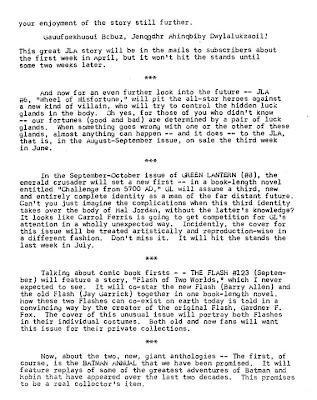 If that format looks familiar to you, it should. DC used much the same layout for their Direct Currents house ads in the mid-late 1960s: 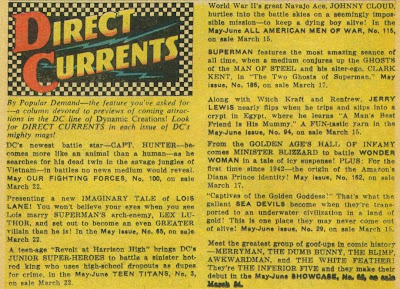 There followed feature articles on the Golden Age villain the Wizard (by Bails) and the Spectre (by Thomas), and Wonder Woman (Bails). The issue closed with the JLA parody shown on the cover; here's the splash page by Thomas: 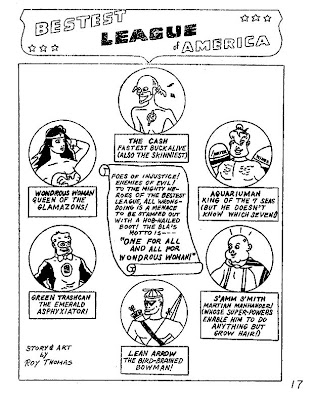 Alter Ego was published sporadically throughout the 1960s; Julius Schwartz recommended it in the letters column of JLA #8, sending circulation soaring:

Thomas revived Alter-Ego as a glossy, slick magazine in the 1990s that is still published today. It's a terrific read; fans will love the special issues devoted to their favorite artists. My copies of the issues dedicated to Dick Sprang (#19) and Will Eisner (#48) are especially treasured.

Bails had already conceived of the next phase of fandom: the Alley Awards, kind of like the Academy Awards but for comic books. Compiling the votes for the awards led to the "Alley Tally", an early gathering of comic book fans, that led to the earliest comic book conventions.

The influence of organized fandom on comic books has been enormous. The comics industry drew much of its next generation of talent (especially writers) from the ranks of the fans. Roy Thomas went on to become a major force at Marvel (succeeding Stan Lee as Editor) and DC. E. Nelson Bridwell, Tony Isabella, Mike Friedrich, Martin Pasko, Jim Shooter and many others started their careers as fans. As the demand for back issues grew, comics companies began (starting around 1965) to emphasize the collectible nature of their products.

Note: I realize I have barely skimmed the surface of this topic. For more details on the birth of Alter Ego, see this article by Bill Schelly. I drew on other sources as well; Julius Schwartz's Man of Two Worlds was especially helpful.
Posted by Pat at 9:48 AM

"The comics industry drew much of its next generation of talent (especially writers) from the ranks of the fans."

Indeed. And that's where it all started to go wrong...