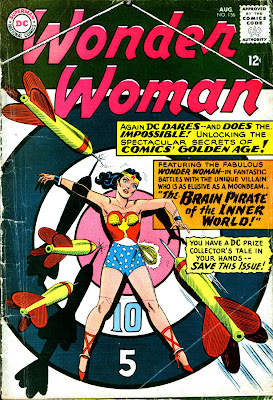 One of the things that I've been meaning to do is look back through the comics to see when the concept of comics being "collectibles" first started; this must be a fairly early example, with an August 1965 cover date. Marvel Collectors' Item Classics started the same month, so obviously by then the news was getting out about the value of the older issues.

This issue also demonstrates the growing influence of fandom. In 1961 and 1964, Wonder Woman was selected by the Alley Awards as the "Worst Comic Book Currently Published."
While that is a bit unfair, I suspect what the fans were getting at was more like "The worst comic that used to be good."

In response, Robert Kanigher decided to give the fans what they wanted; a Golden Age-type story with Golden Age-type artwork. Does it work? Mostly it does. Oh, it's zany, but the GA Wonder Woman was quite wacky. The story starts out with Steve Trevor telling Diana Prince that he always knew his Wonder Woman was worth a million, and now he has the proof: 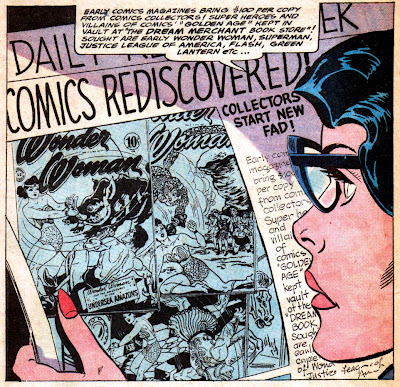 How'd you like to be able to buy early Golden Age issues for $100 per copy?

Intrigued, Wonder Woman visits the Dream Merchant (a fictional comic book shop). She starts reading an old comic and suddenly finds herself pulled into the story:

Incidentally, although the Brain Pirates were featured in a Golden Age Wonder Woman story in Sensation Comics #82, there is only a superficial similarity between that tale and this one.

The Brain Pirate tries to steal Wonder Woman's brain, but she throws off his control. However, he succeeds with Steve Trevor: 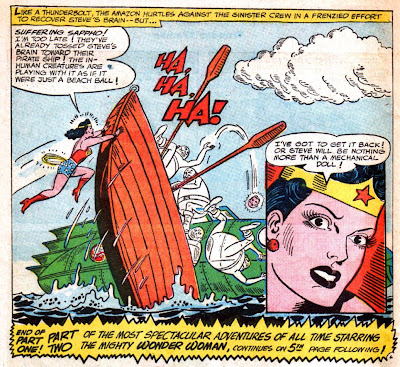 There follows a zany battle with the pirates over Steve's "brain"; at one point they load it into a cannon and threaten to fire it far out to sea. She prevents them from doing that, but she's stymied when they control Steve and order him to shoot her if she does not submit: 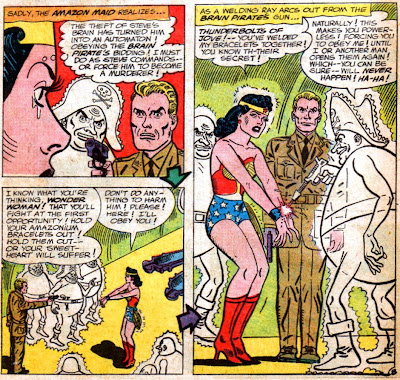 Just then the Holliday girls and Etta Candy happen to be rowing by, and the pirates threaten to ram them. Wonder Woman prevents this:

Err, but isn't she supposed to be only as strong as a normal woman when her bracelets are welded together? She returns to the pirate ship and is there when the Holliday girls attempt to rescue her by swimming to the ship. But the Brain Pirates capture the girls' brains, and the ship takes off for outer space.

After landing on the Brain Pirates' world, they torment Wonder Woman by making all the passengers walk the plank, into a shark-infested sea. Wondy fights off the sharks, and saves Steve and the Holliday girls: 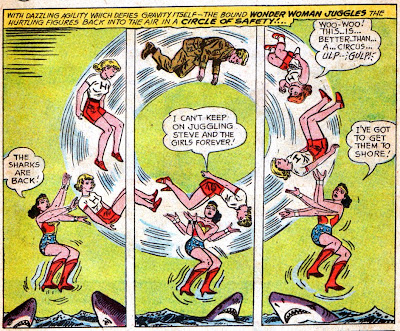 She gets them safely to land, but the Brain Pirates still control them and force Steve and the girls to capture Wonder Woman. The BPs parade their slaves into their city. They attempt to kill Wonder Woman but she manages to avoid their spears and swords. Then comes the dartboard scene shown on the cover. She manages to get a dart to pierce the chains holding her bracelets together, and now she's free. The leader of the Brain Pirates makes a deal: 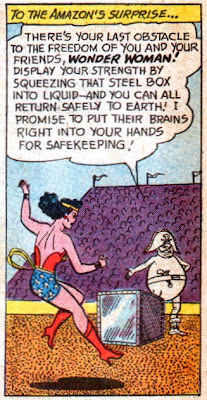 Except, as you can probably guess, the brains of Etta, Steve and the Holliday Girls are inside that box. Fortunately Wonder Woman realizes this, grabs the box and her friends, calls for her plane, and gets everybody safely back to Earth. And in the end Wonder Woman pops back out of the comic and into the store where she ponders: 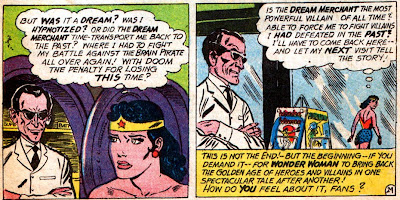 The next two issues were done in Silver Age style and featured the memorable Egg Fu. Wonder Woman #159 featured a retelling of the origin of the Amazon princess, and Golden Age-style art, and Kanigher continued the experiment until #165, when the Silver Age artwork returned. Kanigher noted in the letters column of #166: 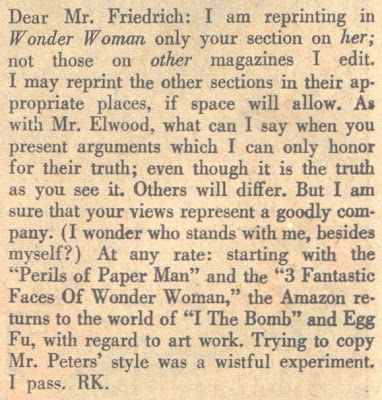 Wow, that's one unattractive super-heroine - who was the comic supposed to appeal to?

The one legacy from the 'Return of the Golden Age'-era Wonder Woman was the return of the red boots. I still prefer the sandals.

Ah, can't beat Kanigher for good old inane DC plotting--although he had his share of good stuff, too (I liked his Metal Men and Sgt Rock stuff--his WW books were just awful). Check out the cover of Superman !83, and 80-page giant, for an interesting early concept of the value of golden age collecting.