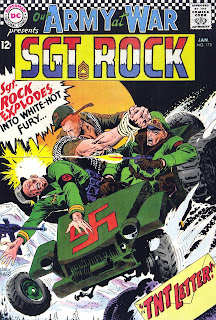 Here's a cover that gives only a hint as to the innards.  As I have discussed in the past, Sgt. Rock scorned thoughts of romance as interfering with the business of killing Germans. This is not atypical in heroes for adolescent boys; Sherlock Holmes and Doc Savage, for instance, were notably uncomfortable in the presence of the fairer sex.

Well, in this story we learn that Rock had indeed been a red-blooded American boy before his induction into the armed forces: 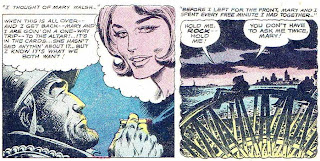 They made plans to marry after his service was over.  But, no particular surprise, after insiring him through several battles, Mary sent him a "Dear Rock" letter: 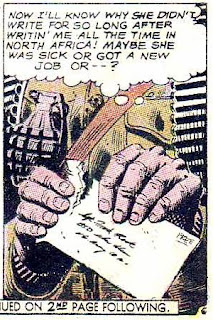 So he goes off to ponder the cruelties of fate when: 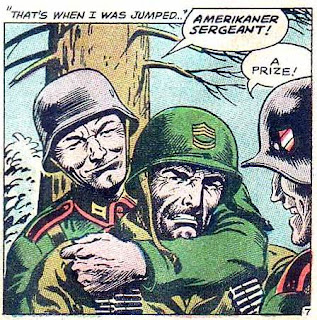 They take him off in a German jeep, where Rock rebels, giving us the cover image.  He kayos two of the Germans but the third one shoots him in the back as he flees.  Fortunately he makes it to a cabin, and passes out.  When he comes to: 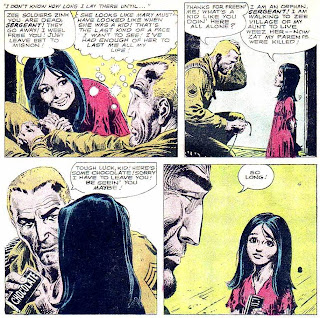 You've gotta love that last panel.  Around this time, the comics used to advertise these posters of sad-eyed kittens: 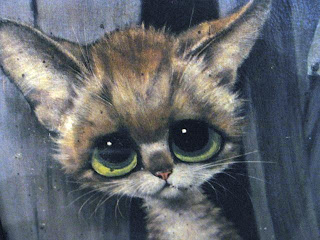 The resemblance is unmistakable.  Well, as you can probably guess, Rock finds it impossible to shake little Mignon.  And she turns out to be quite brave: 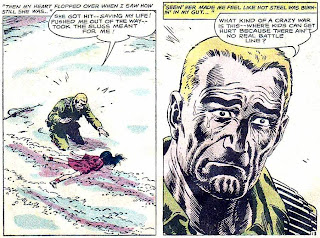 So Rock goes charging towards the nearest Germans, not to seek revenge, but to get help for the youngster. Of course, they don't see it his way, so he's got to fight his way through to the medical supplies: 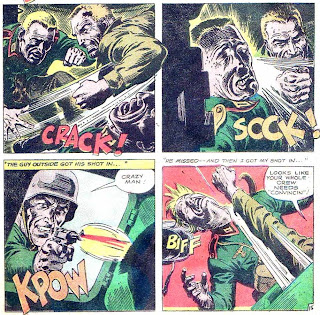 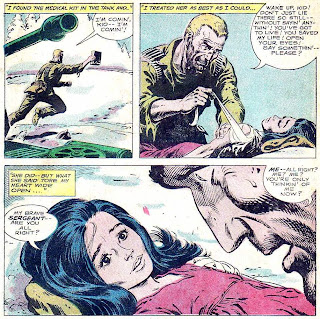 After getting back to the allied lines, he turns her over to a medic.  But she has one last request: 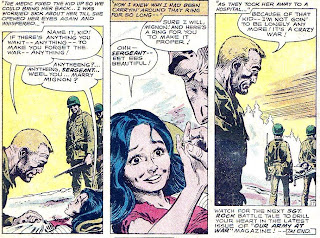 Yes, you can say that it seems a little creepy, but Rock's no molester.  It's just a sweet little story about how Rock found something to fight for once Mary left him.  When I was a much younger man, there were a couple of younger sisters of girlfriends who quite obviously had crushes on me.  And I always tried to treat them as special, not out of some nefarious intent but because I could remember what it was like to be a kid and have a crush on an adult.

The backup story is an interesting tale about a young American who had tried on several occasions to swim the English Channel, but each time he was forced to abandon his quest due to the elements. A year later he is a volunteer fighter in the RAF, when he is shot down on a return flight from France.  So the story is about him fighting his way back across the channel:

When he makes it back to England, he gains the confidence that the invasion of Normandy will succeed.

Overall, I loved this comic.

Ya know, it's sad that in our "progressive", "enlightened" times a sweet ending to a beautiful story like this would have to be marred by some hoser snickering to himself. You'd have to take the whole thing out of context to stroke that snide sense of perversity, and out of context...what's the point? These are the same people who snigger about Batman and Robin being gay. Why does an imagined sexual element have to overtake the emotional one? Thank God we'll always have these great old comics to go back to and enjoy on THEIR terms as they were intended.

Thank you, Pat, for running an article on this story.

I was not a solid Sergeant Rock fan. (In the eternal "Rock or Fury?" debate, my preference was for Fury.) But I did pick up a few of DC's war comics over the years. Enough to keep track of what was going on.

However, "T.N.T. Letter" showed that Kanigher could break his pattern, and when he did, the result could be quite impressive. I can easily envision "T.N.T. Letter" working as a script for the television show Combat!.

Kanigher dealt with the human side of war, but too often, he was so heavy-handed that he smothered much of the emotional result he was going for. But in this one, he hit the mark squarely. It's poignant without being sappy, and the end is a genuine lump-in-the-throat moment.

Like Joplin John (who was spot-on in his criticism of the sniggering that seems to be part of modern sensibilities) and you, I found nothing sordid in the ending. It's sweet and touching, with no hint of sexual inneuendo.

There is one touch I would have added during the scene in which Rock was fighting it out with the Germans to obtain medical supplies for the girl. It would have been a nice touch for the Panzer tank commander to realise what Rock was fighting for, order his men to stop, and then give Rock the medical kit.

The Nazis were pure evil, no question. But the average German soldier was just a guy fighting at his country's call, and not a soulless monster. There were real moments during WWII when the humanity on both sides rose to the fore.

But, it would have been gilding the lily. Kanigher crafted a marvelous little gem of a tale, and thanks, Pat, for introducing me to it.