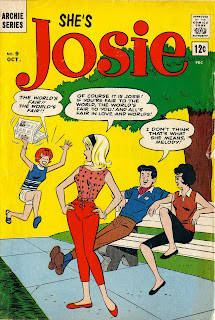 Archie Comics had initially started out in the 1940s as MLJ, and their early features were superhero characters like the Shield (the first patriotic superhero) and the Hangman.  Archie himself didn't come along until Pep Comics #22, and wasn't featured on a cover until #36.  But he rapidly eclipsed the other characters in MLJ's line, which proved fortunate as the superheros began dying out shortly after the war for almost all the publishers.  Archie even got the rare tribute of having a radio series, which popularized the character even more.

In the late 1940s and 1950s, the Archie brand exploded.  Archie's buddy Jughead got his own magazine, as did his girlfriends Betty and Veronica.  The character proved so popular that they even started publishing Little Archie, the adventures of our hero as a tyke.

But at the same time, the publisher wanted to diversify.  In 1959, Jack Kirby was between his short-term gig at DC Comics (where he created Challengers of the Unknown) and his famed period at Marvel.  Archie Comics commissioned Joe Simon and him to create a new superhero, initially known as The Fly (later redubbed Flyman).  For the next several years Archie Comics labored to create a superhero universe with The Jaguar, a resurrected Shield, Steel Sterling and other superheroes, collectively known as the Mighty Crusaders.

Ironically, nothing worked except a female version of Archie named Josie. Josie had pretty much the standard backup cast for a teen comic. There's Josie's ditzy blonde friend Melody, her (initially beatnik) boyfriend Albert, wealthy Alexander, and brainy (but plain-looking) Pepper. The comic does not appear to have been a big success at first; I don't remember ever seeing these in the spinner rack in my hometown. But it got lucky. In 1968-1969, a Saturday Morning show featuring Archie in the inevitable rock band was picked up by CBS. It was a huge success, and the group who recorded under the name The Archies came up with a smash hit in the song Sugar, Sugar. Josie quickly became a rock star too, her comic was renamed Josie and the Pussycats, and their Saturday morning cartoon debuted in 1970.

All that was far in the future at the time this issue came out. As you can probably guess, this issue featured Josie and her pals going to the New York World's Fair of 1964-65. Comics often did tie-ins to major events like this, although I confess this is one of the only ones that I can remember for that World's Fair. Which is remarkable, because Marvel's characters were all set in the New York metropolitan area at that time. The story starts out with Josie announcing that she and her pals are going to enter a contest: 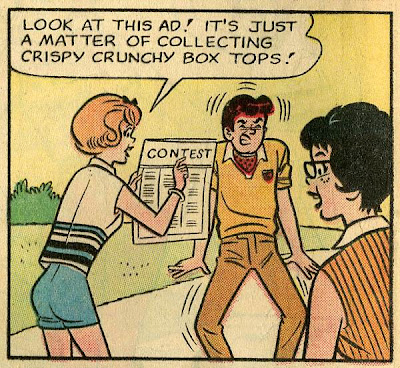 And so the goal becomes to amass a horde of Crispy Crunchy boxtops. Josie gets two from her house. Albert contributes three, but only after getting sick from eating all those boxes of the cereal. Melody uses her charm: 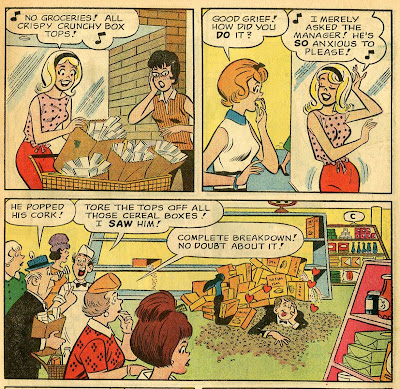 And Alexander just buys up a warehouse of Crispy Crunchies. They're certain to win, right? 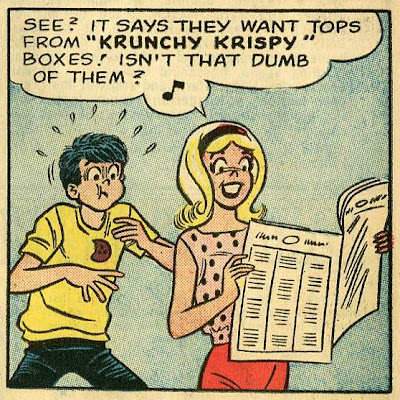 Fortunately for the story, Alexander decides to simply foot the bill for the trip to New York: 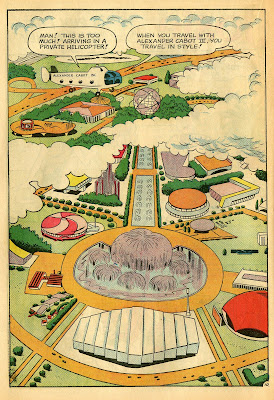 I believe the only structure still remaining at the site is that globe known as the Unisphere: 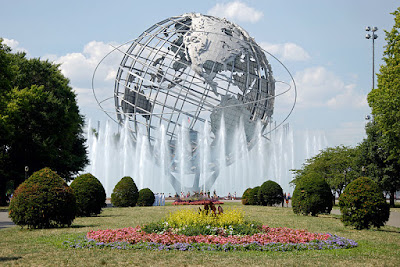 But Alex loses his wallet while riding the monorail. A kid in a cowboy hat picks it up, and the next several pages are consumed with the teens chasing him around the fair.

That's pretty interesting, because as you may recall, Alan Shepard did hit a few golf balls on the moon:
Melody eventually turns up with the kid in tow; he's apparently been following her. Unfortunately, he gave the wallet to his mom, and now he's lost. They suggest putting him on the TV at the fair, but:

Nice mom! So now they go chasing after the mother, but it turns out that she gave it to a policeman. Fortunately she immediately spots the officer in question, and he actually has the wallet. Unfortunately, they are all so worn out from chasing around the fair that they decide to go home. But it turns out that their escapades with the Crispy Crunchies caused a flurry of publicity for the company, and so:

Comments: Entertaining fluff.  Incidentally, there was a guest cameo: 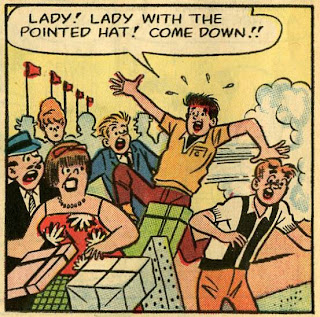 I am surprised. You don't remember "The Flintstones at The New York World's Fair"?

Damn, my commenters are good!

Jimmy Olsen and Lois Lane both went there in their comics, I think....

wow. I had no idea Josie had a history prior to the Pussycats. Very interesting.
It's remarkable how big box-top coupons were back then. Rocky and Bullwinkle had a story in which Boris plunges the economy into chaos by mass-producing boxtops and then obtaining all the premiums.

Also may be worth noting that Challengers of the Unknown was co-created by Simon and Kirby together as one of the last things they came up with as business partners. When they split, Simon gifted the concept to Kirby and he took it to DC. At the same time Simon and CC Beck were trying out a new strip to be called Spiderman. It went unpublished, but ultimately formed the basis for the Fly...