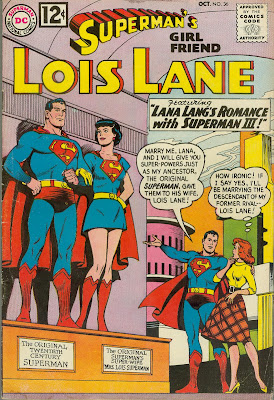 The opening story is The Day Lois Lane Vanished. It's a very standard DC plot, where the protagonist suddenly finds that nobody remembers him or her: 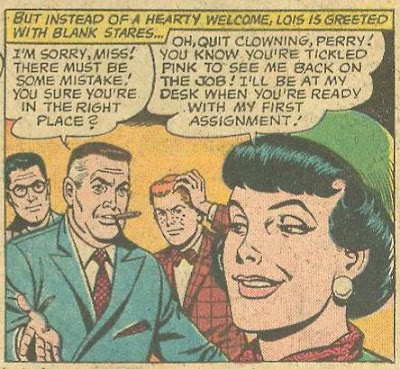 Offhand I can think of at least two stories where Batman faced the same puzzle; Am I Really Batman from Batman #112 and The Batman Nobody Remembered, from World's Finest #136. There are basically two answers to the puzzle; either it's a hoax for some reason, or the protagonist has somehow ended up in another dimension. In the first Batman story it was a plot to keep Batman awake for 24 hours because a villain had poisoned him with a drug that would kill him if he fell asleep anytime in the next day, and in the second Batman story it was another dimension. In the Lois Lane story: 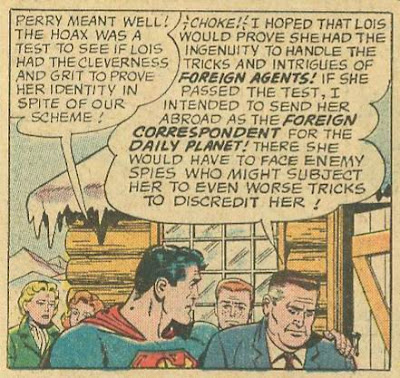 The story is also remarkable for the efforts Lois goes through to prove to herself that she really existed; after her co-workers and sister deny her reality, she even visits Lex Luthor in prison, but he also claims to have no memory of her. As you can probably guess from that above panel, the story reaches a climax in tragedy, as Lois apparently throws herself off a cliff, convinced she is insane. Well, no. See, she realized that Lex Luthor was in solitary confinement, and therefore the warden would never have allowed her to see him. So she pulls a gag on everybody by making them think she's died. That Lois, such a kidder! And in the end: 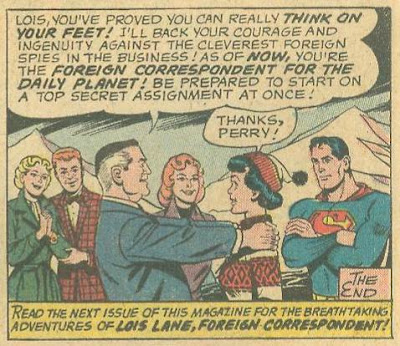 But that is a tale for another time. For the second story, we get: 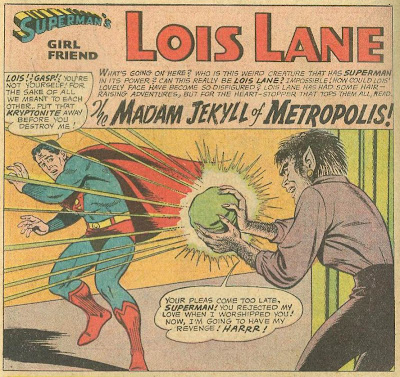 No particular surprise; everybody gets that wrong. Dr Jekyll was the good guy; it was Mr Hyde who was the villain in the classic Robert Louis Stevenson tale. Lois is addressing the first meeting of the Lois Lane fan club, lecturing them on the various effects that Red Kryptonite has had on Superman, when suddenly: 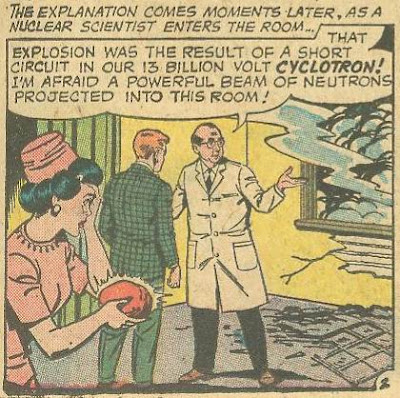 The LL fan club holds their meetings in a room next to a cyclotron? Anyway the particular specimen of Red K that Lois was showing off to her admirers was one that had turned Superman into a Jekyll-Hyde creature, and Jimmy wonders if it will have that effect on Lois due to the neutron beam. Good guess: 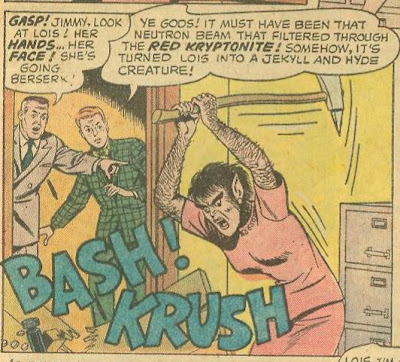 Later, she cuts off Lucy's hair: 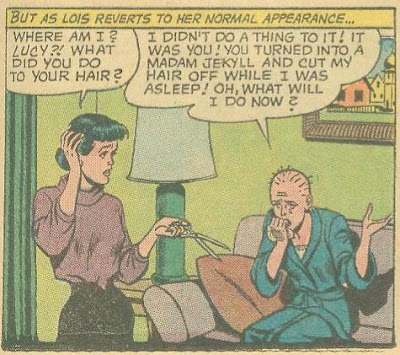 And when she turns on the TV to see Lana Lang talking about her Superboy memorabilia, she becomes fanatically jealous: 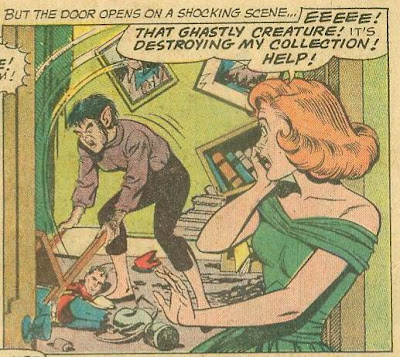 But Lana refuses to press charges and Perry offers to take responsibility for Lois. When she changes again, to save himself from her he offers her a chunk of Green K. She goes to an auditorium to kill Superman (as shown on the splash), but once there: 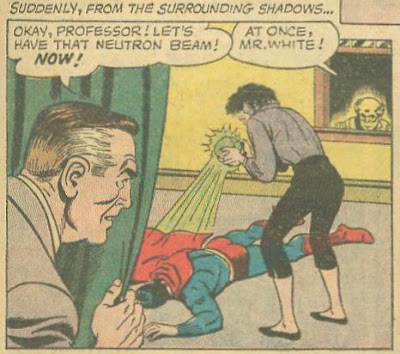 See, it wasn't really Green K, but a chunk of "Good Samaritan" Red K, which turned Lois back into her normal self. And that wasn't really Superman, but a puppet manipulated by a couple of Lois' talented fan club members. The finale is the cover story, and it's an imaginary tale. Superman comes up with a way to give Lois permanent superpowers and finally marries her. They have twins (many of the imaginary tales feature this outcome, for some reason). Lana is of course devastated, but she wears the mask: 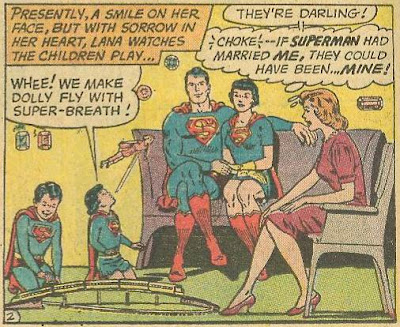 She volunteers to test an experimental time machine, which sends her into the future. She meets up with Superman in the future, who falls immediately in love with her, although she resists him at first, thinking he's still the man she knew. He explains: 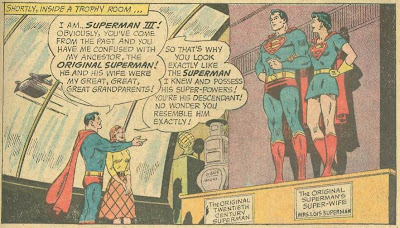 Hmmm, given that we saw Lois and Superman had a son, wouldn't their grandson be Superman III? Assuming of course that there weren't three generations of only girls in the family.
They fall in love and get married... and that's the end of the story. Rather dull and unsurprising given the cover.

Overall the issue was entertaining, particularly the opening story.  I will have to check up on the following issue to find out about Lois' adventures as a foreign correspondent.
Posted by Pat at 8:57 PM

> "... wouldn't their grandson be Superman III"

They may handle it like Pope's names, where the successor to e.g. Clark II could be Kent VI, not Clark III (who may come later, if ever). If Superman III resembled the original more strongly than the past few generations, he might have decided to take the hero name Superman III rather than Hyperion II or Supreme I.

They pulled the exact same hoax on Jimmy for the same reason.

Why is Super-Lois wearing yellow rubber marigolds? Is this a subliminal message to suggest that even a Super-Lois still has a traditional role in 1962 and there are social boundaries she must not cross?