As you recall, in my last post, Lois was subjected to an inhumane experiment by Editor Perry White. He got Lois' friends, her sister, and even the warden at the state prison, to go along with a hoax where everybody pretended they'd never heard of a Lois Lane. But it was all for a good reason, we were assured. Perry was testing her to ensure that she had the ingenuity to handle the tricks and intrigues of foreign agents. The ending of the story promised that in the next issue we would see Lois abroad, handling difficult assignments with aplomb.

But in Lois Lane #37-39, no such story appeared. In the letters column of #39 someone remarked on the missing adventure: 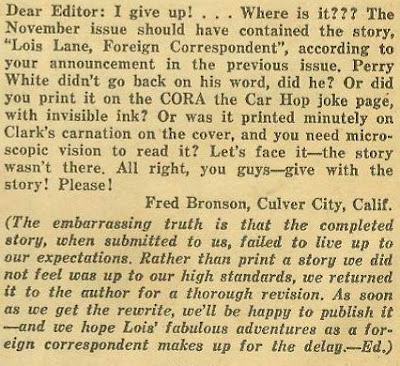 And the tale finally arrived in LL #40:

Okay, so what's Lois' dangerous and thrilling assignment, for which she required such careful vetting? 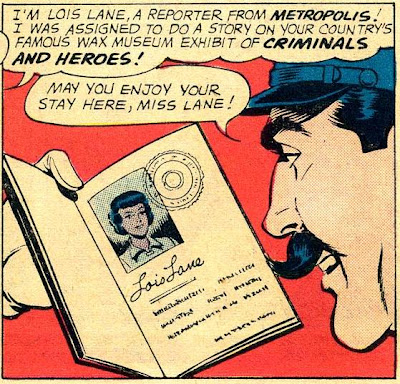 !!!! No kidding, she was assigned to do a feature article on a wax museum? And actually, that's not some cover story; that's really her whole reason for visiting the tiny European country of Brozna.

Granted, the story develops rather oddly from there, with Lois apparently marrying a very eligible local Duke, although she cannot remember the ceremony as she was involved in a monorail crash while setting out on their honeymoon which gave her a mild case of amnesia. She decides that she doesn't really want to be married to the Duke, but when he threatens to kill himself: 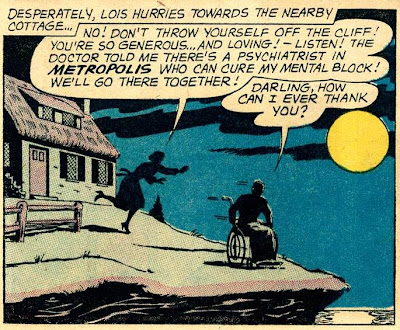 While back in Metropolis, Lois receives wedding gifts from all her old friends, but: 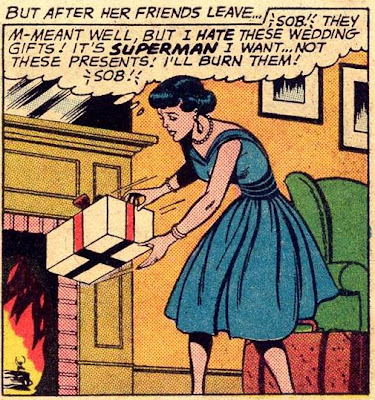 That's even worse than re-gifting! But the roaring fire causes something inside her husband's luggage to melt; it's a bunch of masks that he wears to deceive people. It turns out he was Brozna's Nazi collaborator during World War II, that he used his supposed status as Lois' husband to escape to America, and that they never actually were married. Instead he had drugged her and faked the monorail accident, convincing her that she simply forgot their wedding due to her injuries.

So even though Lois was supposedly tested so that she would be able to withstand the best tricks enemy agents could throw at her, she still was duped by the Duke! Fortunately Superman is around to save her, and she gets a big scoop.

Comments: How bad must this story have been the first time around?
Posted by Pat at 10:20 PM

Blimey, I think I read that as a kid, maybe in a UK Super DC reprint. Silly stuff