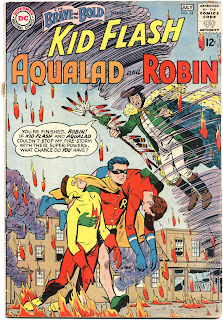 It's interesting that Robin, who had been around for 24 years at that point, gets third billing on this cover, although you can tell pretty easily that he's going to play a crucial role in the tale, given that "What chance do you have?"

As the story begins, the teenagers in the town of Hatton Corners are rebelling against their parents.  They want a new clubhouse, and petition the trio of super-lads shown above to help them. But when the Teen Titans (a term not used in this book, although this is obviously the beginning of that group) arrive, they find that the kids have split the scene, leaving a note explaining that it was because the adults weren't hip to the music. Robin immediately realizes that it is a forgery: 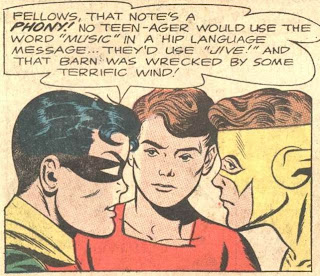 No teenager would use the word "fellows" either.  Kid Flash and Aqualad go search for the missing teens, while Robin stays in town.  A twister suddenly appears and the Boy Wonder hustles the people into the bank vault for safety, but there is no room for him.  He clings to the door, but the twister tears him loose.  Fortunately Kid Flash comes to the rescue:

We get our introduction to the villain of the story: 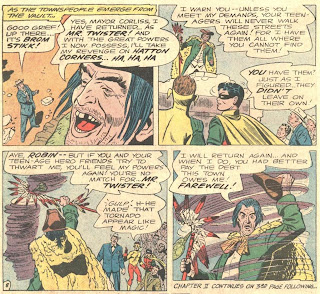 The adults have begun to miss the kids, and they explain the background. Stikk's ancestor leased the land for the town centuries ago with a very curious rental price: One passenger pigeon feather per year, or else the labor of one of the town's youth.  At the time it seemed like a ridiculous bargain, as there were plenty of passenger pigeons but Stikk had suddenly appeared demanding back rent for the prior 50 years.  Since the passenger pigeon was extinct, there was no way the town could comply, and so he has put them to work erecting a monument to himself: 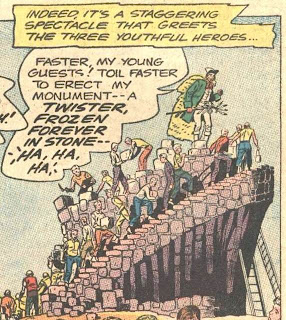 The kids are starting to appreciate their parents as well: 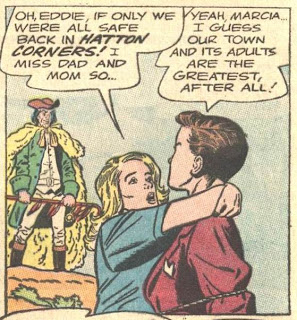 Mr Twister goes off to renew his powers.  Kid Flash helps the kids finish their tower: 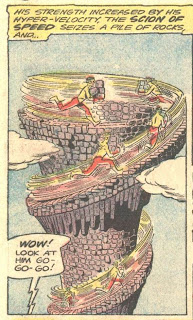 Robin follows the villain to an old Indian cave, where the secret of Mr Twister's magical staff is revealed to be a potion.  Meanwhile, Aqualad has discovered that the island on which the kids are trapped is resting atop a thin stalk of rock.  He commands some whales to move it away, getting gratitude from the teenagers and a little jealousy from Kid Flash: 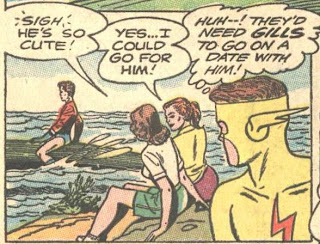 You can see the Marvel influence there; prior to this the DC superhero teams had the "all for one and one for all" attitude.  Mr Twister takes out his anger on the town with Earth, Fire and Water.  The Earth arrives in the form of a dust storm that Kid Flash sweeps out of town.  The Water is a flood, but Aqualad has a solution: 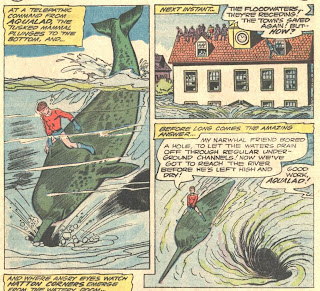 But after Mr Twister kayos those two, how can Robin stop a rain of fire?  Easy, just rope the staff that gives the villain his powers: 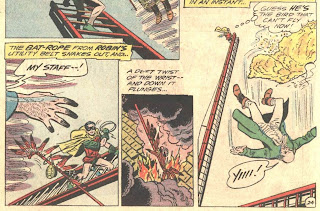 Comments: It never is explained why the town now gets out of the requirement to pay rent to Stikk.  The story is entertaining, if a little wince-worthy in terms of the teenage lingo.  Writer Bob Haney would struggle with that for years to come.  As noted above, there was no indication at the time that this was intended as a tryout for the Teen Titans as an ongoing series; that would have to wait until a year later in Brave & Bold #60, when Wonder Girl joined the group.  Competent artwork by Bruno Premiani; I especially like that scene with Kid Flash building the tower.
Posted by Pat at 2:55 PM

Hey there, you have a great blog. I've especially enjoyed your Legion of Super-Heroes posts. And, in fact, I'm reviewing the Legion (by Waid & Kitson) on my blog:

Feel free to check it out.

I thought of Stik's case years later when Bob Haney used a similar plot in a Green Arrow story involving a rose that has to be placed on a grave every day or Star City reverts to the family that originally deeded the land. Only the family's rich and powerful, so they stood a shot at collecting, unlike the homeless vagrant Stik.
I have a feeling that after the mass kidnapping, he had a hard time making a case.
-Fraser

Robin Working alone? where is Batman??

I love the comic ... I'd love to have this in my collection

From the cover picture of Robin it looks as though Sheldon Moldoff re-did the Robin heads inside a la Murphy Anderson with Supes in Kirby's Jimmy Olsen...