One of the hazards of comic books is that a writer may pen a story when the future seems far off and then time passes and suddenly that future is 20 years in the past. So it is with the Atomic Knights. They were formed in the dark days of 1986 after the nuclear holocaust that, as you may recall, didn't quite happen.

However, this was a terrific series nonetheless. In Strange Adventures #117 (June 1960), we learn that Gardner Grayle is a soldier in an underground bunker when World War III starts, with atomic bombs destroying much of the planet. He teams up with Douglas Herald, a schoolteacher, who's hoping to defeat a local tyrant called the Black Baron. By chance, they discover that a set of medieval suits of armor blocks the radiation from the Baron's rayguns, with which he has been keeping control of the local citizenry.

They look for volunteers to help them fill the six suits. Hollis and Wayne Hobard, athletic twins, join up, as does Bryndon, a scientist. However, the final suit proves too small for a grown man, so they leave that one behind. Herald also introduces someone else: 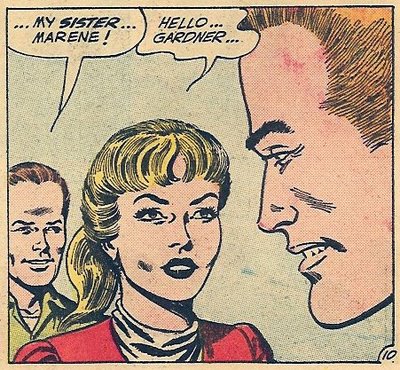 Of course, Marene and Gardner become an item, and following their deepening romance is one of the real charms of this series. In the origin story, the Knights attack the Baron's stronghold, but it turns out that in addition to the rayguns he's got an old rifle. Gardner is unsure that his armor will hold up to a bullet, but at the last moment he is saved by one of the other knights, who pushes the Baron aside, causing him to shoot wide. Gardner later discovers that his savior had been none other than Marene, who had managed to fit into the remaining suit.

The story continued every third issue of Strange Adventures over the next several years. Each was written by John Broome with superb artwork by Murphy Anderson. The stories tended to move forward sequentially; for example, in one story the Knights were attacked by Giant Dogs, but after taming them that issue in later ones the dogs were helpful.

The stories also featured the Knights traveling to different locations in what remains of the the US, with titles like "The Cavemen of New York" and "The Lost City of Los Angeles" and "Danger in Detroit". The series continued like clockwork until Strange Adventures #160 (Jan 1964), when the final instalment appeared. There was no announcement at the time that the series had ended. I suspect that what happened was that Murphy Anderson had been assigned to replace Joe Kubert on Hawkman effective with Mystery in Space #87 (Nov 1963), and that Atomic Knights just didn't fit into his workload any longer (remember that Anderson was one of DC's top inkers in addition to his fine pencils).
Posted by Pat at 5:41 PM