Daredevil first appeared in April 1964, in Daredevil #1. He was something of a new concept; a handicapped superhero. True, Don Blake was lame, but that disappeared every time he turned into the Mighty Thor. Daredevil was blind, 24/7.

We learn his origin in that first issue. Matt Murdock was the son of a prize fighter. The old man, known as Battling Murdock, was determined that his son should get an education. However, as Matt prepares for college, his dad's career is on the skids. The only manager who will handle him is known as The Fixer.

But Matt's life takes a sudden turn when he saves a blind man from being run down by a truck. The truck was carrying radioactive materials which hit Matt in the face, blinding him. However, he also discovers that he has gained incredible agility and his other senses (especially his sense of hearing) have become stronger.

This of course, makes Daredevil yet another Marvel 1960s superhero who gained his powers from radiation, like Spiderman, the Fantastic Four and the Hulk (and many villains as well, including the Sandman).

Meanwhile, his father's career has suddenly taken off. But, true to his name, The Fixer has been arranging for other fighters to take a dive against Battling Murdock. Now that the big fight is here, it's Dad's turn to lose. But with Matt in the stands he kayos the opponent, angering The Fixer, who has him gunned down in retaliation.

Matt decides to avenge his father's death, but he had promised his dad he wouldn't be a fighter. So he dresses up in a yellow and red costume and Daredevil is born: 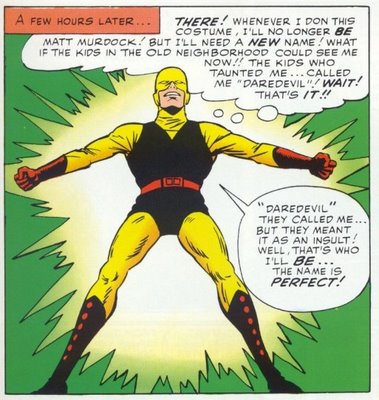 The yellow part wouldn't last long; perhaps it was seen as inappropriate for a character dubbed "The Man Without Fear". Which was another oddity about DD; all of Marvel's characters had a name like "The Mighty Thor" or "The Amazing Spiderman" or "The Incredible Hulk", but Matt Murdock was "Daredevil, the Man Without Fear".

In DD #2, Stan pitted him against Electro, who had previously appeared in Spiderman #9. This was one of many smart things that Marvel did in the 1960s. Although DC had done superhero crossovers for years, especially with the long-running Batman/Superman teamup in World's Finest, the villains tended to remain pitted against one superhero. This gave Marvel a distinct edge. Not only did they have to invent fewer villains (at least at first), but they could capitalize on the popularity of Spiderman and the FF by hiring out their villains.

However, that Stan was still thinking this stuff out on the fly is evident. The Thing arrives (yet another crossover!) at Matt Murdock's office to ask him to review a lease. Matt's out, so Thing delivers these instructions to Foggy: 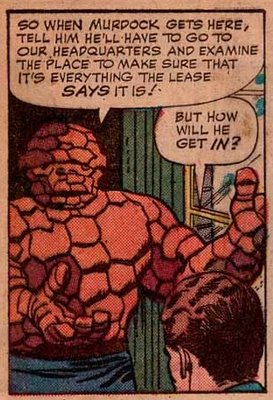 Yeah, okay, my blind partner will come out and inspect the premises.
Posted by Pat at 8:30 PM