The Silver Surfer and Galactus

As we have discussed, the Inhumans saga ended (temporarily) about six pages into Fantastic Four #48. But that issue was also significant for the first appearances of the Silver Surfer and Galactus.

The inspiration for the former is pretty obvious. This was the mid-1960s and there was nothing cooler among teens than surfing. Believe it or not, I actually got up on a board a couple times while visiting my cousins on the Jersey shore; the main impression I got was how fast you went; it was definitely a thrill ride.

As the FF returns from the Hidden Land after their encounter with the Inhumans, they discover that New York is covered with a fiery sky. What is going on? We also see the Silver Surfer for the first time, looking through the universe for a particular type of star and a particular type of planet orbiting that star.

It turns out that the Watcher had tried the fire as a way to conceal Earth, but since that caused panic among the humans, he revised his plan and tried hiding us behind a wall of space debris. But the Silver Surfer makes it through anyway and conveniently (for story purposes) lands on the Baxter Building. He sends a signal to his master, Galactus, who arrives with bad news: 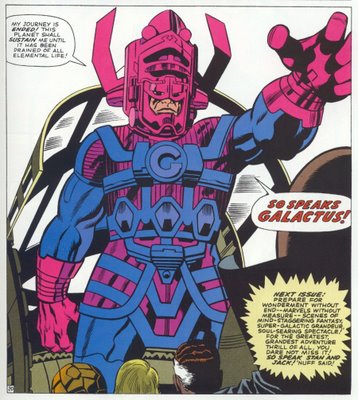 The Thing has punched the Silver Surfer away from the Baxter Building, but in the grandest tradition of coincidence, he lands atop Alicia Master's skylight. She treats him with kindness, and is horrified when the Surfer tells her of Galactus' intentions for Earth. We can see that he is swayed by her arguments.

Meanwhile, the Thing and Mr Fantastic have temporarily delayed Galactus' plan to drain the earth of its energy. The Watcher sends Johnny to the home world of Galactus, where a weapon exists that may stop him. And Alicia convinces the Silver Surfer to attack his master in an effort to save Earth.

In Fantastic Four #50, we see the battle between the Silver Surfer and Galactus. While the latter is clearly more powerful, the Surfer is not without some ability himself. Meanwhile Johnny is racing back with the weapon from Galactus' homeworld. He arrives in the nick of time and hands off the instrument to Reed. Threatened with potential destruction, Galactus agrees to leave. But first he strips his former herald of the ability to roam among the stars; he will be stuck on Earth.

These are terrific issues; at this point the FF was going from strength to strength, with Stan and Jack turning out memorable characters seemingly at will, from the Inhumans to the Silver Surfer and Galactus to the Black Panther, who would shortly make his initial appearance.
Posted by Pat at 7:59 AM