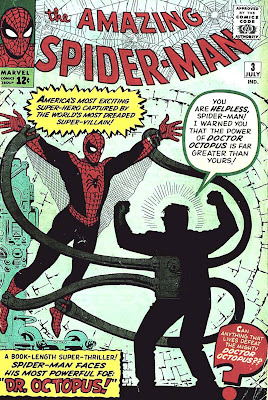 Anybody who read only the Steve Ditko issues of Amazing Spiderman would know exactly who was Spidey's arch-enemy, and it wasn't the Green Goblin. It was Dr Octopus, who was the first villain to appear in a two-part story (ASM #11-12,) the first to appear in a three-parter (#31-33), and who also headlined the first Spiderman Annual.

His initial appearance here also features the debut of the Spider-Signal: 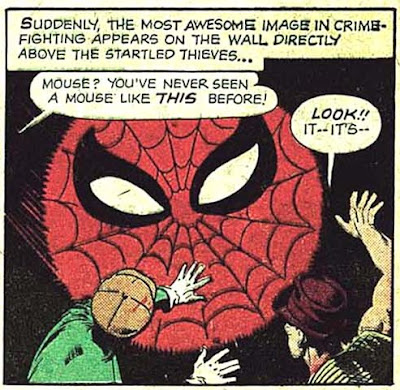 It's a neat reversal of the Bat-Signal, indicating that trouble is here for the crooks who see it. I don't recall it getting much use in the Romita era, other than on the cover to ASM #72.

We get our first glimpse of the good doctor here:

The apparatus he uses is vaguely similar to a "Waldo": 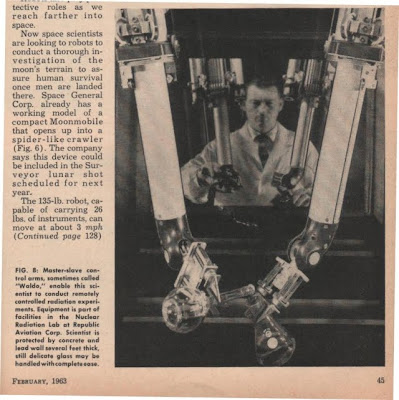 Incidentally, the name "Waldo" for that device, which allows scientists to handle dangerous chemicals and elements from behind a protective barrier, comes from a Robert Heinlein short story.

But Doc Ock gets a little careless and: 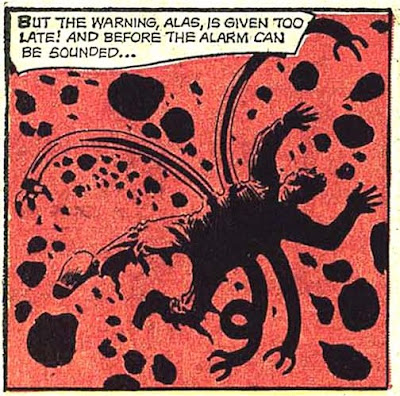 With the result that the arms are grafted to his body and he's just a mite touched in the head. He takes over the hospital where he's been recovering. Peter gets involved when JJJ demands that he obtain some pictures. As with Clark Kent's job at the Daily Planet, Parker's employment at the Bugle guarantees he'll know where he's most needed.

As Spidey climbs up the outside wall of the hospital, he muses that it's all too easy; he almost wants a villain worthy of his talents. In fiction as in real life, that's just begging for trouble and sure enough, Spiderman discovers that Doctor Octopus is a handful and more:

Spidey is thrown unceremoniously out a window. Doc Ock returns to the atomic research center where he worked, and makes it into his own fortress. Meanwhile, Peter mopes about, having never been defeated before. Fortunately the Human Torch comes by his high school to give a demonstration and a pep talk: 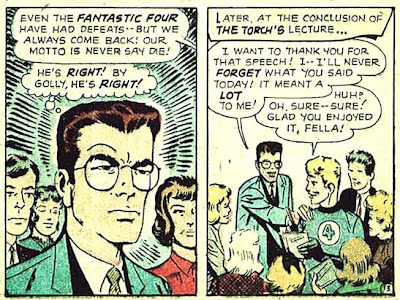 Once inside the atomic research center, Spiderman puts his science background to work: 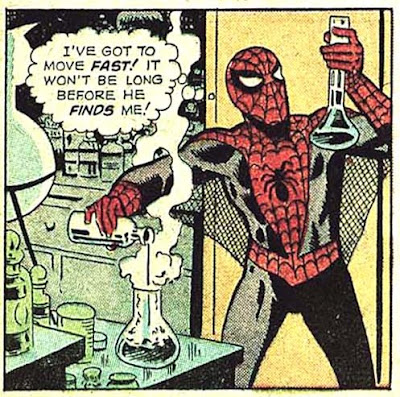 He creates an acid that fuses Doc Ock arms together. But he's still hard pressed until: 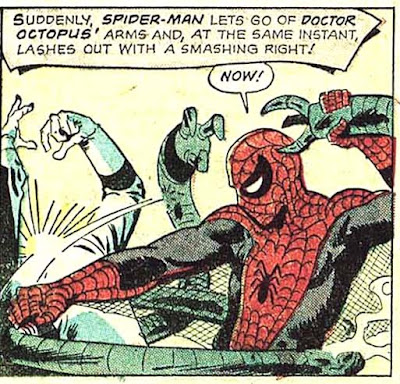 Comments: Solid, entertaining story with the usual terrific Ditko art. I particularly liked the bit with Peter sulking about after being beaten; that's a common teenaged reaction.
Posted by Pat at 10:18 PM

Were there any issues of Spider-Man not done by Ditko...?

Okay, give Romita his due, his stuff was lovely to look at, but it pales somewhat next to Ditko's. By his own admission he was merely marking time waiting for Ditko's assumed return.

Those 41 comics by Lee and Ditko still stand tall as probably the definitive take on the angst-ridden super-hero -- deservedly so.

I like this Spiderman. He is a scientist and a student. He uses his wits as much as his fists.

Allan, I assume your 41 includes the AF #5 and two ASM annuals?

The Ditko run on ASM ranks as one of the pinnacles of the Silver Age.

The Doc Ock vs. Goblin question is an interesting one. Whereas Ock gets a lot of ballyhoo as you mentioned, I always found it interesting that Goblin was the first Spidey super villain to be treated with such an intentional air of mystery. I think it ups his importance, even early-on, because while Doc Ock made more appearances and was more persistent, anytime Goblin showed up, you were left wondering why Lee/Ditko were making such a point to keep him shrouded in mystery.

And while I can tell this won't win me any friends around here, I do prefer Romita to Ditko. Ditko was obviously spectacular, but I compare his artwork to a dense piece of chocolate cake. It tastes good, but you're so full by the end you stop enjoying it. You're very clearly looking at a comic book character with Ditko, whereas I feel like Romita's art transcended comic book conventions.

I love both Ditko's and Romita's art on Spiderman, but I did prefer Ditko's plotting. Plus Romita made Peter just a bit too hip, while de-emphasizing his science skills.

As it happens though, I'm mostly reading the Ross Andru run, and his art definitely has me pining for the earlier guys.