Darwin of the Guardians 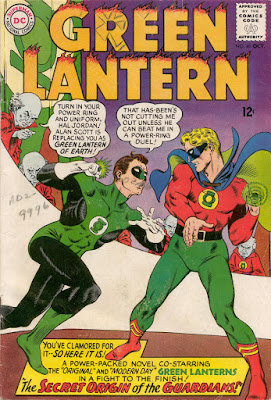 I confess I had not read this story in decades and it didn't make much of an impression on me back as a teen. But re-reading it last night, I have to confess I was flabbergasted.

The story starts with the Golden Age Green Lantern protecting Gotham City from a falling meteor. As it happens, the meteor hits a tree, which is about to fall on Doiby Dickles' taxi, Goitrude. GL is shocked when his protective beam deflects the tree, as his power ring has never worked on wood. He has an idea:

But when he reaches Hal Jordan, it turns out that his beam still doesn't work on wood. Hal suggests that he get the ring to tell him what really happened. It turns out the meteor wasn't a meteor, but a disembodied mind inside a packet of pure energy that was ten billion years old. The ring contacted the mind and learned it was from the planet Oa. The Oans were immortal and used their time to learn things: 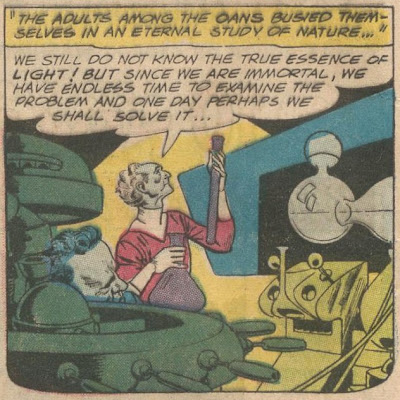 But there was one forbidden subject: 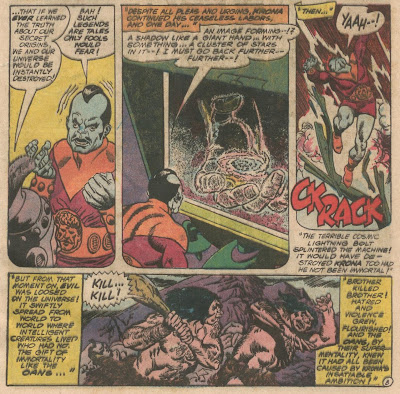 And right there I came to a screeching halt. The pursuit of knowledge about the Oans had led to the invention of evil? That doesn't make a whole lot of sense, and the "reasoning" behind it is the classic fallacy of post hoc ergo propter hoc (after this, therefore because of this). Krona insisted on continuing his pursuit of the origin of the Oans, and so they:

Since one of their fellows had unleashed evil on the universe, they started the Green Lantern Corps to battle the malignant forces.

When the GA Green Lantern's power beam contacted the mind of Krona, he used it to free himself and followed Alan Scott into our universe. The Oans, alerted to the danger, warn the two GLs that they cannot locate Krona by normal means, but to expect an outbreak of evil nearby. Sure enough:

After handling the various crises, the Oans summon the two GLs to their home planet, where the cover scene takes place. Hal does not accept his demotion gracefully: 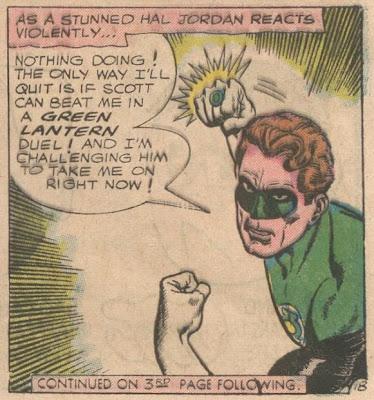 And yet, a moment later he seems surprised that Alan's not laying down for him: 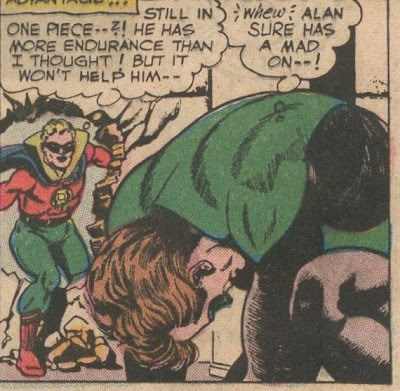 Via a flashback, we learn that Alan's body has secretly been taken over by Krona, and that the Guardians are being controlled by the GA Green Lantern's ring. But (and this is a key point) Hal doesn't know this yet. So his revolt against the Guardians and his battle with Alan are not excused by this knowledge.

Krona erects a yellow shield to protect himself and then kayos Hal, after which: 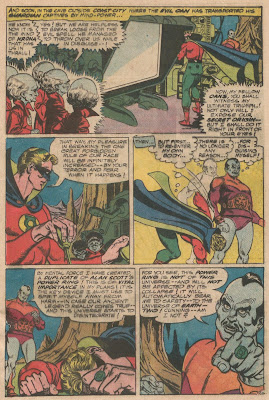 We can see that Krona is rather reckless with other people's lives but not his own.

But Alan's disembodied mind contacts Hal, wakes him up, and the two combine their willpower to defeat Krona, with the aid of some trickery; Hal uses the GA power ring rather than his own so that yellow won't work against it. Krona is sent back on his endless journey, but this time the Guardians make sure his orbit will never intersect any planet or star.

Comments: The story can be taken as an allegory to the book of Genesis, with Oa before Krona as the Garden of Eden, and Krona as Adam releasing evil by eating from the Tree of Knowledge. According to the letters column in GL #43, that was the way writer John Broome intended it: 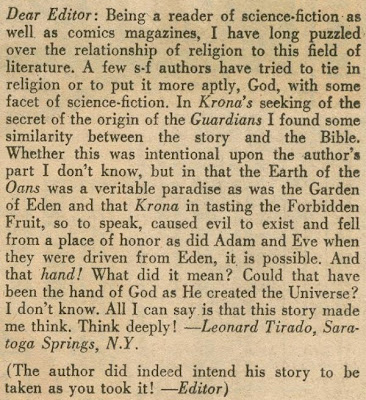 But you can also read it as anti-science, and anti-Darwinian. That the Oans turn out to be correct in their ancient superstition against studying the origin of their species is hardly surprising. It's a basic principle in fiction that the Cassandras of doom are always proven right (as was the original Cassandra, who warned the Trojans against bringing the wooden horse into their walls). But I have a hard time believing that the Oans were justified in their original banishment of Krona. Given what happens in this story you can argue that the subsequent exile was merited, but you can also argue that ten billion years as a disembodied mind might be the cause of his callous disregard.
Posted by Pat at 10:34 AM

Something that makes Krona a great villain is the key element of the reader being able to identify with him slightly. I know I can't read this story without thinking I'd be just as curious.

For whatever it may be worth, when SF writer Larry Niven wrote a pitch for Green Lantern (sometime in the late Eighties, I think) he rationalized this story as an obvious fairy tale concocted by the Guardians to conceal a darker secret. Niven fan John Byrne subsequently nicked this idea for a GL one-shot he produced some years later. Both of these developments came after Marv Wolfman used this same issue as the centerpiece of Crisis on Infinite Earths. My point is, this one daft story that doesn't stand up to the slightest bit of scrutiny has been used as the basis for a lot of ill-advised later embellishment.

In fairness, the punishment is pretty standard for the Silver Age——the Crime Syndicate's imprisonment between dimensions for decades was pretty harsh too.
I think this bothers me less than the usual Mad Scientists Should Not Tamper With God's Domain theme because it's clearly a literal thing--God really doesn't want them probing this stuff for whatever reason (and the shot of the cosmic hand was really cool)--rather than superstition. And Silver Age GL is hardly an anti-science series.

Once upon a time, GL #40 was a VERY expensive comic book.