Back when I was a young teen collecting comics, I remember picking up this issue at a garage sale and boggling: 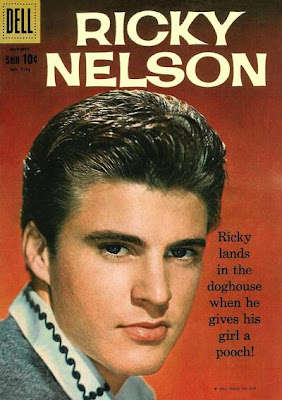 Under "Still 10 cents" it says "No. 1115". I was flabbergasted. I knew that Ricky Nelson had starred with the rest of his family in The Adventures of Ozzie and Harriet for a very long time (in fact, that show is still the second longest-running sitcom in US history, behind only the Simpsons), and that he'd had some success as a rock star, but the idea that his comic had over five times as many issues as Superman (back then) was simply impossible to conceive.

And, of course, it wasn't true.

DC did not originate the concept of a tryout magazine, where new features could be tested to see if they sold. They borrowed the idea from Dell Comics, which had a series simply entitled Four Color Comics. Dell published approximately 1350 issues under that name, which I believe is still the all-time record for a single series in the United States, even though the last Four Color issue was published in 1962. Since the first issue appeared in 1942, it is obvious that they put out about 60 comics a year under this line, or five per month. And four of those issues, not 1100+, featured young Mr Nelson.

The Four Color line included the debuts of many long-running series for Dell and its later successors, including Donald Duck, (#9), Felix the Cat (#15), Roy Rogers (#38), Little Lulu (#74), Pogo (#105), Woody Woodpecker (#169). Of course those features had appeared elsewhere, but these were the tryouts that got them their own comic titles. Four Color also featured the first appearance anywhere of Uncle Scrooge (#178).

The Four Color series did create one problem which caused endless anxiety for collectors in the days before the Overstreet Guide. Dell would run, say, four tryout issues for Spin and Marty (a serial about two boys on a dude ranch that ran on TV in the Mickey Mouse Club), spaced out over a number of months, and if the sales justified it, they would start issuing the feature in its own magazine, starting with #5. Which meant that collectors might search forever for the elusive #s 1-4, not realizing that they bore issue #s 714, 767, 808 and 826 on the covers.

The most valuable issues in the Four Color line are generally the early Donald Duck appearances by Carl Barks, but there are plenty of cheap issues from the 1940s-1960s offering fine quality entertainment.
Posted by Pat at 1:34 PM

Ricky Nelson and Kirk Douglas were guests on Dinah Shore's talk show in the 1970's. Douglas quipped that he remembered coming home from school and watching "Ozzie and Harriet" when he was a child. Given the show's longevity, one can almost believe it.