I love reading the DC war titles of the Silver Age; for the most part they have excellent art and entertaining stories. But there is one major problem with reading a bunch of them consecutively, and that is that the main features recycle plotlines consistently.

I've talked in the past about Gunner and Sarge, and how many of the stories featured the same action with Gunner acting as the decoy and the Sarge figuring out where the enemy was located by their fire at his counterpart. The Johnny Cloud stories always had some incident from his youth as a Navajo relating to his problems as an air ace in WWII. In the Haunted Tank series, the ghost of Jeb Stuart would give cryptic advice to his namesake, which inevitably proved prescient.

The Sergeant Rock series was no exception to this trend. The standard plot outline involved Rock being concerned about something that Easy Company is doing wrong that could lead to disaster. For example: 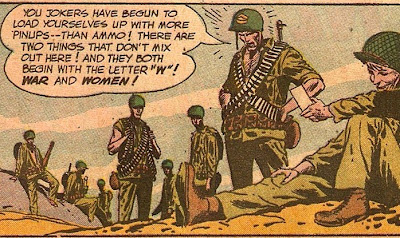 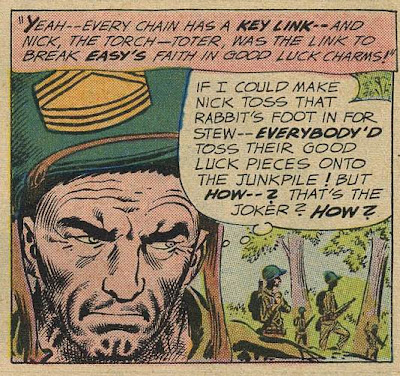 That bit about Easy Company being like a chain came up often. Sarge was as fanatical about eliminating the weakest link as Anne Robinson: 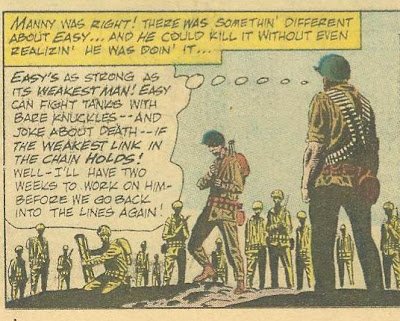 There would then follow several rapid-fire combat sequences proving Rock was right: 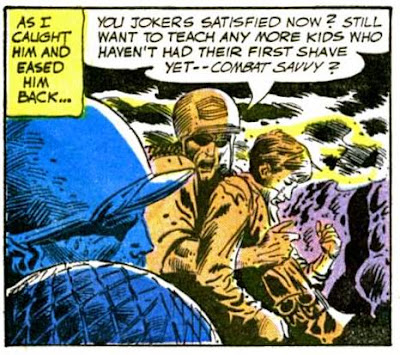 Or sometimes the combat-happy Joes would appear to be right for awhile: 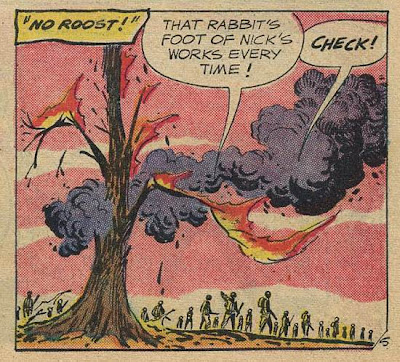 Thus increasing the pressure on Rock to prove them wrong. In the end there was always a resolution, although I admit that Kanigher (who wrote these stories) was willing to be more creative in his denouements: 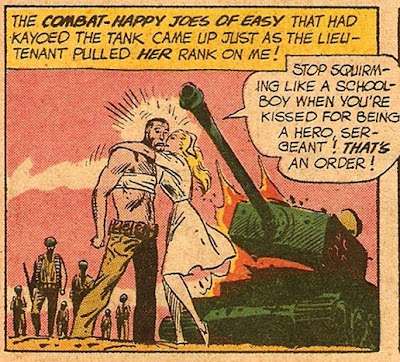 So I recommend these DC war series, but also caution that you should probably read them as they were published; with a month or two in between each issue.
Posted by Pat at 11:55 AM

I ran into the same phenomenon while power-watching old Loony Tunes/Merry Melodies cartoons. I love those old 'toons, but I never noticed before how they only had three plot-lines. :D

You can see the same thing in the various series that ran in the science-fiction titles that Julius Schwartz edited. In the "Star Rovers" stories, each of the three characters would have a strange experience, then compare notes with the other two to solve the mystery. In the "Space Museum" tales, the father would show his son one of the objects on display and begin to tell the story behind it before challenging the boy to figure out how the object led to the story's resolution. And nearly all of the Adam Strange stories began with Adam catching the zeta-beam to Rann, which was facing some dire threat, which Adam would overcome just before being drawn back to Earth. -- Jim

The formula is part of the charm though with a lot of these books from this period. The same could be said of just about any DC book of the time from Batman to Lois Lane to Sgt Rock. Despite it's repetitive plots Rock holds up a lot better than Lois Lane and Adam Strange. I've just read the first showcase volumes of Rock and Haunted Tank and both made an excellent long read although Rock was better.

Adam and Alanna actually joked about the fact that his arrival always coincided with a menace. But the stories were so much fun, it didn't bother me.

Wasn't there a story written to explain why Adam's appearances coincided with a crisis on Rann?

If I had been Lt. Jeb Stuart, I would have gotten fed up with the ghost's cryptic advice. "Why didn't you just tell me that the nurse was a spy instead of making vague warnings about how appearances can be deceiving?"

Individually, the Sgt. Rock stories are effective. Collectively, the repetition becomes obvious. That is a problem with series in general. The tragic love stories on Bonanza, Star Trek, and Xena may have had a strong emotional impact the first time, but became cliched' from overuse. People still make jokes about how if Captain Kirk or Ben Cartwright fell in love, the woman was doomed.