The Curious Case of the Time Trapper

Faithful readers of the Legion of Superheroes must have been confused at this sequence, which appeared in Adventure #317:

Why confused? Well, it turns out that this was the first mention of the Time Trapper in a Legion story. At the very end of that story (which mostly did not concern TT) came a semi-explanation: 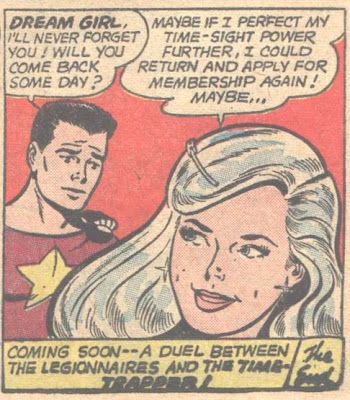 In the next issue, we got our first glimpse of the villain: 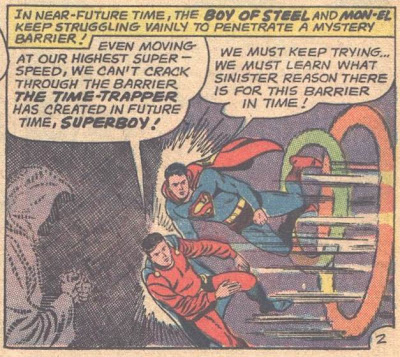 Note in particular his physical appearance there. Over the next year or so, we'd see more futile efforts by the Legion to break through:

The Time Trapper turned out to be working behind the scenes in that story, trying to find out the secret of the Legion's super weapon, the concentrator: 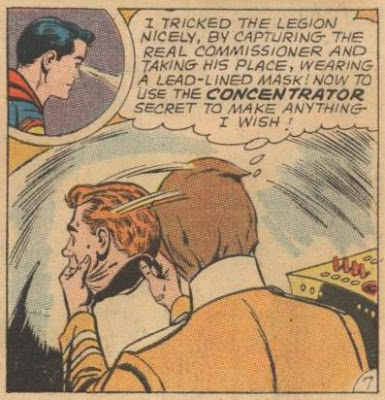 But it turns out that he does not have the real secret of the concentrator and flees into the future again. Amazingly, the Time Trapper story would not be resolved until Adventure #338, almost two years after he was first mentioned: 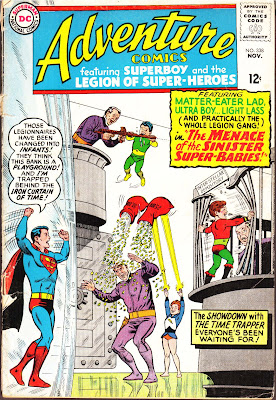 In that story, the Time Trapper has recruited an evil female, Glorith of Baalour, to help him doom the Legion. We get a strong indication of the plot here: 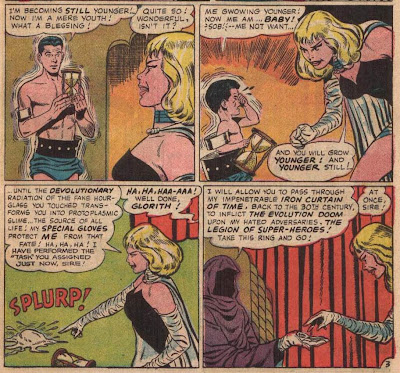 However, when she tries the trick on several members of the Legion, they do not regress in age past babyhood: 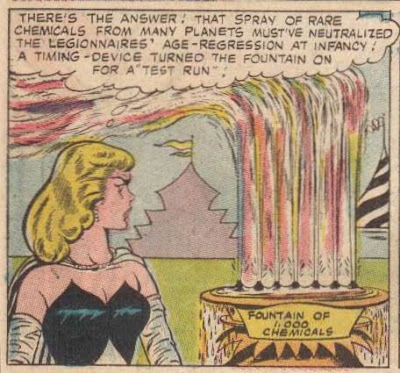 Frustrated in his plot to turn the Legion into blobs of protoplasm, he joins Glorith, after first letting Superboy and Brainiac 5 through the Iron Curtain of Time. He leaves them trapped in the future and sets about training the baby Legionnaires to rob for him:

Then he brings them to a planet where elements in the atmosphere will resume their devolution. But this causes problems, too:

But one of the babies has spotted the Time Trapper's ring, which is responsible for keeping Superboy and Brainiac 5 in the future. He switches it off, allowing them to join the group. The Trapper makes a proposal: 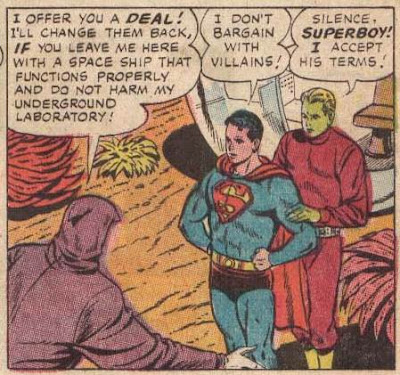 Brainiac 5 agrees, but there is a trick: 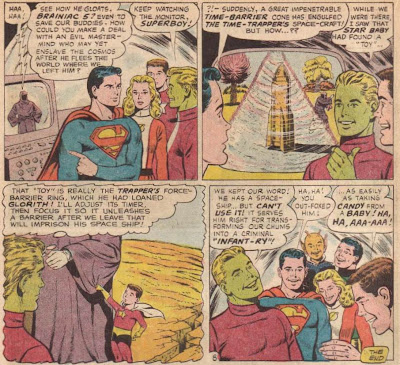 End of story? Well, yes and no. Yes, in the sense that it quite literally is the end of the Time Trapper in the Silver Age; he did not appear again outside of a hallucination sequence in Adventure 363. Which, if you think about it, is very odd. Here's this villain whose confrontation with the Legion had been built up over the course of two years, and yet they dispose of him in a single 16-page story? It doesn't make a whole lot of sense. So I began digging for clues and speculating a bit. The first clue is that initial mention of the Time Trapper in Adventure #317. It appears obvious that there was supposed to be a Time Trapper story which appeared before that, but which was bumped for some reason. And if we look at the cover to Adventure #317, we get a pretty good second clue: 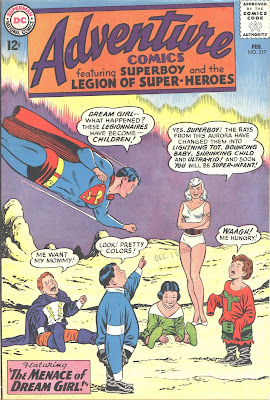 Speculation: Perhaps the Time Trapper story which appeared in Adventure #338 was intended to appear just before #317, but editor Mort Weisinger belatedly realized that this would give him two consecutive stories featuring Legionnaires turning into babies? This fits, especially when you consider that Adventure #338 was written by Jerry Siegel, while #317 was written by Edmund Hamilton. Weisinger could have instructed Hamilton (or artist John Forte) to include a couple panels mentioning the Time Trapper.

There are certainly still some problems with this speculation. For example, the story does not end with the Time Trapper in the future, creating the Iron Curtain of Time. But this objection is easily overcome; Weisinger simply had the ending of the story rewritten because now it took place after the events in #317, instead of before. Note as well that the story in Adventure #338 did not explain what secret the Time Trapper was supposedly concealing from the Legion in the future. 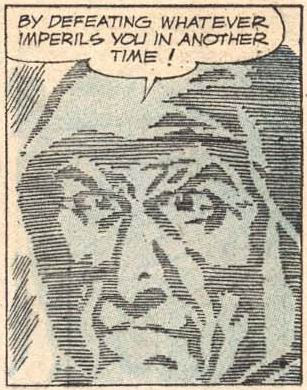 Interesting post. I'd always thought that those first references to the Time Trapper were an early experiment in foreshadowing--a device that's common in comics nowadays but was rarely used in the Silver Age, when stories tended to be more self-contained. But your speculations make a lot of sense.

It might be worth noting that this story appeared during the Cold War, when the Soviet Union and its eastern Eiropean satellites were said to be behind the "Iron Curtain." (The phrase was first used in that sense by Winston Churchill in a 1946 speech.)

Interesting notion, but I'm not convinced. It seems more likely that the first story published was indeed produced first, with the Time Trapper a convenient way to take the most-powerful members away from the Threat of the Month. At some point editor Mort Weisinger would have decided to satisfy readers clamouring for a resolution to the turned-into-a-subplot. As he didn't actually have a strong story to go with the tossed-off notion of an Iron Curtain of Time, we wound up with the less-than-epic Glorith story.

I love that in some panels there John Forte has city actually drawn a curtain ...

Interesting, even though the first story never struck me the way it did you: I thought of it as the equivalent of stories where the villain's already launched his crime wave by the time we open ("Maybe tonight we'll catch up with the Raven, the mysterious villain stealing priceless Edgar Allen Poe memorabilia!").
It may just be that Siegel did a really crappy job resolving the Time Trapper plotline (reducing him to a straight robber seemed most inadequate). I've often wondered what Hamilton had in mind, or if he had an ending in mind.

Part of it may have been the way I read the stories way back then; I started reading the Legion in 1968 and filled in the collection over time. I had #318 and #321 fairly early and they convinced me that there must be an earlier Time Trapper story. So I kept buying the earlier issues and/or reading reprints as they became available It took me a long time to realize that aside from the brief mentions in #317, he really hadn't been seen.