Why I Love American Comics Group

It occurred to me recently while I was reading My Romantic Adventures #115 (Nov-Dec 1960). I've talked a lot about ACG in the past. They were a relatively minor but regular publisher of comics in the Silver and Golden Ages; all told they put out about 1150 comics over the course of about 22 years, or roughly 50 comics a year, four comics a month. Most of their comics were written by their editor, Richard Hughes, under a variety of pseudonyms. Why do I love ACG? It's so simple that I can't believe I never put my finger on it before now. It's because Hughes was a master at creating interesting characters. And when you consider that most of ACG's stories were one-shots, that becomes even more remarkable. Here's the splash page that brought it all home to me: 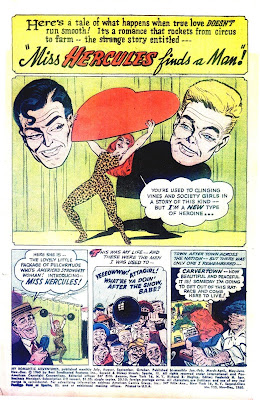 Now that is a unique character: a female weightlifter who dreams of settling down in smalltown America. That makes for an interesting premise, but Hughes doesn't stop there. He creates a story that fits that character. Our Miss Hercules, Marcia Simms, gets enough money from the sideshow act to buy herself a farm in Carvertown. And it's not long before she attracts the attention of a handsome neighbor: 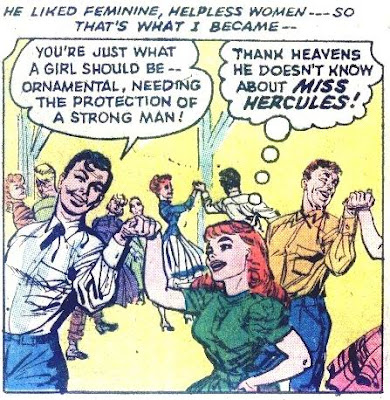 But as you can probably guess, he is not the right man for her particular character. She's not weak and helpless. Soon after, she introduces herself to another neighbor: 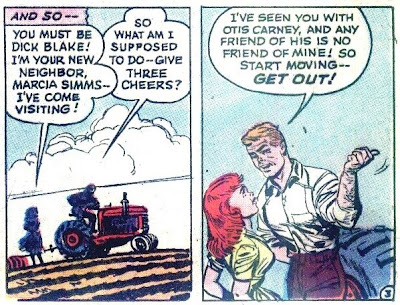 She finds out that Blake had gone to prison for a hit-and-run accident that he claims he didn't commit; in fact, he blames her beau, Otis, for framing him. And to get even, he steals a kiss: 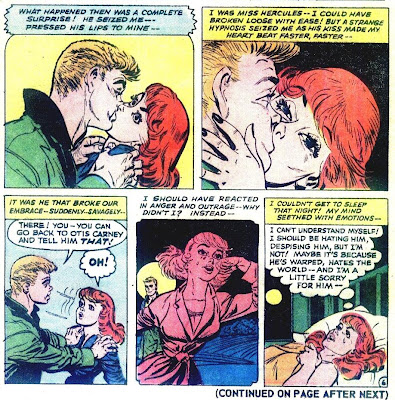 She tells Otis what happens, and while he seems to shrug it off, later that night she hears the sound of raised voices at Blake's farm. Otis and a couple of his buddies intend to beat up Blake. And at last we see why Hughes made her a weightlifter: 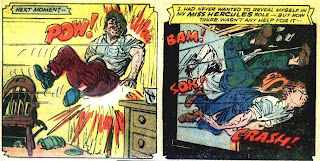 Working together, they prove that Otis had indeed framed Blake for the hit-and-run accident, and fall in love.

In that story, Hughes has his protagonist use her singular characterization at the end. But in other stories, it is not uncommon to have the character have to overcome a major trait.  Another romance story from ACG  concerned a gal who's something of a klutz: 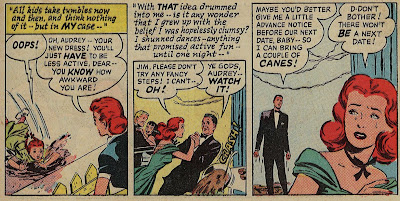 In that story, a key moment arrives when the man she loves is trapped on a girder and she must overcome her awkwardness: 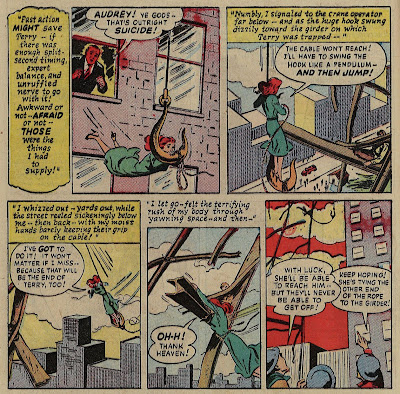 That, my friends, is superb characterization.

Hughes particularly liked to present us with downtrodden characters who suddenly succeed against all odds.  Americans love the story of an underdog who makes it big. The paragon of this character is obviously Herbie, the "big nothing" to his father who turned out to be one of the most powerful men on Earth.  But there are many other examples in the ACG canon. For example: 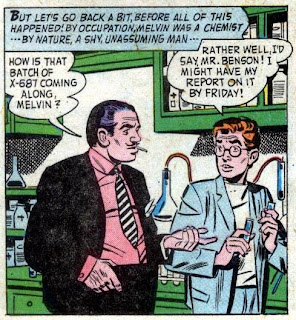 The shy, unassuming guy invents a potion that turns him into a strongman: 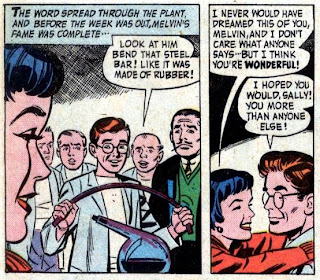 He becomes famous, and suddenly attractive to women: 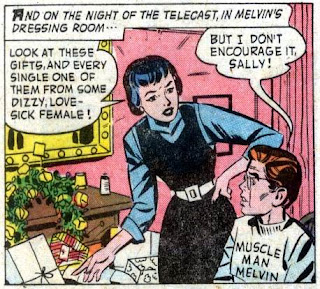 But eventually Sally realizes that she liked the old Melvin better, and Melvin remembers that he did it all to impress her: 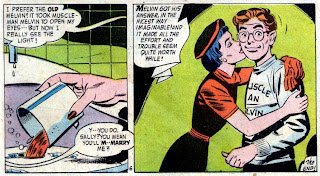 Want to read about interesting characters?  Check out the ACG line.
Posted by Pat at 2:10 PM