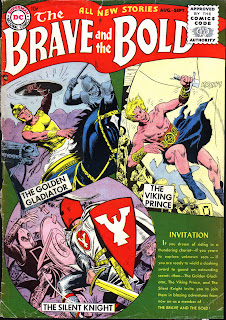 Although it became known in the 1960s as a tryout magazine, and later as a team-up comic, the Brave and the Bold started out as a swashbuckler.

The comic opens with the Golden Gladiator, by France Herron and Russ Heath. The GG only lasted for the first four issues, before the magazine converted to a complete medieval format with the addition of Robin Hood.  Marcus is a young shepherd, falsely accused of attempting to kill a Roman noble.  He is sentenced to the galleys as a slave, where: 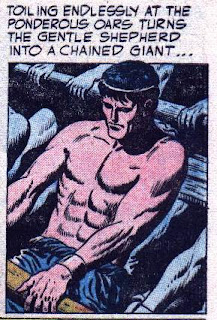 You may recall that a similar origin was proposed for Conan's muscles in the first Arnold Schwarzenegger movie.  A lion gets loose in the galley and Marcus manages to break his chains and kill the beast with them.  The slave-master realizes his young oarsman will fetch a good price as a gladiator.  Unfortunately for our hero, he is sold to Cinna, the Roman who accused him of attempted murder. 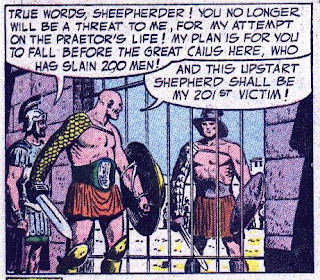 But Marcus defeats Caius in battle.  His gallantry in battle wins the heart of Cinna's beautiful niece: 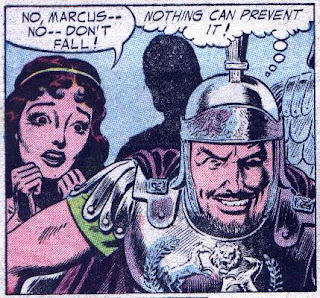 In a surprise, the Praetor announces that the gladiator who wins the chariot race will be set free, and become the Golden Gladiator.  But Cinna has plans to prevent that; he gives his favored gladiator a sword, while equipping Marcus with but a shield.  However: 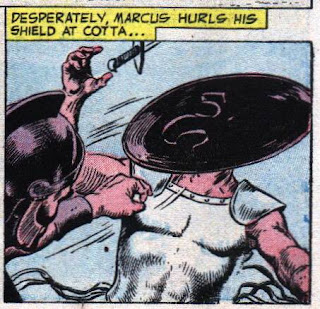 And Marcus rides on to victory, although Cinna still plans to find a way to kill him in the future.

Comments: Entertaining origin story and terrific art by Heath.  Check out the design on Cinna's breastplate in that next to last panel above; just marvelous details. The plot bears quite a resemblance to the novel Ben-Hur, but unfortunately for the feature the famed movie featuring Charlton Heston was still a few years in the future.  Trivia bit: Did you know that Ben-Hur was for many years the best-selling American novel of all time, until the publication of Gone With the Wind?

The issue continues with the Viking Prince.  The story begins with a fishing skiff picking up a young warrior, nearly drowned in the sea.  He has amnesia, but we quickly learn that he was the subject of an attempted assassination by a Viking lord named Thorvald. 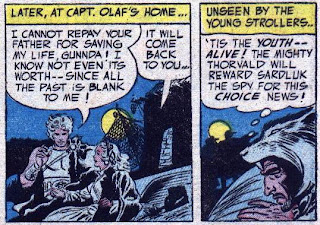 Thorvald's guards attack the Captain's home, but the young Viking proves adept as a fighter:

Gunnda names him Jon, after a fighting prince of yore.  Jon trains the fishermen in the manly arts of combat, while they teach him whaling.  The former comes in more useful:

The dragon ship rams the fishermen and things look dire.  But they load Jon onto the giant crossbow used to harpoon whales and he rips apart the sail of the warship.  Then, just as it looks as if Thorvald's men will overwhelm the Viking Prince, the fishermen board and take command of the vessel: 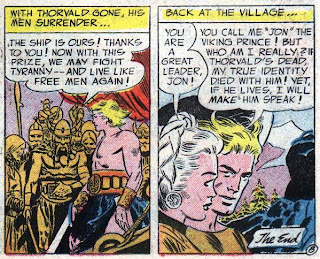 Comments: Another fine story by Bob Kanigher and adept art by Kubert.

The finale features Silent Knight.  Brian Kent is a young prince whose father ruled jointly with Sir Oswald a kingdom "South of the Thames".  Sir Oswald kills his father during a tournament, and there is strong indication that foul play was at work: 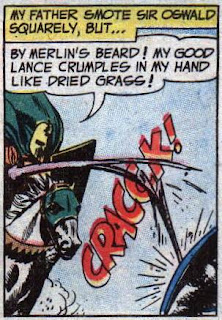 Sir Oswald assigns Sir Grot to train the young Brian in the ways of knighthood.  Grot is a crusty and difficult tutor, and Brian finds it difficult to win his praise despite his obvious ability: 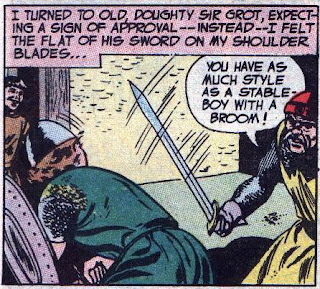 He also learns about falconry, and when he scares off Slasher, Sir Grot's prize bird, he chases the animal into the forest, where he discovers: 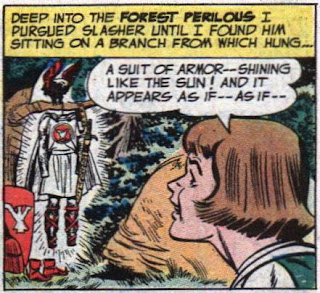 After trying on the armor, he overhears some of Sir Oswald's men waylaying some travelers (including the requisite fair maiden).  He springs to their rescue, but when the men demand his name, he realizes he cannot speak without revealing his true identity.  Thus they dub him the Silent Knight.  With the help of Slasher, he defeats the brigands and leaves the armor back in the hidden glade.

Comments: Kanigher and Irv Novick team up on this solid origin tale.  Overall the issue was quite entertaining and it must have been at least moderately successful, as the swordfighting continued for the next four years.

Another nice write-up, Pat, about a title I have always enjoyed. (These early years would make a great Showcase Presents.)

I wonder if this experiment -- a true "adventure" comic -- was influenced by EC's Valor, which debuted just a couple of months before B and B. It folded after a few issues, but that may have been more to do with the post-investigation fallout than the content.

I imagine the trend in movies toward big Biblical and historical epics that were competition for TV may have been an influence, too.

These were inevitably tightly told, well drawn stories, and though I think Russ Heath did not reappear after the Golden Gladiator was axed, the artwork and stories were still above average when Robin Hood took his place.