The Continuing Dilemma of Brainiac 5

Mort Weisinger and his writers had continual problems with the Legion of Super-Heroes.  In a way, this is not terribly surprising.  The Legion was initially intended for just one story, the original tale in Adventure #247.  But a few issues later, Mort began putting letters pages in Adventure, and while I haven't been able to locate any letters that were actually published, it seems logical to assume that at least some fans wrote in requesting a return of the superhero team.  And so, over time, they became a regular part of the Superman family, eventually supplanting Superboy himself as the cover feature in Adventure.

But the process was not without some growing pains.  Because the stories had been written on an ad hoc basis, there were contradictions here and there.  For instance, in the initial story, the Legion was set 1000 years in the future: 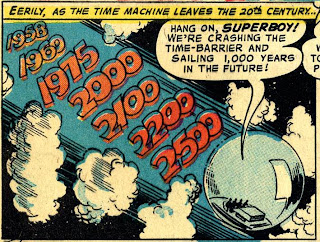 But in some stories, the Legion was set only 100 years in the future.  This seems like a minor problem, except for one thing.

In Action #267, Weisinger gave Supergirl a tryout with the Legion.  However, either he or his writer for that story, realized there would be problems with having Supergirl and Superboy in the same club.  After all, wouldn't Superboy then know that a Supergirl would arrive on Earth several years later?  So they made the Legion that Supergirl tried out for the descendants of the original LSH: 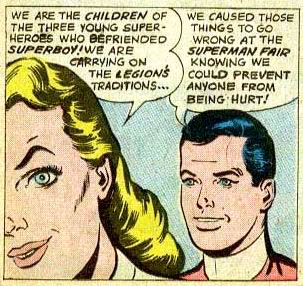 As I have discussed in the past, when DC reprinted that story years later, they edited the text, so that Supergirl was joining the same Legion.  In the interim between the two appearances, Weisinger had come up with a solution to the dilemma of having Superboy know of the existence of a Supergirl in the future.  Supergirl had hypnotized him into forgetting her except when he was in the future.

But there was another problem that popped up that never was resolved in the Silver Age. Supergirl actually was rejected for membership in the Legion in that first story, although there was a reason.  She had been exposed to Red Kryptonite, which turned her temporarily into an adult.  Since the Legion was for teenagers only, she was unable to join that time.

She finally made the grade in Action #276.  In that issue, she met another applicant, with a strangely familiar appearance: 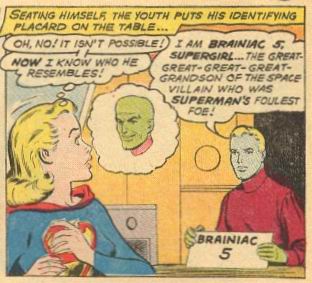 A further dilemma was introduced in Superman #167, when we learned:

Weisinger and his writer had a ready explanation for Brainiac 5: 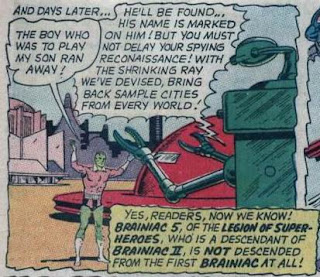 Except that doesn't really explain anything.  For starters, if Brainiac II escaped and despised the original Brainiac, why would his descendants continue to be named after the computer?  So maybe they did find him and brainwash him into thinking that Brainiac was indeed his father.  But there's still a problem. Remember, Brainiac 5 supposedly had a super-genius mind; that was his super-power that got him into the Legion.  But Brainiac II was just an ordinary boy (from a planet where the inhabitants had green skin).  How did his descendants get so smart?

By the way, DC has now apparently decided to ignore the story in Action #276.  Remember, this was the story that showed Brainiac 5 and Supergirl getting inducted into the Legion: 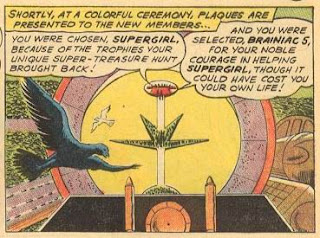 But in modern reprintings of Adventure #247, the original Legion story, one of the characters in several panels has been recolored to look like Brainiac 5.  For example, in the Millenium edition: 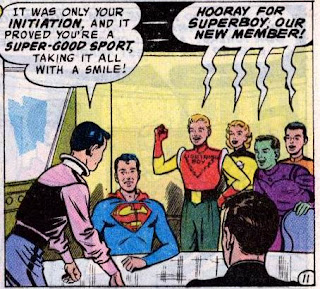 But in the original there was no green-skinned lad: 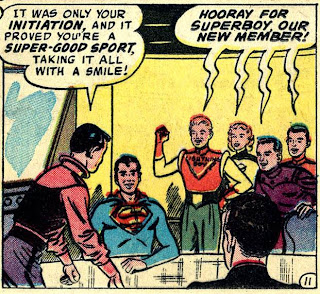 Good post....the really freaky Weisinger mistake was the Adult Legion story in 1966 or '67....made no sense on a bunch of levels !

I used to wonder, when reading these stories first time around, why Superboy didn't just stay in the 30th century permanently. 3K technology was certainly nearer to that of his home planet, he had lots of contemporary super-kids to hang out with and there was no snoopy Lana Lang getting in his hair. 1920s Smallville must have been terribly dull place to be.

Because the 30th century is a nice place to visit, but he wouldn't want to live there? Superboy can leave Smallville whenever he wants - it's not like he needs to get the car keys from his parents and drive for a hour to get anywhere interesting.

Was the "5" issue patched sometime in the modern age with the idea that "Brainiac" had become a some sort of position or title, like we speak today of a "Czar" (more than a thousand years later from the original "supervillian" named Julius Caesar)? So there might have been a title-holder only once every couple of hundred years. Or they may have only started that position relatively recently. A lot can happen in a thousand years.

Great post. Of course in comparison to the mess that more contemporary writers have made of the Legion's continuity Weisenger and his writers did rather well!

I have the first 3 archives and my impression is that the stories always took place in the 30th century but thru some editorial oversight some stories began by saying it was the 21st century.

Pete, Smallville (along with Bayport) was the small-town crime capital of America! If Superboy ever left there, the town would be overrun with mobsters.

The second panel of Adventure #300 tells us that the Legion exists in the 21st century, and when Superboy heads to join the Legion, he thinks "21st century, here I come!"

As I have pointed out before, unfortunately you can't always trust the archive editions to be true to the original stories.

I see your point. Since we're talking about the Legion, what about the Clubhouse? Did it have underground rooms or was it like Dr. Who's phone booth - bigger on the inside than it was on the outside?