A Robot Did What?

I don't know why, because I've always been an avid reader, but for some reason, while reading comic books of the early 1960s or before, I tend to ignore the text features that appeared in many of them.  But today I happened to be reading Magnus, Robot Fighter #2, and I saw that the text story was entitled "The World of Robots... Today!"

It describes the many robots at work around at the time (1963) including thermostats, parking meters, etc., and points out that they may not be recognized as such because they don't resemble the hulking iron giants of science fiction movies and TV.  So far, so good.  But check out this closing passage: 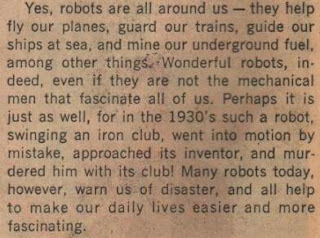 Update: Do I have the best readers and commenters ever?  Richard Bensam  points out this article in Slate on the way the story evolved (a misfired gun which wounded nobody becomes "his robot shot him"), and David Kilmer contributes this page from an Ogden, Utah newspaper which shows how sensationalized the story became.  I particularly love the photo of Alpha with the dancing girls.  Of course, the iron club and the "fact" that the inventor was killed are more recent additions to the myth.

Diane points to a story by the Binder brothers (Otto and Earl) which also has a similar plot:


Soon afterwards, a heavy object falls on Dr. Link by accident and kills him. His housekeeper instantly assumes that the robot has murdered Dr. Link, and calls in armed men to hunt it down and destroy it.

I wonder if the writer of that text piece was misremembering this incident, the details garbled after 31 years of obscurity:

It sounds something like the plot of "I, Robot" - not the Asimov collection but a story by Eando Binder between 1939 and 1942. IIRC, the "Otto" part of Eando wrote for DC in the early '60's.

Anyway - I wonder if the writer was conflating the story from Mr. Bensam's link and this one.

Scribd has a copy of a newspaper article with the original story from 1932: