In current comics, of course.

Clark Kent quits the Daily Planet in Superman #13 — and he doesn’t go quietly. He resigns in front of the whole staff, reports Brian Truitt, “and rails on how journalism has given way to entertainment.” (The Daily Planet is now part of the multimedia corporation Galaxy Broadcasting.)

Well, jeez, Clark, if you were concerned about journalism, you shouldn't have given your consent to some of Perry White's hair-brained circulation gimmicks.

Note as well that the story on Clark Kent both at Romenesko and USA Today indicate that the takeover of the Daily Planet by Galaxy Broadcasting is some new plot development.

The Daily Planet has also been moving more toward the real world, too, with the newspaper becoming part of the multimedia corporation Galaxy Broadcasting.

Actually Galaxy Broadcasting has owned the Planet since the first issue of Superman (#233) under Julius Schwartz's editorship, way back in January 1971: 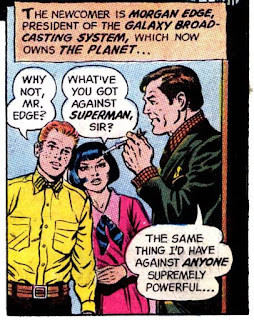 So long ago that not only did he smoke a cigarette inside an office building, but he smoked it from a cigarette holder! Which, by the way, strikes me as nearly as big a clue that he's a villain as if he were wearing a monocle.

You're not the only one to reference the original acquisition of the Planet by Galaxy. I wrote a piece at The Land of Whatever yesterday on the same subject. Apparently, DC's press hacks didn't bother doing their research or they don't care or want to.

Of course, when this happened back in the Seventies, that wasn't the real Morgan Edge. He'd been replaced by an Evil Factory clone thanks to Darkseid.

But the real Edge still used a cigarette holder when he came back.
The "same old same old" aspect has been touched on by most people who actually know comics. I doubt this will last as long as his TV work did--TV news early 1970s had more of a standing than I think blogging does today (maybe a few years ago, when everyone was ooooh, blogging!).-Fraser