This post was suggested by an emailer named Darell.

I have talked previously about the terrific Gold Key series, Magnus, Robot Fighter.  In the back of each of the Magnus comics was a four-page serial called The Aliens.  The series started with the contact with Earthmen: 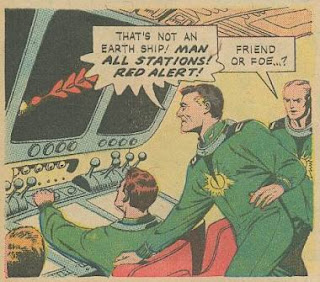 After an initial mistaken impression that the aliens were firing at them, they decide to head for home.  But then they realize that they can't do that without risking that the aliens will follow and discover Earth.  The aliens grasp the problem as well: 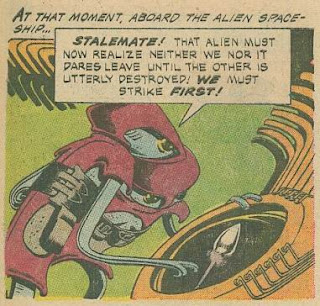 This is the basic plot of one of the most famous science fiction stories of all time, First Contact, by Murray Leinster.  The dilemma was resolved by having the two species swap ships after wiping out all information that could identify their home planets.  However, that wouldn't make for much of a serial, so in The Aliens, the solution is:

This creates two parallel stories, with one following the captain of the Earth ship (Johnner) and his half-alien, half-human crew heading back to Earth, while the other ship returns to the alien's homeworld.

Over the next several issues, we see the aliens and the Earthmen developing a bond and trust for each other as they help the other species out of difficulties: 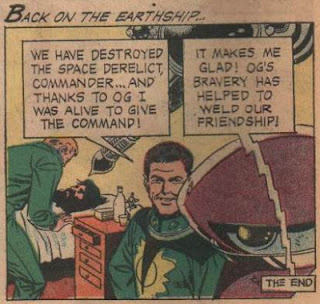 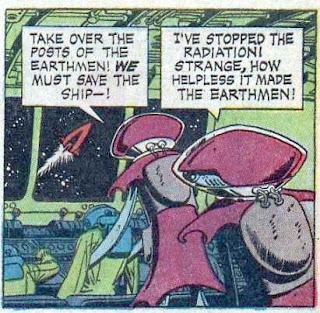 While this provides good characterization, it does have one drawback: there is not much conflict.  Oh, sure, there's the obligatory story where one of the Earthmen has an irrational prejudice towards the aliens, that is unsurprisingly resolved when an alien saves his life.  So it seemed to me that the serial started to bog down a bit, until they arrive back at Earth, where the aliens are surprised to discover: 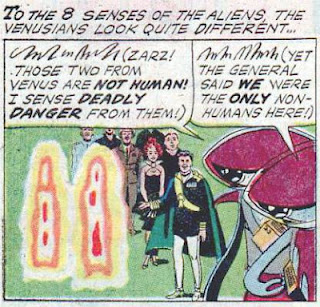 The colonists from Venus had been taken over by another alien intelligence and were infiltrating the Earth.  This provides the conflict the series needed: 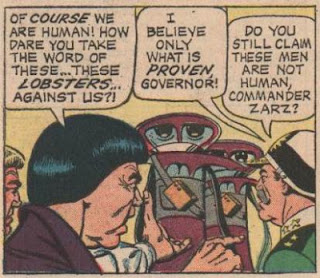 Note the slur.  There's something else being talked about here, under the surface.  Over the next several issues, the Earthmen and the aliens battle the Venusians and attempt to discover their plans.  The scripting and artwork on the series was done by Russ Manning, who was also doing the same chores on the Magnus feature.  Check out this gorgeous page: 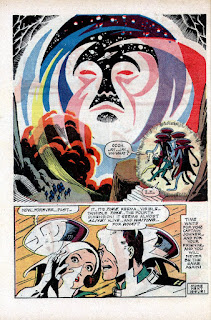 Overall the series is entertaining and well worth reading.  It has been reprinted several times, most recently by Acclaim as Captain Johner and the Aliens.
Posted by Pat at 12:06 PM

I just love that row of pull-levers on the main control panel. You saw that a lot in futuristic technology displays, but it seems like such a terribly primitive way to initiate a function or command. What, no rotary dial or needle gauges? :)

As Pat suggests, there's more going on than meets the eye in Russ Mannings's series. It doesn't appear in the first few issues, but before long "Magnus" shows a pretty well integrated future society, with women and non-whites in positions of power, and folks of different races living side-by-side apparently without a thought. This was unusual for the time, when the civil rights movement was still being opposed with violence. It's striking that Gold Key, primarily a "kid" publisher was taking the lead. Even the Bandar near the Phantom's Skill Cave, while living traditionally, at least spoke clearly and grammatically... not the default in those days.

So do you have a link to your previous Magnus post? It's a series I only knew growing up from reprints in English comics.-Fraser