Number of stories: 36, with three each in the Batman issues and one per issue of Detective.

Significant stories: Detective #226 contains When Batman Was Robin the first story to attempt to tell of the days between the time Batman's parents were killed and when he actually became the Batman. As a teenager, Bruce Wayne idolized Detective Harvey Harris. There's a bit of a flub in that Bruce says "My parents were abroad that summer...." However Bruce is portrayed as a young man of maybe 17 years old, and in all of the versions of the origin I can remember, Bruce is a lad of 8-10 when his parents are killed.

Bruce hires Harris to teach him detective skills. However, concerned that the detective may try to warn him off his intended career, Bruce decides to protect his identity by wearing a Robin costume. Harris indeed teaches Bruce a great deal.

This story continues a trend that had started in Detective #205, of the stories beginning to fill in a little of the past, to focus on Batman's history, a trend that would continue in 1956. In Batman #94's The Sign of the Bat Batman's origin is told in an abbreviated form that includes the bat flying in the window.

Detective #218 contains Robin Senior and Batman Junior, arguably the first of the weird transformation tales that would plague the series in years to come. Robin is hit with an aging gas, while Batman suffers the effects of a youth gas. Effectively the two change roles with Robin the sensible and mature crimefighter while Batman is impulsive and mistake-prone.

Best Story: Without a doubt, The Mystery of the Second Batman and Robin Team from Detective #220. Roger Bacon, the preeminent scientist of 1255 has found ancient scrolls which reveal that Batman and Robin had visited ancient Greece and Rome. Reasoning that these unusually garbed men must be from the future, he decides that time travel must be possible, and has invented a means to do so. He sends into the future two of his brightest pupils. On the assumption that in 1955 all men must dress as Batman and Robin do, he clothes them as the Dynamic Duo.

Well, of course this duplicate Batman and Robin manage to cause some incredible mix-ups in Gotham City of 1955. But what really sets this story apart is the "Great Question" which Bacon has sent his students forward in time to learn the answer to. In classic comic fashion the Great Question is referred to several times in the narrative. 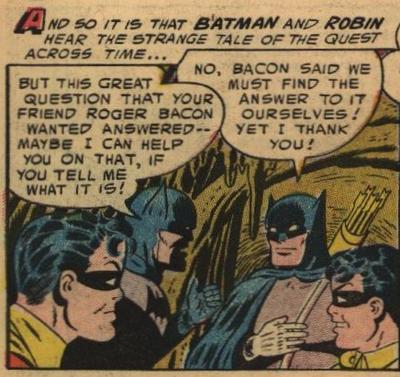 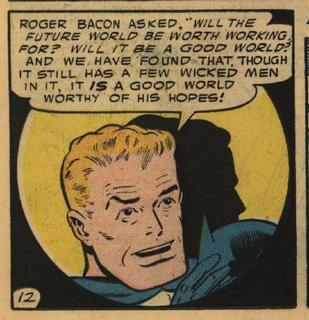 Multiple Batmen and Robins seemed to be the order of the day. In addition to the two stories noted above, Detective #215 brought us The Batmen of All Nations, a kind of UN summit of men from around the globe who had been inspired by Batman to fight crime in their own countries. In Detective #216 the Batman of Tomorrow, Brane Taylor of the year 3054 made his second appearance. Bruce Wayne injures his arm, and to make sure that Vicki Vale doesn't see Batman favoring that arm, Brane takes his place. In Detective #222's The Great Batman Swindle, we learn that apparently Batman is secretly a rotating group of four men, who alternate, and/or retire when their injuries are too great or they die. Of course, it's all a con job to try to get wealthy men, supposedly invited to become one of the next Batmen, to part with some of their fortune for a "genuine Batmobile" and "Batplane" that the crooks never intend to deliver. Batman #94 featured Alfred the Butler as The New Batman. And Detective #224 saw yet another fake Batman--this time The Robot Batman.

Additions to the Batman Family: Ace, the Bat-hound makes his first appearance in Batman #92. A dog that was injured defending his master is found by Batman and Robin. They fashion a mask for him and he helps them find his master's kidnappers. At the end of the story, the dog is reunited with his master. Ace had a modest continuing role in Batman stories from then on until 1964 when he was jettisoned with almost all of the Batman family in the debut of the "New Look" Batman.

Oddities: Batman began to be treated by the public as something of a celebrity during this year. Batman's Publicity Agent, a Hollywood-style pitchman, appears in Batman #91, promoting Batman as the savior of Gotham. In Batman #92, the Caped Crusader is menaced by the Fan Mail of Danger, and in #96 he conducts tours of The Bat-Train, an exhibit of Batman-ology on wheels, which is of course modestly similar to Detective #223's The Batman Dime Museum. In Batman #96, a traveling troubador pens The Ballad of Batman.
Posted by Pat at 7:42 PM

World's Finest #84 (1956) showed teenager Bruce Wayne on a vacation with his parents, although most versions of his origin show him as "a lad of 8-10 when his parents are killed." This story was reprinted in WF #170/80-Page Giant #40 (1967). I think a later retcon may have explained that the couple were his aunt and uncle.