Significant Stories: Many. Detective #227 continues where #226 left off, showing us this time Barrett Kean, the master makeup artist who taught Batman his amazing disguise tricks. Detective #235 presents The First Batman, a story in which Thomas Wayne dons a Batman uniform to fight crime decades before his son. It contains a brief retelling of Batman's origin, complete with the bat flying through the window.

But the most significant story has to be The Batwoman, from Detective #233. Kathy Kane (name chosen in homage to Bob Kane) became a major character in the DC universe for the next eight years. A former circus performer, she had inherited a large fortune from an uncle and decided to dedicate herself to crime-fighting alongside Batman. Unfortunately she was a little over confident and in the end, Batman succeeds in unmasking her. She agrees that if he could do it, so could the underworld, and thus she'd never be safe. At the end of the story she retires (but not for long).

The 1955 trend of having other Batmen appear continues. Barrett Dean poses as Batman in Detective #227 and Thomas Wayne is The First Batman in #235. Detective #232 brings us The Outlaw Who Played Batman. Robin gets the multiple treatment in "Batman Junior" from Detective #231, and Detective #237's The Search for a New Robin.

In Batman #99, the Penguin makes his only appearance between 1954 and 1963. In fact, I believe that the Joker (who appeared often) was the only pre-code villain to make appearances in new Batman stories during those years.

Other Trends: Batman continues to make use of the latest technology. In Detective #229's 10,000 Secrets of Batman, we see a good example of what I like to call "Pocket-Protector Batman": 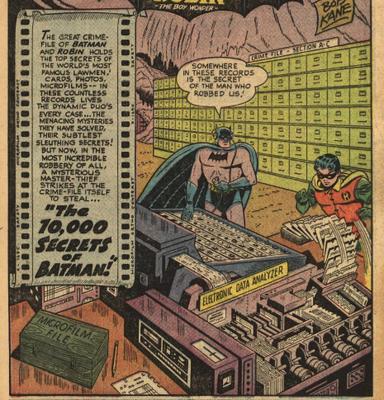 The machine shown is a card sorter; together with the cards it makes a relational database. In the story they use it quite a bit: 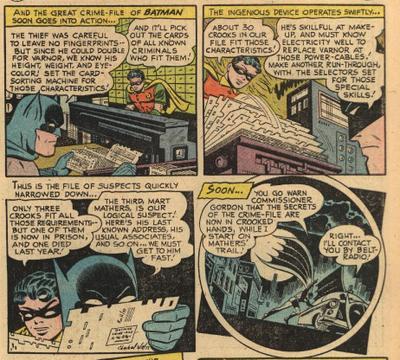 Artwork by the inimitable Dick Sprang, IMHO the greatest Batman artist ever. This is a significant early example of computers in comic books.

Other great stories: Batman #98 has The Return of Mr Future. Jules Verne journeys with Batman into the future to save the world from his most dangerous invention. That same issue features Desert Island Batman, a classic of the "tontine" Batman stories. A tontine is an pooled investment where the last living member inherits the shares of the others; who will be the last one left? There are many examples of this type of story but this one is particularly ingenious, in that five millionaires (including Bruce Wayne) are shipwrecked on an island by crooks who demand a ransom of a million dollars apiece. Batman goes into action, revealing that he is one of the five men, and the balance of the story concerns the (logical) elimination of each man as a potential Batman, until only Bruce Wayne is left. Batman #101 includes a terrific story, The Great Bat-Cape Hunt Batman loses his cape, which contains the secret of his real identity. It is subsequently found by several people who go on to perform daring feats, inspired by the cowl. This is a plot swipe from the all-time classicThe Secret of Batman's Utility Belt, which appeared in Detective #185.

Batman's celebrity continues from 1955, with Batmantown, USA, in Batman #100. The small town of Plainville decides to spice up the local tourism trade by renaming itself after the caped crusader. In The House of Batman, from Batman #102, a mystery benefactor creates a downtown base for the Dynamic Duo, which ends up being converted into yet another Batman museum. Bathound gets a bit of the red-carpet treatment in Bathound, Movie Star from Batman #103. Batman #104 includes Robin's 50 Batman Partners which includes The Batman Exposition, a special fair dedicated to the Dark Knight. And in The Outlaw Who Played Batman from Detective #232, Batman appears in a major motion picture. Intriguingly, it's played like a modern reality show, with Batman supervising the choice of actors to portray him.
Posted by Pat at 7:48 PM