(This has been Crossposted to Brainster's Blog, in a condensed version). 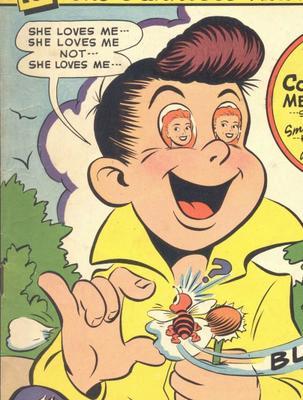 He lives in a typical small town in America with Mom and Pop. Mom's pretty much the sole sane person in the comic. Dad, on the other hand, falls for every get rich quick scheme that comes down the pike. 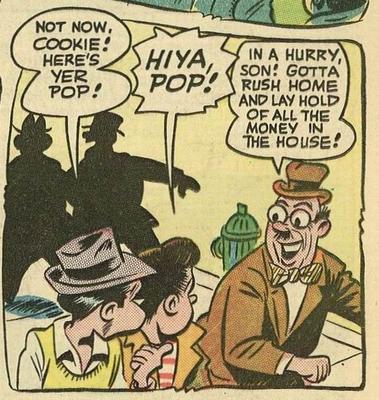 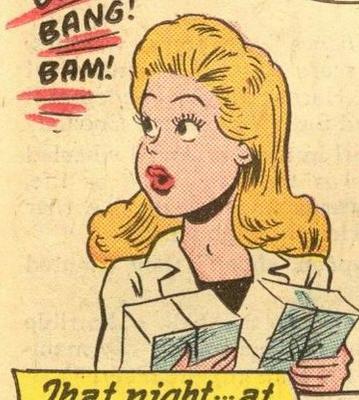 Every story needs a villain. In the Cookie stories, it's usually this fellow: 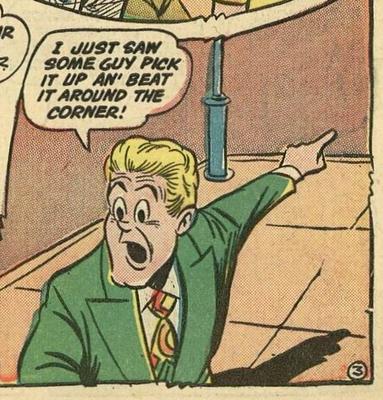 Zoot is a sneaky ne'er do well compared to the good-hearted Cookie, although much the nattier dresser and clearly from a wealthier background.

Fortunately Cookie is aided by his best pal, Jitterbuck Jones. Jitterbuck is prone to coming up with great ideas, which frequently involve Cookie in drag. 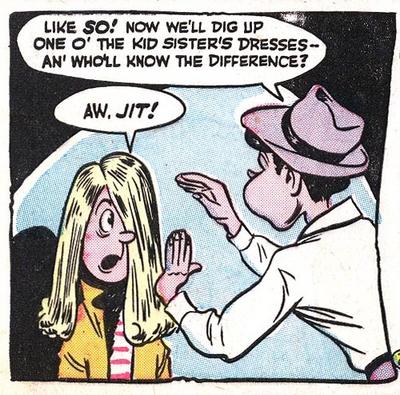 The main thing I like about Cookie is the mayhem. Cookie stories all feature people doing absolutely crazy things. As one of my friends commented, it's amazing this comic didn't catch the eye of 1950s anti-comic crusader Fredric Werthmam, because it seems to be a rare issue that doesn't have cross-dressing, adult babies and mannequin fetishes; all in a perfectly harmless G-rated setting. 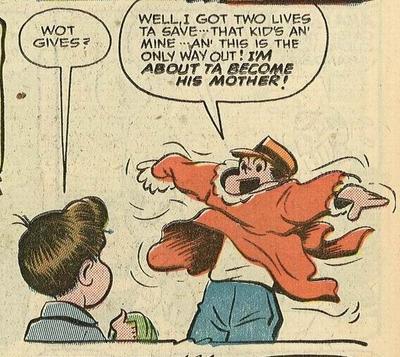 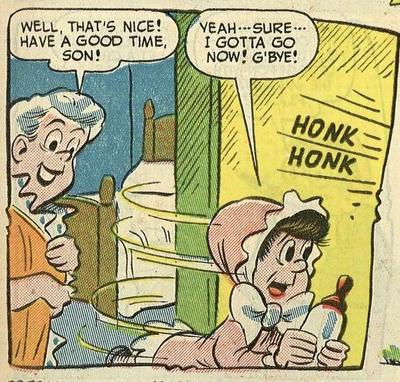 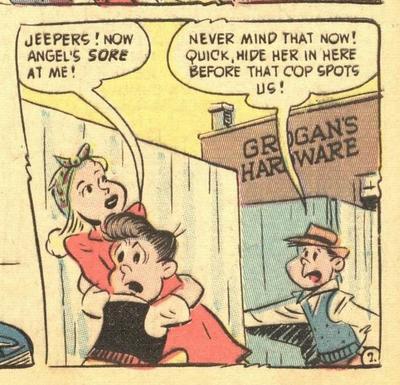 Cookie first appeared in Topsy-Turvy Comics #1, in April 1945. He next popped up a year later (an eternity in comics time) in his own book. There were 55 issues published of Cookie, with the series finally coming to an end in August of 1955.

One of the charms of Cookie, much like the Simpsons, is the clever use of the (fairly large) cast. At Harelip High, where the younger members are enrolled, there's his teacher, Miss Bibblesnicker, and Principal Lockjaw. Cookie's scientifically-inclined friend is the Brain, although his inventions tend to be a little unpredictable.

Cookie's chubby buddy is Hep, who seems to take a particular enjoyment in beating up Zoot at appropriate moments. To add more dynamics to the situation, Angelpuss's father (Mr Witherspoon of the Witherspoon Tool Company) is Cookie's pop's employer, and Mom does have some social aspirations for the family at times.

A typical Cookie story might start out with our hero in search of money for the dance. Where it goes from there is anybody's guess. When Cookie does get a job, it usually turns out to be something frustrating and demeaning, from which he is inevitably fired. Then Jit comes up with a hare-brained scheme, which goes off track due to nefarious activities of Zoot, and results in Cookie's dad losing his job as well. Then somehow Cookie comes through in the end as a hero, and Mr Witherspoon always hires Dad back. Although it sounds formulaic, it's really well-done with always a genuine affection for the characters (except for the odious Zoot).
Posted by Pat at 11:11 PM