Significant Stories: In Detective #244, we are introduced to the man who gave Batman his first Batarang and taught him how to throw it. Lee Collins was an Australian with a sideshow act throwing boomerangs. This makes the third story in as many years about the people who trained Batman in the skills he uses.

Detective #243 continues the weird transformation trend that started with #218, this time featuring The Giant Batman. Robin changes into a man again briefly in Batman #107's The Grown-Up Boy Wonder. It was still only a trickle at the time, but that was about to change.

Another trend that would prove irresistible to Batman writers began with a vengeance in Detective #250: Aliens. Batman had occasionally bumped into extraterrestials (e.g., The Manhunter from Mars, a J'onn J'onzz prototype, in Batman #78), but he was about to be inundated with them.

Batwoman returns in Batman #105. Kathy Kane had worn her old costume to a masquerade ball, but ended up helping Robin. Batman has apparently suffered amnesia, so she comes out of retirement to help the Boy Wonder. She retires again after this story, but in World's Finest #90's The Super Batwoman, Batman relents and decides to allow her to fight crime. She returns for the third time that year in Detective #249, The Execution of Bruce Wayne.

In The Secret of Batman's Butler, from Batman an early attempt at retconning is made. Alfred simply applied for the job of butler to Wayne Manor; there was no discussion about his father having worked for Thomas Wayne. In addition, he learns about Bruce's double life when Batman is injured and Robin calls him down to the Batcave. This is all wildly inconsisted with the original Alfred story in Batman #16, and most subsequent retellings (the most recent ones have him working for the Waynes before the murders). 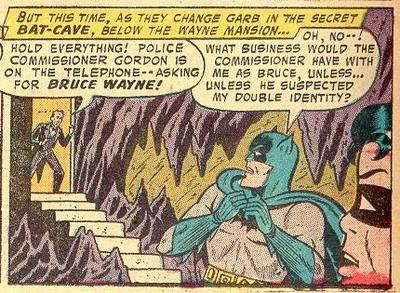 Of course, the very first Batman story of all time begins with this stage setting:

The home of Commissioner Gordon, who at the moment is entertaining his young, socialite friend, Bruce Wayne.

In many stories Bruce and Commissioner Gordon were shown as friends. In Batman #71, Commissioner Gordon's Greatest Case, Gordon invites his inner circle of friends to dinner in the suspicion that one of them is Batman; among the guests are Bruce Wayne and Dick Grayson.

That same story, though, does apparently contribute the idea that Bruce Wayne was named after his father's cousin, Bruce N. Wayne, a detective "from out on the coast." The story is played somewhat as farce, as Bruce N. Wayne tries to make a real man (i.e., a detective) out of Bruce.

Another Batman of the future appears in Batman #105, "The Mysterious Bat-Missile", although this one goes unnamed. And a famous Batman foe from the past returns as a helper this time: Dr Thorne, who was known as the Crime Surgeon when he appeared in Batman #18 and Detective #77 (in which latter issue he died), pops up suddenly in Batman #106's Batman's Secret Helper as the surgeon who saved Batman's life, with no mention of his prior criminal career. Dr. Thorne would also appear in the late 1970s and again in the 1980s.

The celebrity angle continues to be played up. In Detective #244, The 100 Batarangs of Batman, thieves steal films from a Batman collector. In Batman #107, a contestant on The Big Batman Quiz goes for $125,000. In that same issue, The Career of Batman Jones tells the adventures of a crimebusting youth named after Batman. This story was foreshadowed in The Fan Mail of Danger from Batman #92, when a temporary secretary hired by Batman informs him of his namesake.

Best Stories: Detective #247 features The Man Who Ended Batman's Career. Professor Milo has come up with a way to make Batman afraid of bats, which means he can't use his equipment, such as the Batplane, Batmobile and Batarangs. He switches his double identity to become Starman, but of course that's not going to fool the Professor for long, so Robin decides to take desperate measures: 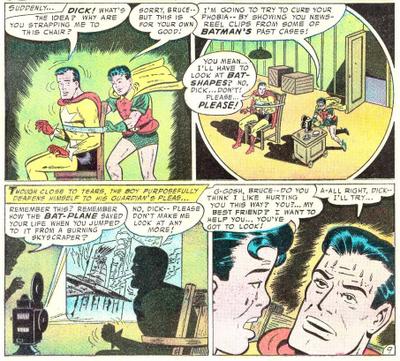 That's just a superb sequence displaying the loyalty and devotion Batman and Robin have for each other. Professor Milo would reappear a few years later and again in a classic Denny O'Neill/Neal Adams early 1970s' thriller.

Detective #248 features the terrific Around the World in 8 Days Batman must find a stolen serum in order to save a man's life. This is the third to last Dick Sprang story in Detective, and he's in fine form here with exotic locales and thrilling fight scenes.
Posted by Pat at 4:53 PM