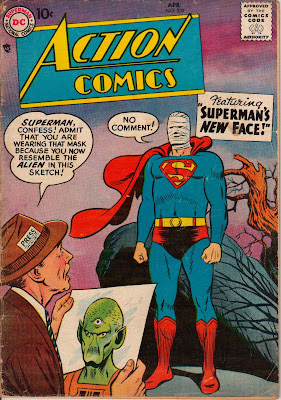 This is one of those goofy covers that you have to laugh at. "No comment?" That's what Mafia members were saying to reporters around this time.

What happens in the story is that a scientist is experimenting with transmutation, changing one element into another. One of the elements he's experimenting with is Kryptonite. When Superman sees the machine is about to explode he carries it into space, where the blast can't hurt anybody. Unfortunately because of the Kryptonite it scars him in some way (we can't see how until later in the story). He starts wearing bandages and later an iron mask to cover his face. This encourages crazy speculation: 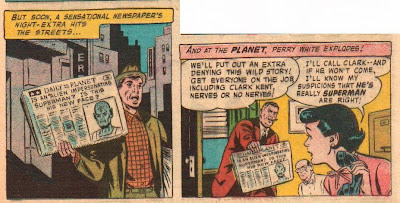 Somehow Perry fails to notice that this wild story comes from his own paper. Of course it's pretty obvious that somebody forgot to tell Wayne Boring to label the newspaper with one of the Planet's competitors. Meanwhile Lois is getting suspicious because Clark hasn't shown up at the office. When he does arrive, though, he only has a small bandaid in the middle of his forehead. Surely this can't be the scarring that caused Superman to hide his face?

But it is. You see, earlier in the story Perry White had given his reporters new press cards: 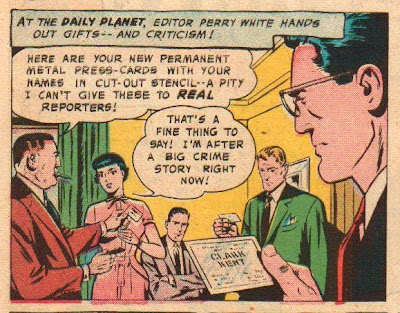 And the explosion had pitted Superman's face with the words "Clark Kent". He tries various methods to get rid of the words, including diving into lava and letting himself be hit by a lightning bolt, but neither worked. Finally he creates an atomic explosion and that does the trick.

The Congo Bill story is rather interesting, since it concerns an attempt by the US to launch a satellite into space (from Africa). This appears to have been inspired by the launching of Sputnik, in October 1957 (this is the April, 1958 issue of Action). Congo Bill and Janu, the Jungle boy, are pressed into labor building a pyramid, but it turns out that the point of the pyramid is just to point the way to the launch site, which had been concealed with netting. Fortunately Congo Bill spoils the plot.

The Tommy Tomorrow story concerns a time capsule from 1958 (TT's stories were set 100 years in the future, in 2058) that contains toys from that era. Tommy decides to use them to defeat some space pirates. There's a mention of Sputnik here: