Random Cover of the Day: Showcase #20 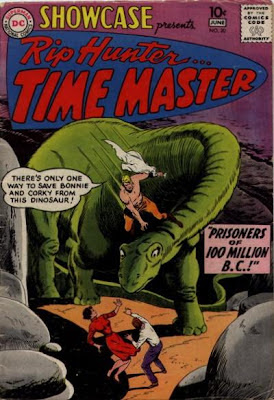 Not too hard to guess who the editor was for this issue; if there's a monster, a dinosaur or an alien on the cover, odds are it's a Jack Schiff comic. Yep.

Another hungry brontosaurus who hasn't been told he doesn't exist and is a vegetarian anyway. It's pretty obvious what the "one way to save Corky and Bonnie" is; given that Rip has torn his shirt off, I'd guess that he's going to blindfold the dinosaur.

Rip Hunter was a reasonably successful title for DC; although it took him four tryouts to land his own mag, he lasted 29 issues or almost five years. This is his first appearance. He used one of DC's classic time traveling bubbles, and frequently encountered famous figures from the past including Adolf Hitler, Cleopatra, Helen of Troy and George Washington.
Posted by Pat at 5:29 PM