DC Annuals in the Silver Age 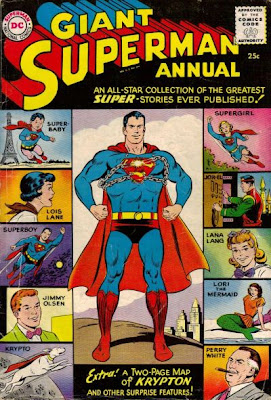 These comics had a story and a magic all to themselves and so I thought I'd put together a series of posts on them.

Giant comics were not unheard of in the DC Golden Age. DC's regular comics started out at 68 pages, then dropped briefly to 60 and then 52 pages. Big All-American Comics came out in 1944, with an incredible 132 pages. But it, like the World's Fair Comics and World's Finest and Comics Cavalcade issues always featured new stories, not reprints.

So Superman Annual #1 was a landmark in the Silver Age as it was the first time I know of that DC actually reprinted a story in its entirety. Why is this such a key moment? Because after that comics really had to start caring about continuity. In the old days if a current story contradicted a five year old one, it was a couple letters to the editor. But if that original story got reprinted, it became part of the newly forming canon of the character.

Superman Annual #2 followed only a half year later, making obvious the lie of the title. The reprint giants of the 1960s tended to be printed in early summer and early November, which made them perfect for long drives in the car during the former and stocking stuffers or Thanksgiving presents from Grandma and Grandpa.

The next new giant was truly historic: 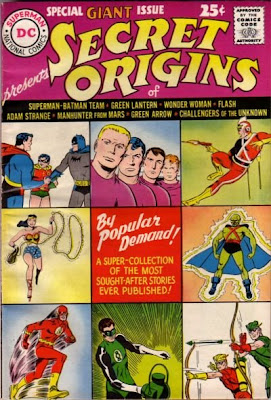 That's the history of the DC Silver Age right there on the cover. It's edited by Julius Schwartz. The earliest story in the issue is the Martian Manhunter origin, and aside from Aquaman, all early Justice League characters are represented.

So what did DC lead off with in the summer of 1962? Well, if you've been looking at the circulation numbers around then, it will come as no particular surprise: 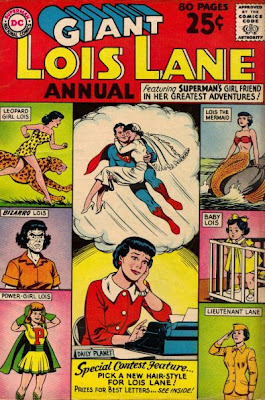 Lois Lane was moving about 4 million copies a year. 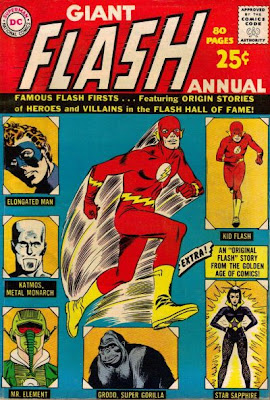 Now up to that point although DC had pretended to be opening up their vault, this issue's Star Sapphire story was the first actual 1940s story to be reprinted. It was an obvious nod to the Golden Age fans. Publishing the Flash Annual was something of a surprise, but the other candidates were Superboy and Jimmy Olsen, both of which would just have added to Weisinger's workload.

The Winter Annuals were again Superman and Batman (#8 and #6 respectively). The next year DC led with Superboy Annual #1, then Batman Annual #7.

And then the numbering of DC's Giants gets complicated. The post office apparently wanted to charge them more for all these new "Annual" titles, so DC got the brilliant idea of calling them "80-Page Giant #1, #2, etc." Brilliant from a screw the post office standpoint, but holy hell on anybody trying to figure out which issues he was missing in the early 1970s. 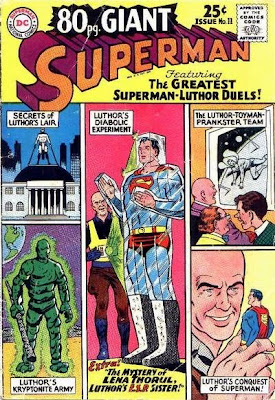 After that came Batman, Jimmy Olsen, and Lois Lane. The final issue (#15) of 80-Page Giant was World's Finest. Here DC hit on another great idea. By seeding in the annuals with the regular series they could eliminate another title and pay the post office even less money. So 80-Page Giant #16 was also Justice League of America #39, bringing the JLA into the rotation. #20 was also Action Comics #334 and featured Supergirl.

And that was basically it. DC had found a rotation of Annuals where they could issue one per month and they didn't really alter it much after that, perhaps thinking that the market couldn't handle more than one 25 cent comic at a time. They did squeeze in an extra Batman Annual during 1966 to take advantage of Batmania, and Adventure Comics picked up the Supergirl Annuals after she moved over from Action, but aside from that there were no additions and no subtractions to the DC annuals after 1965.
Posted by Pat at 6:10 AM