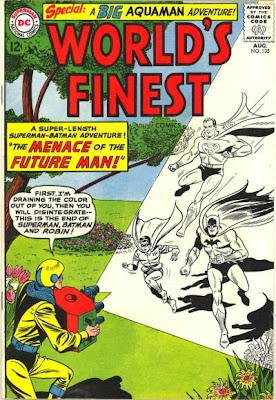 World's Finest #135 features the last appearance during the Silver Age of a new Dick Sprang story. There is some indication that this story may have been inventoried for awhile; if you look at the number of stories Sprang had published by year in the late 1950s/early 1960s, it sure looks like it:

The irony is amusing. Early in his career, Sprang's work had reportedly been inventoried by DC as a hedge against the potential that DC's regular Batman artists, including Bob Kane and Jerry Robinson, might be drafted into the military for World War II. Now late in his (comics) career it was released in dribbles, apparently to keep the hope alive that he was still working for DC.

The story opens with Batman and Robin investigating a report of a strange-looking man digging in a farmer's field. They arrive as he excavates a small chunk of Green Kryptonite. When they confront him, he shoots them with a repulsing weapon and escapes on a flying platform.

Batman chases after him in his Whirly-Bat, instructing Robin to contact Superman. 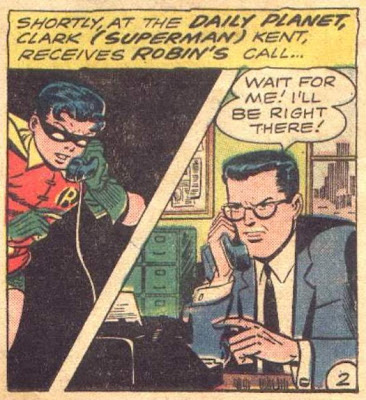 Interesting; I had always known that Batman and Superman knew each other's identities, but not that Robin knew about Clark Kent.

Batman follows the Future Man's trail back to a cave where he discovers a time machine with a then-current date (June 8, 1963) and a notebook which mentions New Gotham City in 2084 and ancient Norseland in 522. Robin relays the message that Superman and he have found the Future Man at the local "Boy Ranger Museum". He has created Kryptonite bullets with which to stop the Man of Steel. Seeing Batman approaching on his Whirly-Bat, he forces the Caped Crusader to execute a daring maneuver: 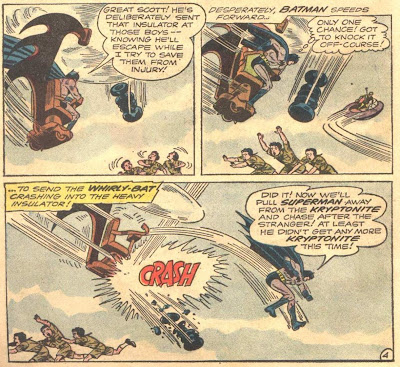 Is this the finest moment ever in Whirly-Bat history? I'll leave that one to the experts, but it's surely high on the list.

The Future Man escapes and when Superman, Batman and Robin chase him to the cave, they discover the time machine vanishing. Has he gone into the future, or into the past? Superman will cover the former, while Batman and Robin go back to Norseland.

This of course means another appearance for Dr. Carter Nichols, a longtime Batman family member who was about to disappear as well. I don't think this was his final appearance but the clock was definitely ticking. He sends Batman and Robin back through time. Unfortunately, the Future Man has gotten there first and convinces the villagers that Batman and Robin are here to assassinate the local chieftain.

They are knocked unconscious and transported to learn their fate from the chieftain who turns out to be a surprise: 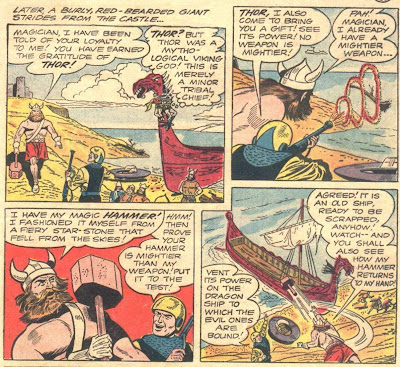 This is one of several "Thor" appearances in DC comics, and I would guess one of the last. It turns out that the Future Man's objective was to steal Thor's hammer, which he does and vanishes back to the present, with Batman and Robin in pursuit.

Meanwhile, Superman has gone into the future, where he initially faces charges for imitating the great hero of the past, but he quickly proves he's indeed the Man of Steel: 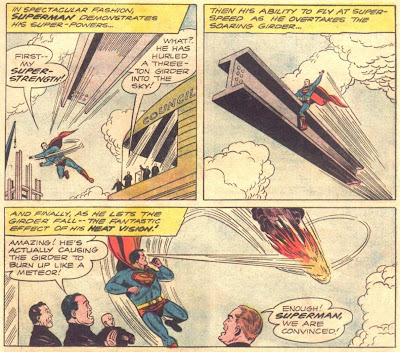 He recognizes the Science Minister as the Future Man, but later discovers it's actually his twin brother. The Future Man's minions capture Superman with the Kryptonite and tie it to him with ropes. We learn that the Hammer of Thor interacts with Kryptonite to cause amazing effects, hence the cover image, which scene appears next in the story.

We shift to the future, where the Future Man's henchmen greet his arrival from the present. Rak disintegrates the Kryptonite holding Superman down, apparently in preparation for destroying the Man of Steel himself. But it's a ruse, as Batman and Robin have defeated Rak already (using robots for the cover sequence), and with Superman free they quickly make short work of Rak's henchmen.

If we look at this story for keys as to when it could have been created, it immediately becomes obvious that it is after Detective #257 (July 1958) as this story features extensive use of the Whirly-Bats, which first appeared in that issue. There are plenty of other clues, however.

Superman is show as using his heat vision, not the heat of his x-ray vision. I am not sure of the exact date and issue that switchover was made, but I'm pretty sure it was around 1960.

The Thor appearance is a surprise. Marvel's Thor made his first appearance in August 1962 and he appeared on every cover of Journey into Mystery thereafter. That strikes me as a strong indication that this story must have been written before that. DC did have another Batman/Thor story before that in Batman #127 (1959), but with the heat vision aspect we're already after that.

I don't buy the date shown in the time machine of June 8, 1963. That's about when the comic went on sale (actually June 13, according to the DC Indexes).

There is one more aspect of the story that I have to comment on, and that is the tributes. This does certainly seem to be a swan song for Sprang, and Alfred/Rex and Commissioner Gordon are shoehorned into the story via a silly subplot about Batman's secret identity: 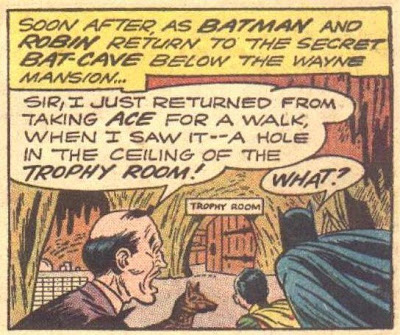 Alfred gets a line, the commissioner just gets to hold his head:

I tend to think that's intentional; if the Future Man really had Bruce's secret identity (and he did), then why would he contact Batman at police headquarters? Why not send him a message at Wayne Manor? The only answer is to give Sprang a chance to draw Gordon one last time. Bill Finger is credited with the script; did he know this was Sprang's last issue?

Comments: Nice story, excellent art as usual (but never again in the Silver Age) by Sprang.

There is a text story; World's Finest was one of the last superhero titles at DC to get a letters column. This one starts talking about frogmen of history, then switches to a discussion of the aquatic spider, then segues into modern skin (scuba) diving.

The second story is The Creatures that Conquered Aquaman. This one requires a small amount of intro. Jack Schiff had inherited the Aquaman strip from Adventure Comics. Initially he put Aquaman into Detective comics, but that only lasted for seven issues before he shipped it over to World's Finest. Initially both Aquaman and Green Arrow shared duties as backup features but effective with #134 they began alternating issues with slightly longer stories. This only lasted until #140; with the next issue Weisinger took over editorship of the mag and put a reprint story in the backup role. I have previously expressed bafflement at these decisions, especially since Aquaman had already gotten his own magazine by then. But in retrospect it seems obvious that although Aquaman had landed a new home, there was no room for the old Aquaman creative team of Jack Miller and Ramona Fradon over there.

This story is a rather pedestrian "Aliens from another dimension come to loot ours." They have these headbands that give them super-powers (mostly beams from their hands and eyes). Aquaman's finny friends help him out:

Comments: A mediocre story that feels padded even though it's only ten pages long. I've always like Fradon's art.