It is no secret that the comics of the Silver Age ignored lots of human beings in the real world. The characters were almost always Caucasians and invariably perfect specimens of humanity. It was a Lake Woebegone world, where all the children were above average. Oh, there were a few times that "different" people slipped in, but it was mostly in the public service announcements. 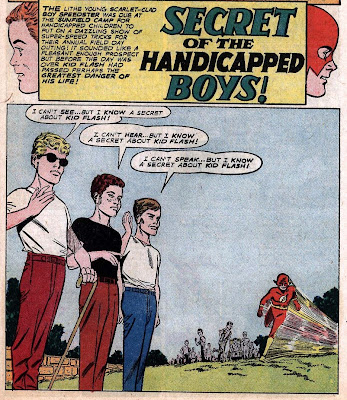 (Note: Yes, there is a huge, glaring error in there, which I'll note at the end of the post.)

Kid Flash is supposed to appear at a camp for handicapped kids, who have dreamed up various tests of his abilities. Some of them seem a little odd, such as this one: 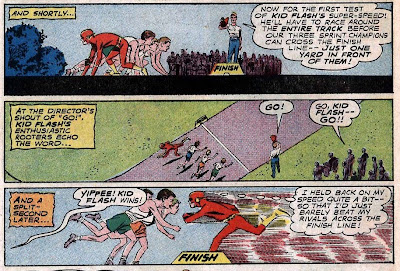 Maybe the kids were inspired by the race because they sensed that Kid Flash could have beaten them even if they were world-class athletes? And it turns out that the inspiration is going both ways: 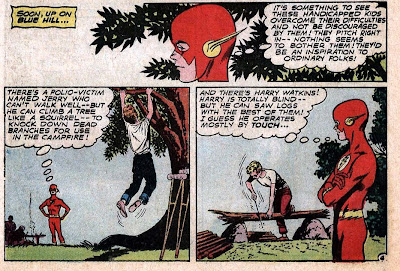 Excuse me for a sec, I seem to have gotten something in my eye. But it gets even better, as it turns out that three of the boys have independently figured out that Kid Flash is actually Wally West (whom they all know from living in Blue Valley, his home town). 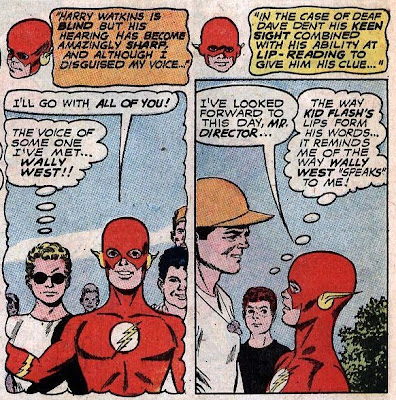 What will happen now? It was an almost ironclad law at DC that nobody could know any superhero's secret identity. In fact, if somebody discovered it, there were three different possible endings to the story:

1. They die
2. They get amnesia
3. They become convinced that they were wrong

Well, this time there was a fourth option:

Wow. Terrific story by John Broome and kudos to Julius Schwartz for allowing an unconventional ending to a secret identity tale. And this response a few issues later must have been very gratifying:

Error: See the splash page for the story, with the third kid saying "I can't speak..."? Obviously that was supposed to be a thought balloon.