In the mid-1950s, TV viewers were riveted to their screens by the Quiz Shows of the time. However, in 1958 it was discovered that some of the shows (notably Twenty-One) were rigged, with the producers providing the contestants the answers and coaching them on how to make the show more dramatic. The story was immortalized in the 1994 film on the scandals, Quiz Show.

But in Batman #108 (June 1957), readers of Batman comics learned the truth before the rest of the public, in The Big Batman Quiz. In the story, contestant Frank Davis is about to go for the big money: 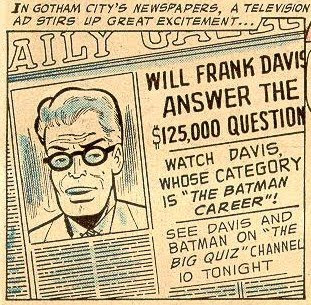 Batman is a special judge to determine whether the answers to the questions are right or wrong. Davis aces the $75,000 question: How did Batman apprehend the criminal Fenton brothers? Answer: By soaring into their mountain hideout on a kite. But the big question is a shocker: 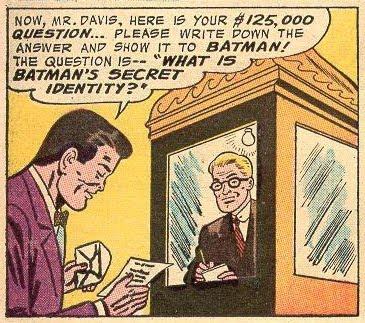 And even more startling, Davis has apparently deduced the answer, as he writes Bruce Wayne's name on a card and shows it only to Batman. However, before Davis can exit the isolation booth, he keels over and dies. And when they pull him out, the pad on which he wrote Batman's secret identity is blank; it appears that someone tore the top sheet off.

Suspicion immediately falls on Garth, a criminal who was scheduled to appear on another program on that network, and who escaped during the show: 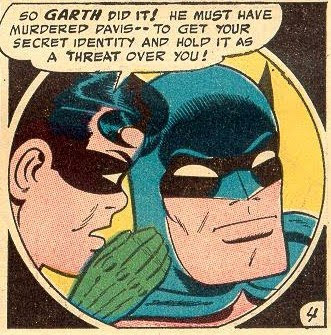 However, as they try to catch the thief, Batman realizes that "Garth" knows too much about the TV business for a common crook and they discover that the real crook has been bound and gagged in a prop room. The killer is obviously someone associated with television, and Batman quickly figures out who it is: 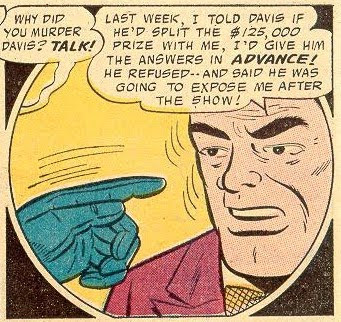 Harmon (the game show's host) had coated the light bulb in the isolation booth with a chemical that turned into a poisonous vapor when heated. Ironically, the vapor also erased the handwriting on the pad, thus saving Batman's real identity.

Based on the timeline of the real quiz show scandal, it appears that the writer had the basics right before the scam broke. The contestants were indeed furnished with the answers, but not in order to split the prizes. The story broke completely in 1958:

The gravy train derailed in August and September of 1958 when disgruntled former contestants went public with accusations that the results were rigged and the contestants coached. First, a standby contestant on Dotto produced a page from a winner's crib sheet. Then, the still bitter Herbert Stempel, Van Doren's former nemesis on Twenty One, told how he had taken a dive in their climatic encounter.

Wikipedia notes that some elements of the story had come out in 1957:

When Enright subsequently told him the promise couldn't be kept because he had sold his shows to NBC itself, Stempel went to the authorities to explain how the show was fixed and his own role in the rigging. As he later testified to Congress, he also agreed to talk to a reporter from the New York Post in February 1957, but the paper feared a libel suit if they went public with Stempel's original accusations at the time they spoke.

However, when we consider the timeframes for publishing comics, it seems unlikely that the scandal could have been public knowledge at the time the Batman story was written. According to the Master List for DC maintained at DC Indexes, Batman #108 hit the newsstands on April 16, 1957. Given the several months' delay between creation of a comic and its actual publication, it appears likely that the story must have been written prior to Stempel's talk with the New York Post. Note as well that the scandal did not become public at that time as the Post did not run with it.

The GCD does not have a credit for the script on this story. I have a vague memory that one of the famous comic book writers appeared on one of the quiz shows of the 1950s. Anybody? Bueller?

Update: Commenter Lee points to this appearance by Leo Dorfman, which is indeed the one I remembered:

Some very funny commentary by the host there.
Posted by Pat at 9:09 AM

The 60s Batman movie starring Adam West and Burt Ward is playing at midnight at the Prytania Theater in New Orleans tonight. If any readers can get there, I recommend it. I saw it last night. It's even better on the big screen than when I was a kid watching it as the movie of the week on afternoon TV.

Leo Dorfman appeared as a contestant on a 1950s quiz show, apparently called "The Truth or the Money" (?).

Here is a clip of his appearance on Youtube:

So this guy Davis actually knew that Bruce Wayne is Batman? Was that explained in the story? Had he followed Batnan's career so closely that he was able to connect the dots, or what? Silver Age stories often showed the lengths a super-hero would go to in order to preserve his secret identity, so it seems odd that Davis's knowledge would be treated as a secondary element in the plot. (At least that's the impression I get from your synopsis.)

In any case, it sounds like an interesting, slightly off-beat, Batman tale. Thanks for posting!

Jim, that's the impression the story leaves, that the guy was the ultimate authority on Batman's career and that somehow (unexplained) he'd worked out that Batman was really Bruce Wayne.

It really would not be that hard to deduce Batman's identity. In an episode of "The Batman" on WB or Cartoon Network, a computer called D.A.V.E. worked it out: able-bodied young adult, white male, lives in or near Gotham City, has the resources to acquire high-tech equipment (i.e., wealthy), and has a motivation for fighting crime.

The quiz show scandal of the 1950's may have influenced Jeopardy's format. IIRC, Merv Griffin decided to do a game show that would openly provide answers to the contestants, who would then have to come up with the right questions.