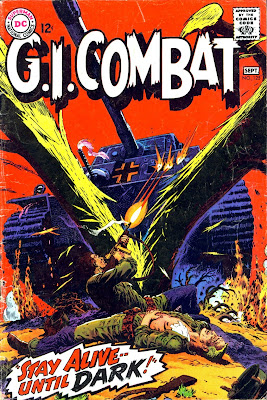 GI Combat was one of the titles that DC inherited from Quality Publications in the late 1950s. As with their other war titles, DC created a continuing feature for the book. In this case, it was the Haunted Tank. During World War II, the US forces used a tank known as the M3 Stuart, named after the Confederate General, J.E.B. Stuart. In this series, the Civil War cavalryman haunts the tank named after him and which is commanded by a Jeb Stuart Smith (later stories dropped the last name).

The series mostly had the ghost giving cryptic and apparently crazy advice to his namesake, which later would be revealed as prescient. Smith's men were a little disturbed by his habit of talking to a ghost, but generally reasoned that he seemed to be a fine commander despite his eccentricity.

Their assignment for this issue is fairly straight-forward: 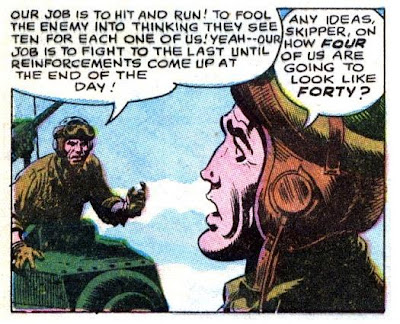 Intially, they fight a Messerschmidt that has been temporarily grounded, but is about to take off. They shoot it but: 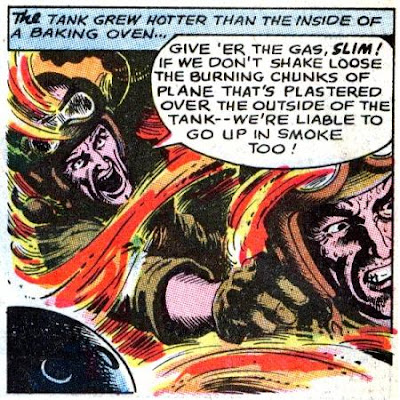 Later, they defeat two German tanks, but one of their fellow American tanks is destroyed. As they head into Crecy, the General gives Smith some encouragement: 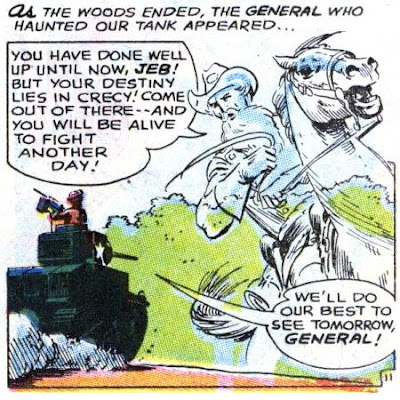 The fighting is fierce inside the town and the other two tanks for the American side are destroyed. But Smith and his men account for a few themselves: 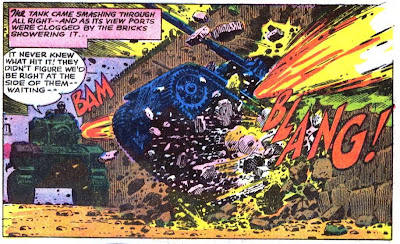 They even run into Sgt Rock of Easy Company briefly. In the end, they hold out till dark and: 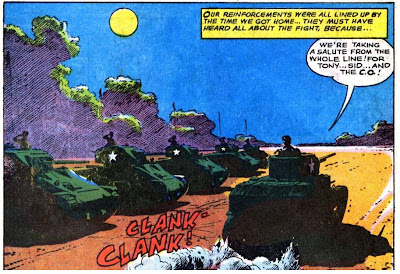 Comments: Entertaining story and gorgeous art by Russ Heath. I was particularly struck by the expressions on the faces of the men during the battle: 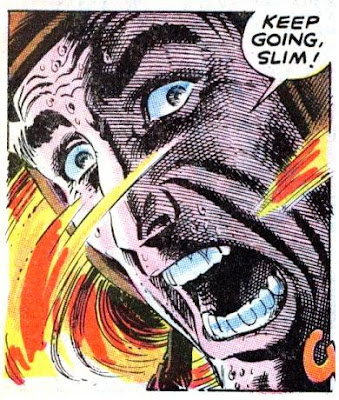 The backup story is about a submarine that is forced to fight on the surface due to problems. Eventually it is able to submerge, but even then things don't go perfectly: 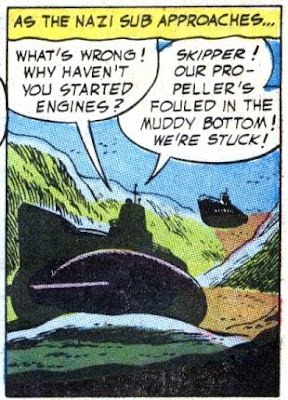 For the war-weary closeup, Heath was the man!

I have several Haunted Tank tales, as well as many more Sergeant Rock stories, along with a smattering of DC's other war product.

My preferences are rather eclectic on the matter of DC versus Marvel when it comes to their respective WWII output.

I prefer Sergeant Fury to Sergeant Rock. Granted, Rock took a harsher look at the realities of war. But at the same time, Robert Kanigher was less innovative---his tales always seemed to follow a rule of three. The initial premise would be established---a new recruit who didn't fit in, or an outside influence affecting the mission. Then there would be three recurrences of the situation, with the resolution arriving in the final instance.

It was formula---and formula is not always a bad thing---and if you read one Sergeant Rock story every couple of months, it wasn't too wearisome. But if you sit down and read a half-dozen or dozen of them in a row, then the formula becomes striking . . . and repetitive.

The only DC war series I really enjoyed was the Losers; I have the entire run of those. But it was before Jack Kirby got his hands on it and ruined it. The real salad days of the Losers was when John Severin had the art chores. Yeah, you had the formula of the Losers losing, even when they won; but the individual plots themselves varied more than Rock or even the Haunted Tank.

On the other hand, every other Marvel war series, apart from Sergeant Fury, fell short of the mark. As a Navy man, I really wanted to like the Captain Savage title. But when it wasn't swiping from Fury outright, it went 'way too far from reality, even for a war comic. A few years ago, I did a Deck Log column on Captain Savage and I didn't do it any favours.

CB, I much prefer the DC WWII books from the 1950s, when they (mostly) didn't have recurring features. The stories were varied, and because the characters were new, the writers had to give us some actual characterization in every story, something that often got ignored with the repeating features.