Superman Fan posts about a girl's Superman outfit that was advertised in DC comics in the mid-1950s, along with the boy's outfit. As you'd expect, the girl's version featured a skirt.

At this point, we’re still four years out from Kara Zor-El’s debut (in Action Comics #252), and three years away from the “Super-Girl” Jimmy Olsen creates with a magic totem in what would seem to have been a dry run for the character (in Superman #123). Kara’s outfit featured a blue skirt while her precursor had a red one. (In Action Comics #156, temporary Superwoman Lois Lane had it both ways; red on the cover, blue inside the book).

Actually Kara had it both ways, too. In her first appearance, a preview at the end of the Superman story in Action #251, she had on the red skirt: 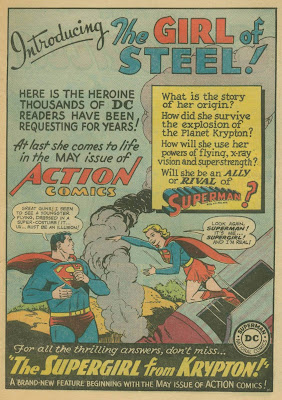 And although it was blue in her full-fledged debut in the next issue, they often goofed for the next year or two, as in this cover from Action #262: 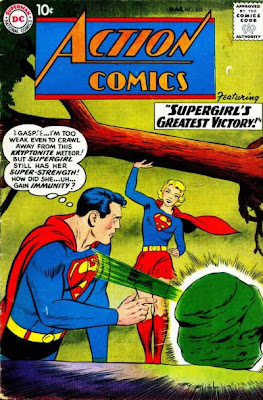 Personally I thought the red skirt was better. And I'm sure if anybody wrote to Mort Weisinger about this "boo-boo", his response was probably that like all women, Supergirl had more than one outfit.

Update: Another example of the red skirt: 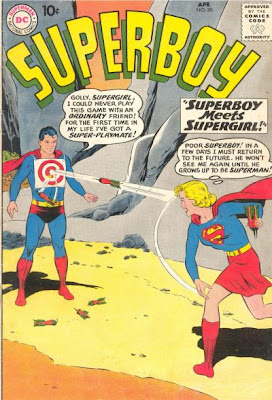 Email ThisBlogThis!Share to TwitterShare to FacebookShare to Pinterest
Labels: Supergirl

" I'm sure if anybody wrote to Mort Weisinger about this 'boo-boo', his response was probably that like all women, Supergirl had more than one outfit."

In the Metropolis Mailbag of Action Comics # 264 (May, 1960), the following letter, from Carol Westlund, of Antioch, Illinois, appeared:

In the story, "Supergirl's Super Pet," you show SUPERGIRL in a red skirt. In other issues she is seen in a blue skirt. Did you goof?

Not intentionally. We merely forgot to explain that SUPERGIRL's skirt is reversible---blue on one side, red on the other. Since SUPERGIRL is really a teen-ager at heart whose existence must be kept a secret, don't blame the lass for dressing according to her whim of the moment.


So you weren't too far off the mark.