My blog buddy Allan at Gorilla Daze has a post up on a cover that is an obvious homage to this famed cover, from Flash #123: 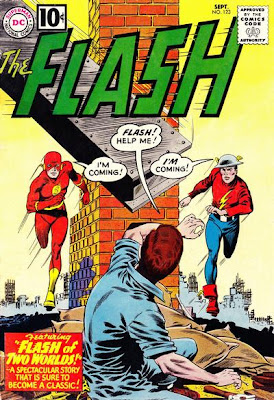 One of his commenters asked if that Superman cover was the first homage to the Flash of Two Worlds cover. I responded that this one was earlier and pretty obvious: 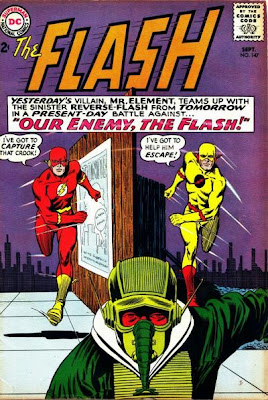 Some obvious similarities there; the central figure, the two people speeding towards him with an object between them so they can't see each other.

The GCD points out that the Flash #123 cover is an homage itself: 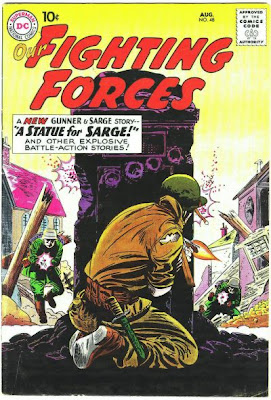 It has the same key elements, but one major thing is different; there's no particular reason for the two German soldiers not to know about each other, whereas in the other two covers, there is obviously quite a surprise awaiting the two men who are on a collision course.

It's interesting to note that the scene shown on the cover of Flash #123 has little to do with the plot. Indeed, it seems shoehorned in the story just to justify that image. Barry and Jay are actually aware of each other in that sequence, even though it doesn't appear that way. In Flash #147, on the other hand, it comes as a big surprise to both the Flash and Professor Zoom to bump into each other.

A couple more swipes that I noticed recently: 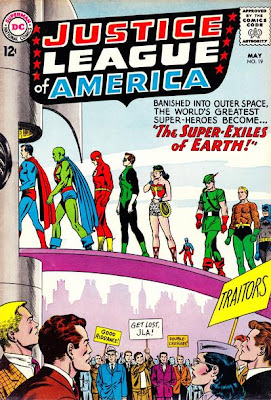 Obviously inspired by this Mystery in Space cover: 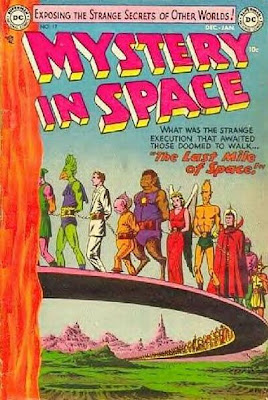 While the next issue of Mystery in Space had this cover: 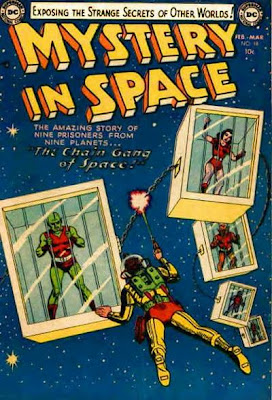 Which clearly begat this one: 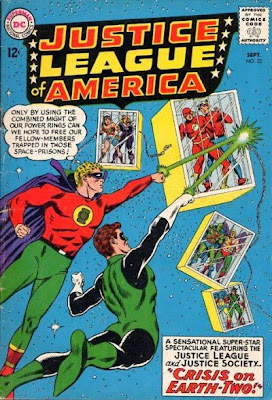 I just love this sort of thing. Reading Back Issue #98 recently I learned that the famous Turtle Boy Jimmy Olsen cover wasn't the first time editor Mort Weisinger had overseen a homage to the 1940 Thrilling Wonder Stories Turtle Man cover - there was also Superboy #30.

Which you probably know!

(And #34 has Superboy encountering 'The Hep Cats of Smallville'!

In Comics Gone Ape, Carmine Infantino said he drew the Flash 123 cover just to see if Julie Schwartz could come up with a story to fit it.

There's a third 'floating bridge' copy. It's to be found on coverbrowserdotcom. The mountains in the background and that patch of rocks closer by are there, like in the MYS 317, but redrawn. The cover is from Gigantic Strange Adventures, April, year not featured, but I'd say anywhere between 1969-1974, Olsen wears a suit with flared trousers...