Of all the Silver Age characters, Herbie Popnecker is undoubtedly one of the most unusual. The 1960s, when Herbie became a surprise hit, were all about cool, with James Bond and Joe Namath setting the style. Herbie was the anti-cool; homely, fat, and none too athletic (apparently). His long-suffering father despaired that Herbie would ever be a useful member of society; as he put it, his son was a "little, fat nothing!"

But what Mr Popnecker didn't know was that Herbie was secretly one of the most famous young men in the world, a confidant of Lyndon Johnson and Nikita Kruschev (and adored by Ladybird Johnson as well). Herbie's secret weapon was his apparently infinite assortment of lollipops, which contained amazing powers. There were time travel lollipops, anti-gravity lollipops, invisibility lollipops, super-hole digging lollipops ...you get the idea.

And Herbie himself could do lots of amazing things. For example, he could fly, he could talk to animals, he could perform an endless variety of magic tricks. He could make himself invisible, or turn himself into a wraith. He could catch bullets with his teeth, or just let them bounce off him like Superman.

One interesting aspect of Herbie was that he lived in the real world. In most comics of the time, characters might face famous real world characters, but usually their names were slightly altered to avoid lawsuits. Herbie met lots of real people who had their real names. In Herbie #1, for example, he encounters Fidel Castro: 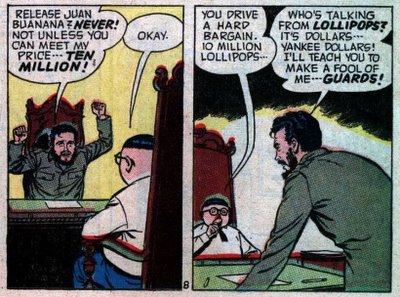 Every woman he met found him irresistable, including some rather famous married gals: 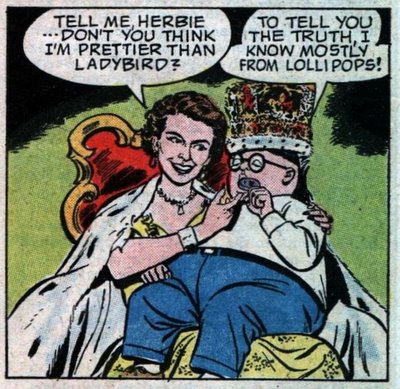 There are some obvious reasons why Herbie was so popular. While every boy hoped they'd grow up into another James Bond, it was nice to see Herbie around to say that there was a wide range of men that women found attractive. You could argue it was the beginning of geek chic. It made no sense that Herbie would be the most famous person on Earth and yet a schlub to his dad, but of course that was part of the charm. We all thought we were superstars that our family didn't recognize yet as such.

Herbie's favorite saying was "You want I should bop you with this here lollipop?" And that was pretty loquacious for Herbie, most of the time he confined himself to terse commands and observations.
Posted by Pat at 9:10 PM