Love Is In the Air

The romance comics represented a pretty good bargain for girls. While DC's superhero titles generally featured about 25 pages of story and art and maybe 5 pages of ads (ignoring covers), their romance mags often carried no advertising other than house ads and so could have 30-32 pages of story and art, depending on whether the mag contained an advice column.

The romance comics often featured relatively mature fare. Part of this may have been that romance comics were read by older readers than the superheros. Like many other comics genres, romances were often grippingly realistic in the early 1950s, then changed to more bland fare in the latter part of that decade with the onset of the comics code.

Interestingly, the storylines changed again by the end of the 1960s, becoming much more soap-opera oriented. While the usual romance formula of girl meets boy, girl loses boy, girl wins back boy did not generally permit continuing characters, DC experimented a bit with long-running sagas. For example, Heart Throbs had a series about "3 Girls--Their Lives, Their Loves" that ran from issue #102-123. Each episode ran about 15 pages, which means that this saga comprised over 300 pages, which would easily be DC's longest story to date, had not Secret Hearts had a similar series called "Reach for Happiness" which stretched out over an incredible 29 issues. And the themes were often surprisingly modern; consider this cover: 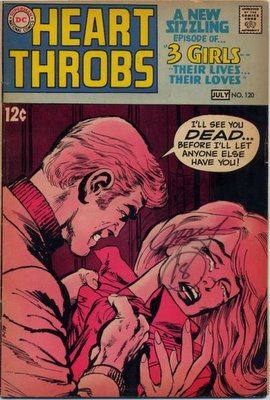