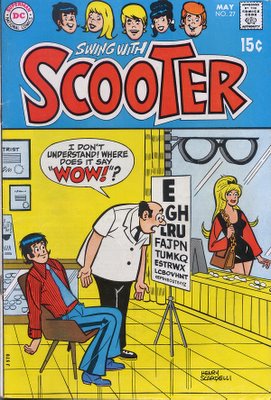 Scooter was DC's attempt to cash in on the teen humor success of Archie, and Beatlemania. He was a British lad with a Vespa (hence Scooter), imported to America. Like Archie he had two gorgeous girlfriends fighting over him, a blonde (Cookie) and a brunette (Penny). He was supposed to have a nemesis named Malibu, but by this issue it looks like they were friends.

BTW, this is an unfortunate title for a story:

GCD says that the stories in Scooter #1 were supposed to appear in a Showcase issue, and it was even advertised as such, but DC decided to go ahead and give Scooter his own title on the basis of the Beatles phenomenon.
Posted by Pat at 2:56 PM