A Salute to Batman Annual #1

In the summer of 1960, DC released Superman Annual #1. The significance of this issue cannot be overstated. I don't believe that DC had ever reprinted an entire story exactly as it had been previously published (with the arguable exception of the Superman story in Action Comics #1, which had appeared in Superman #1 with panels that had been cut from the original story to make it fit).

It must have been successful enough because in the summer of 1961, DC followed up with Batman Annual #1. This is one of the greatest comics ever assembled, a selection of stories brilliantly chosen to introduce the reader to the Batman saga.

First things first, how about explaining the origin of the Batman? But rather than explain the origin in a boring, straightforward fashion, the story How To Be the Batman from Detective #190 was used. In this story, Batman is hit by a ray that causes amnesia, and Robin must explain the origin: 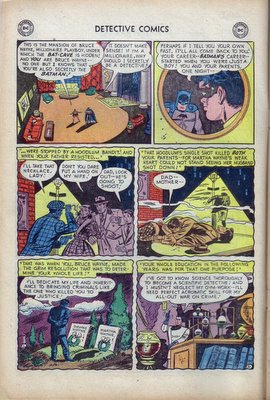 It's a superb retelling of the origin as a flashback sequence. The rest of the story has Robin teaching Batman (and the reader) about his crimefighting techniques.

The second story is The Strange Costumes of Batman reprinted from Detective #165. This excellent Dick Sprang story features Batman wearing suits that are made of asbestos, that contain glider wings, and even one with a scuba outfit. As became cliche in these stories, there is one mystery item that we are told must never be used, and which must therefore be used before the end of the story (you think the Batman writers read Chekov?):

The next story was Untold Tales of the Bat-Signal from Detective 164, which continues the discussion of Batman's arsenal of crime-fighting equipment, followed by The Origin of the Bat-Cave, a time-traveling tale from Detective #205 where Batman and Robin help out a colonial-era frontiersman who spies on the "savages" in order to learn their plans to attack the settlements.

This was followed by Batman's Electronic Crime-File (original title The 10,000 Secrets of Batman), an early example of a simple computer database in action (actually a card sorter). Because he has no super powers, Batman has always been at the forefront of innovation in crime-fighting tools.