Marvel was not the only comics company to notice the success DC was having with its Silver Age heroes. Gold Key Comics decided to try their hand at the superhero biz with an entry called Dr Solar, Man of the Atom, which debuted in October 1962. Dr Solar was a research physicist working on project that attempts to convert energy into matter. Unknown to him, Rasp, another scientist working at the same facility, is secretly an agent for a villain named Nuro. Rasp tries to get on Solar's project, but is rejected in favor of Dr Bently. After trying to kill Solar and failing, he sabotages the nuclear reactor so Bently is exposed to a lethal dose of radiation. Dr Solar finds Bently dying, but apparently survives the radiation himself. However, it is later discovered that he had not survived so much as transformed:

Note the green color; the Hulk had debuted about a half-year earlier. Not sure if changing color is really a side-effect of radiation poisoning or if this is just a little copying.

The action takes place in Atom Valley and there is a love interest; a pretty blonde Gail Sanders whom Dr Solar had known back at college. Oddly, although she does not know what happened to Dr Solar (who now must stay in a lead-lined office), when talking to him through a lead window she makes no remarks about his green skin.

Meanwhile, we discover that Dr Solar has the ability to generate enormous heat, like a miniature sun. However, this rapidly drains him of energy and he must expose himself to the atomic pile to regenerate. Dr Clarkson, head of the laboratory where Dr Solar works, is the only person who knows his secret.

By the second issue, they had mostly dropped the green coloring, although it does appear occasionally. We learn of new powers; Dr Solar is capable of generating "lightning-like rays" with his eyes. He is also capable of changing his body into a wave of energy and flying through the air.

In the fourth issue we learn that he has "radar-like vision". In Dr Solar #5, he gains a superhero costume: 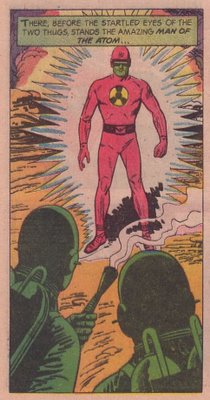 It actually looks a little more red than pink on the covers.

Dr. Solar lasted for 27 issues before finally folding in 1969. He made a brief comeback in the early 1980s for another four issues under the Whitman Comics line.
Posted by Pat at 10:38 AM