It is well-known that Marvel started the Fantastic Four as a way to cash in on the superhero team craze that the Justice League of America was creating over at DC. However, the team that actually seemed more like a knockoff of the JLA were the Avengers. Consider that the the JLA and the Avengers both featured existing characters in their respective universes, while the FF featured three new characters and one revival of a Golden Age superhero (the Human Torch). Both the Avengers and the JLA included a teenaged "honorary" member (Rick Jones and Snapper Carr).

In Avengers #1, Loki wants to get revenge against Thor for getting him banished to a barren isle as ordered by Odin. He decides to utilize the Hulk in this effort. By faking a bomb on a train trestle, Loki deceives the Hulk into destroying the trestle. Fortunately for the train, the Hulk rectifies his mistake in time, but the humans still believe that the Hulk was responsible for the near accident.

Rick Jones, the Hulk's only friend, sends a shortwave message intended for the Fantastic Four, asking for their help, but Loki diverts it so that Dr. Don Blake receives the SOS. Unknown to Loki, though, the Ant-Man and Iron Man have also received the summons, and they independently make their way to the Southwestern United States.

Thor realizes that Loki is behind the illusions and heads to Asgard. Meanwhile, the Ant-Man and Iron Man have located the Hulk, who is disguised as a circus strongman. Thor battles Loki and eventually subdues him, returning to Earth. He interrupts a fight between Iron Man and the Hulk, proviing that Loki was responsible for the near accident involving the train.

As they are about to leave, Ant-Man suggests that they form a regular fighting team, and the others agree: 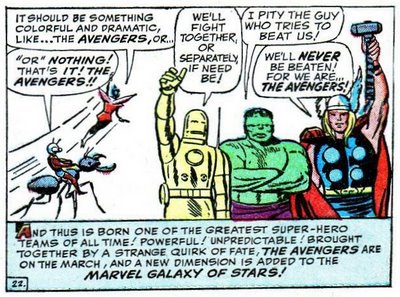 The Avengers would undergo the most dramatic changes over the next few years of any superhero team in the Silver Age. Stay tuned for more!
Posted by Pat at 6:54 AM