The Identity Crisis Superhero of the 1960s

Was the Mighty Thor. While vacationing in Norway, the lame doctor Don Blake discovers an invasion of Earth by the Stone Men of Saturn. They chase him into a cave, where he discovers a cane. When he taps it on the ground it transforms into a powerful hammer while he himself changes into the Norse God of Thunder. Hey, it made for a very quick costume change, which was useful for a comic hero of the 1960s.

Over time, it was explained that Thor actually was the famed Norse god and that he had a family including his father, Odin and his evil brother, Loki. Of course, this made things a bit confusing for readers; wasn't Don Blake the real person and Thor just a superhero identity? Where did Thor go when he tapped the hammer on the ground and changed back into Dr. Blake? Eventually things got so mixed up that Marvel actually asked its fans to help them figure it out, and here, from a letter published in Journey Into Mystery #111 is the explanation that Stan Lee decided to use: 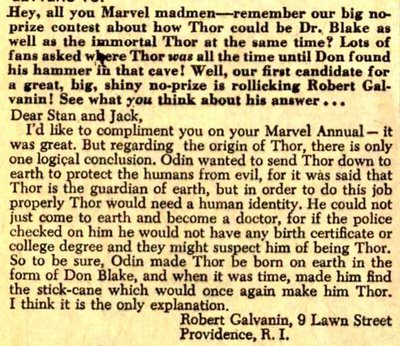