That was the schtick of the Challengers of the Unknown. Ace Morgan, a test pilot, Prof Haley (Hale in #1), a skindiver, Red Ryan, a circus daredevil, and Rocky Davis, an Olympic wrestling champion. After they survive a plane crash unhurt, they decide to band together and take on dangerous assignments because, after all, they shouldn't rightly be alive anyway.

The series marked the (brief) return of Jack Kirby to DC Comics. Kirby had been influential with DC in the early 1940s, creating several long-running series like Boy Commandos (originally a Detective Comics backup strip, who later expanded into their own book which lasted a full 36 issues and the Newsboy Legion, who held down the lead feature in Star Spangled Comics for several years.

The Challengers first appeared in Showcase #6, the Jan-Feb 1957 issue. They made three more appearances in #7, #11 and #12, before graduating to their own title in Apr-May 1958. They were the second feature to make the jump from Showcase to headlining a magazine after Lois Lane, but before the Flash.

One of the more interesting facets of the Challengers was that they started out with book-length tales. This was unique for DC comic books of the time, which always had at least two stories and usually had three. Kirby broke the stories into four parts and had splash panels on each part, very much like what he would do with Fantastic Four a few years later. Oddly enough, though, when the series moved into its own title there were generally two stories in each issue.

June Walker (later June Robbins), a highly regarded young scientist was an honorary Challenger. Of course, like many other DC features the Challengers would eventually attract a bunch of subsidiary characters.

The Challengers initially had rather bland purple uniforms that basically looked like a sweatsuit, although that would change twice before the Silver Age was finished. They went to an ugly yellow and red combination with an hourglass (symbolizing borrowed time) in Challengers of the Unknown #43, then to back to purple suits with yellow striping on the arms and legs in #70, one of the last original issues.

One interesting facet of the early Challengers was the use of "modern" science. In Challengers #1, a Dr Evil-type steals a rare transistor. In #2, we see what a good calculator looked like back in 1958: 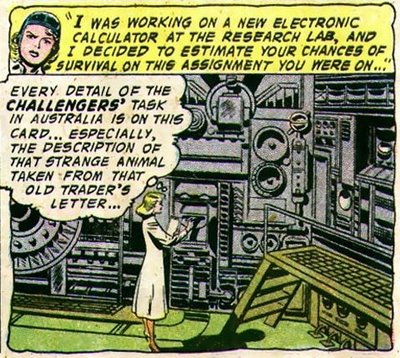 The series was edited by Jack Schiff, and as with all Schiff's titles suffered from a surfeit of monsters, dinosaurs and weird transformations.
Posted by Pat at 9:54 PM