The Lesser-Known Heroes of the Silver Age: Jigsaw

There was a core of about 20 superheroes who had a significant number of adventures in the Silver Age. For DC, it was Superman, Batman and Robin, Wonder Woman, Flash, Green Lantern, Aquaman, Atom, Martian Manhunter, Green Arrow and Hawkman. Marvel had the Fantastic Four, Spiderman, Iron Man, Thor, X-Men, Hulk, The Avengers, Daredevil, the Sub-Mariner, Dr. Strange and Captain America.

But there were plenty of other superheroes who lasted only a few stories and then disappeared. Almost all comics publishers tried their hand at superhero comics at some point in the 1960s. During the height of Batmania, this was especially the case, as superhero comics seemed to fly off the stands while other genres tended to languish.

Harvey was probably feeling the pinch more than other publishers. As I have noted earlier, the baby bust in the late 1950s was reducing the pool of young comic readers by 1966. And the kids who were old enough to read Harvey's titles were all going straight to Batman. So they decided to fight back with a few superhero characters. Jigsaw debuted in his own magazine in Sepember 1966.

Colonel Gary Jason is an astronaut who experiences unexpected trouble while reentering the earth's atmosphere: 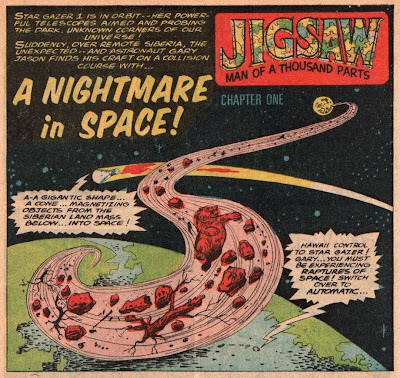 He gets sucked into the cone of debris, where his capsule is destroyed. Fortunately it's a probe from aliens on the moon, who put him back together. More or less: 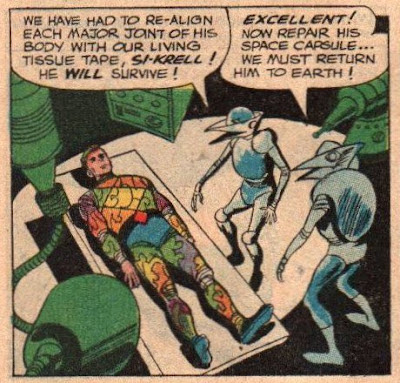 At first he's grateful just to be alive, but it's not long before Ben Grimm syndrome sets in: 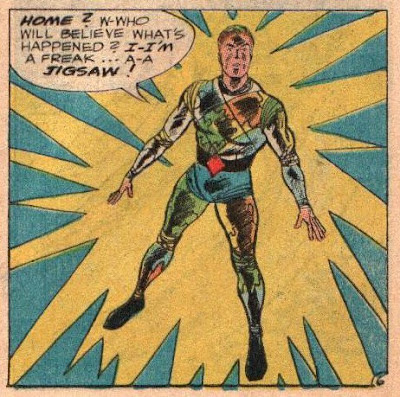 Especially when he discovers he has freakish powers. Despite the interesting design, this turns out to be basic stretchability along the lines of Mr Fantastic. But his girlfriend and the US government react to him as if he was Freaky Freak McAlienFreak. He's so upset that when he visits his science fiction writer buddy, he forgets his own name: 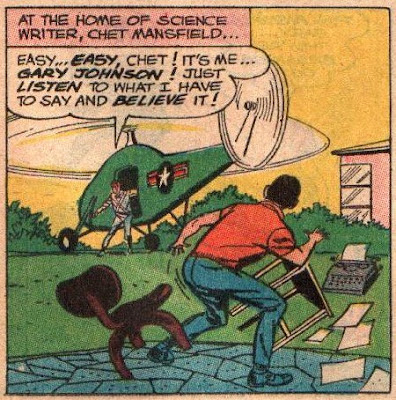 And his alien friends, who look like robotic chickens: 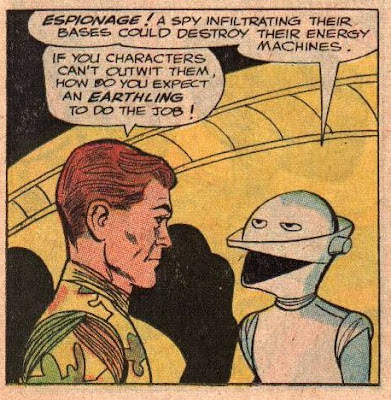 The real villains turn out to be the Pulots, an alien race that looks remarkably like humans, at least in #1: 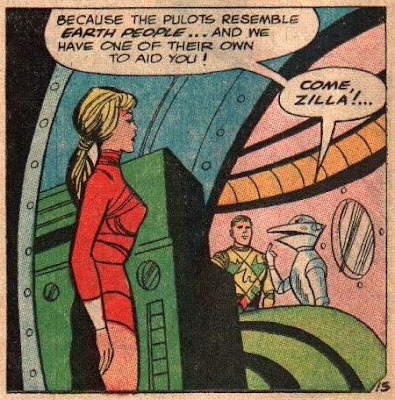 Although by #2 that's gone by the wayside: 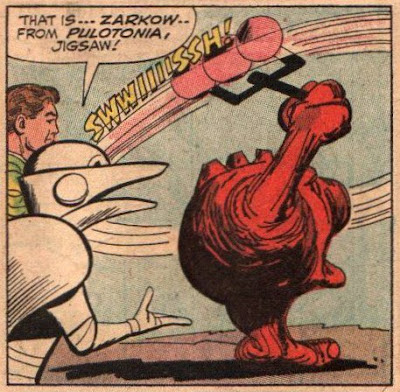 Overall the series (which ended with that second issue) is pretty dull. The artwork is passable but not elevating. Jigsaw has nothing really unique to recommend him; I suppose he serves as a decent introduction to the superhero genre for the young readers that Harvey appealed to at the time.
Posted by Pat at 9:55 PM