This is one of those issues that I had not read until recently. 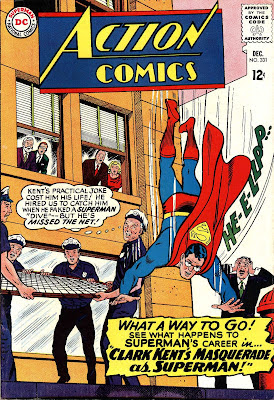 As you can see, this is one of DC's classic puzzle covers. Why would Clark Kent masquerade as Superman? Why would he do a "Superman dive"? Of course, we know that he won't be hurt, but surely this will give away his secret identity.

In the story, Lois has colluded with a pressman at the Daily Planet to print up an edition of the newspaper with the startling news that Clark Kent is actually Superman. It's all a gag on Clark, but of course when she springs the paper on him, he has a couple of adrenaline-fueled seconds: 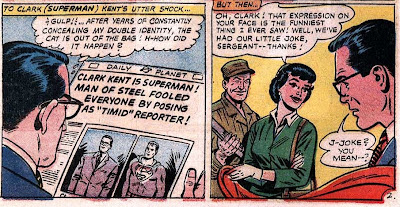 But unfortunately for Lois, the head pressman has taken ill and his replacement runs the "Clark Kent is Superman" story, which causes shock waves around the world. Perry is furious when he finds out it was simply a gag, and is determined to fire Lois and the pressman. But Clark has an idea that may save the Planet's reputation. He could pretend to be Superman for awhile and then the Planet could announce it was a gag all along. Perry shows that he's more of a businessman than an editor: 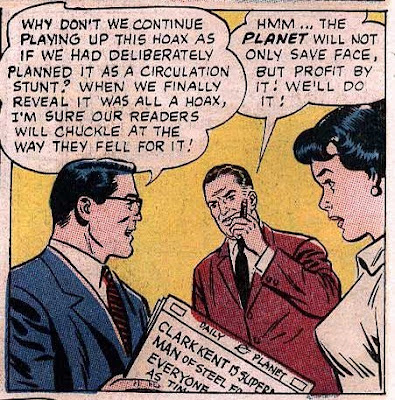 The plot gets even more ridiculous, as Perry pretends to be an assassin out to kill Lois Lane. The bullets from his gun bounce off Clark (he supposedly was wearing a bulletproof vest, so this did not surprise Lois or Perry). But somehow Perry is not apprehended despite the fact that this assassination attempt takes place in the midst of a huge parade to honor Clark for his deeds as Superman.

In a clever plot twist, a crime boss is listening in on the Planet staff as they plan the next stunt to convince the public that Clark is Superman. He impersonates Perry and when Clark appears at a penthouse to demonstrate how he can make diamonds out of coal (secretly the diamonds are hidden inside soft coal), the crime boss suggests that Clark dive over the edge of the roof, to a waiting safety net. This gives us the cover image. Superman takes over and convinces everybody that he had impersonated Clark for awhile. But when Supes leaves and Clark returns, one of the crime boss' henchman shows up and shoots Clark. Lois sobs over his dead body as Perry subdues the gunman. But Clark was wearing the bulletproof vest and so (it appears to Lois and Perry) he survived.

Overall it's an amusing story. The idea of continuing the hoax on the public rather than fessing up is unlikely at best, but it's necessary to the plot, and it is rather amusing seeing Clark trying to pretend to be Superman but at the same time trying not to be Superman.

The Letters Page provides something pretty odd, a letter from Pakistan: 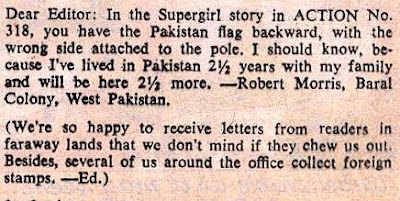 Even odder, the same letter (with some different details) had appeared in Action #330: 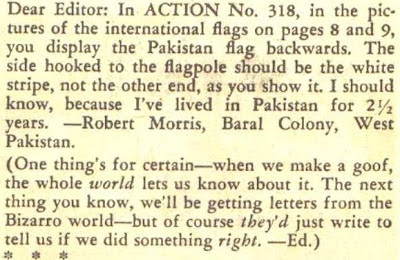 The Supergirl story in this issue is the conclusion to a longer tale that ran from Action #329-331. It's a good enough story and illustrates an interesting enough point that I would like to dedicate a separate post to discussing it, coming up next.
Posted by Pat at 6:23 AM