1. By what term did Marvel refer to DC Comics in the Silver Age?

Answer: Brand Echh, as first pointed out by Kryp44. Cultural reference: TV commercials of the time often compared the sponsor's product to a rival product from "Brand X". In tests, we were advised, consumers largely rejected Brand X.

2. In retaliation, by what term did a DC comics reader suggest that Marvel Comics be referred to as? 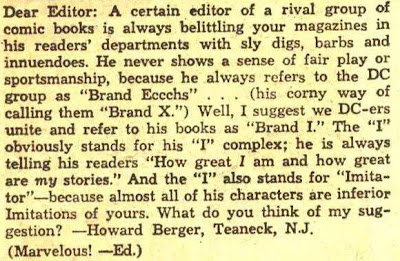 Commenter Michael Rebain remembered that one.

The only other (comic book) superhero to survive all the way from the 1940s to the dawn of the Silver Age was this guy: 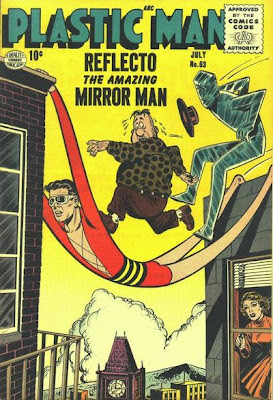 Plastic Man's last Quality issue was published in November 1956. DC acquired the rights to the character when they purchased Blackhawk and a number of other mags from "Busy" Arnold, although they did nothing with Plas until his appearance in a Robby Reed story.

4. Name the superheroes and supervillains who had the same name in the DC and Marvel Universes. Only counted if each appeared in the Silver Age at some point; neither Tarantula, for example would qualify.

There are probably others, but here are a few: The Enchantress (noted by Michael Rebain), Hercules (noted by Steve C.), the Sandman, the Vulture, Electro, and Thor.

5. True Or False: Amazing Spiderman never outsold Batman in the Silver Age for an entire year.

Surprisingly, perhaps, the answer is false. When Batman sales crashed as Batmania died out, the title actually slipped below ASM in sales in 1969.
Posted by Pat at 5:59 AM