One of the Hazards of Abstraction

In the Pulitzer-Prize-winning book from the late 1970s, Godel, Escher, Bach, the writer Douglas R. Hofstadter illustrated a problem of abstraction that we all have encountered in our own thinking and speech. At times we start out arguing a point, get off onto an abstraction, then elaborate on that abstraction, getting off onto another abstraction, and eventually wind up that second digression and pop back up to the earlier abstraction, wind it up and quit, forgetting that we have missed bringing the whole thing back up to the top level.

Hofstadter presented a story about Achilles and the Tortoise (who appeared often in the book). They were out for a day when they were kidnapped by a villain in a helicopter, who took them back to his hideout. While there, they read a book that the villain owned that had an adventure of Achilles and the Tortoise. And in that book, they watch a TV show about an adventure of Achilles and the tortoise. Eventually that TV story winds up and we're popped back to the book, where the story eventually is resolved. The end.

The problem, of course, is that we have not popped back to the top level yet, the story where Achilles and the Tortoise have been kidnapped, so that tale is unresolved.

Enter the Supergirl story from Action #329-331. Supergirl is tricked by an alien villainess named Fantasta, who is attempting to join the "Circle of Evil" by kidnapping her and bringing her back to their planet. Eventually she discovers Fantasta's weakness. Realizing she has failed, Fantasta chooses suicide. Supergirl decides to dress up as Fantasta to discover the secret of the "Circle of Evil"

Having apparently succeeded in her mission to destroy Supergirl, Fantasta (really Kara) is given one last assignment before joining the "Circle of Evil" She must defeat Drang the Destroyer, who has beaten several other candidates for the Circle of Evil.

Complicating matters is the fact that Supergirl has lost her powers apparently in this "cosmos", so she is unable to do anything as her space ship rockets towards the Purple Planet and Drang the Destroyer.

In Action #330, things change a bit. When Supergirl arrives at the Purple Planet, she discovers a bunch of heroes that she has previously encountered (presumably in an untold story). None of the former candidates for the Circle of Evil are there, however. We learn that Drang the Destroyer has another name: Dr Supernatural. Were DC's lawyers concerned that Drang was too close to Kang, and the Destroyer was a character appearing in Thor?

She meets Drang/Dr Supernatural, and he boasts of how easily he will defeat her. But he also shows some weakness. It turns out that he needs regular doses of evil energy, the kind emitted when villains (or heroes) do something evil. Supergirl and the heroes she discovered in the cages attempt to foil him by doing good deeds, but he has anticipated this: 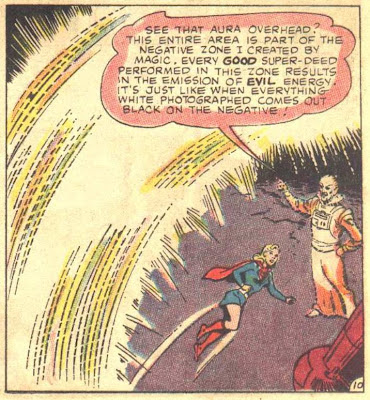 So she decides to do something evil, but it turns out to be a double reverse fakeout: 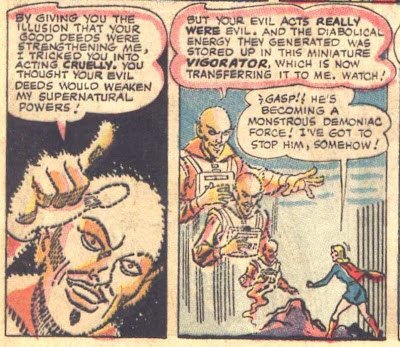 Supergirl tries to trick Dr Supernatural into surrendering by pretending to have magical powers, but he realizes that she's just taking advantage of the abilities of the other superheroes he imprisoned. Faced with the fact that he has defeated them, the other heroes relate the tales of the worst crimes ever committed on their respective planets. Dr S summons the villains responsible for those crimes and assigns them to come up with even more dastardly plots. When those are executed, Dr Supernatural grows and grows in power. But he is unable to control it, and: 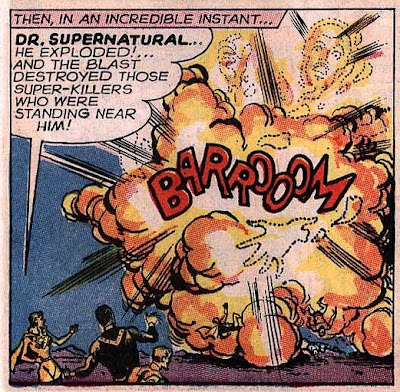 This is a very common theme in the Silver Age; faced with a powerful villain, the hero increases that power until the villain is unable to control it.

The other heroes return to their own worlds and Supergirl to Earth. The End.

Except... what happened to the Circle of Evil? Remember, the whole launching pad for this story was this group of villains who had kidnapped Supergirl. Indeed, initially Supergirl decided to pretend to be Fantasta so she could infiltrate the group: 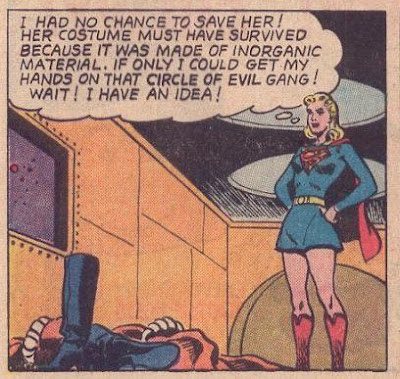 And yet they are mentioned not at all in the windup in Action #331. That doesn't make a whole lot of sense; we know that Dr Supernatural was responsible for her losing her powers on the way to meet the Circle of Evil, so it's not as if she couldn't have mopped them up in a few panels.

The story is entertaining and of course features that wonderful Jim Mooney art. But it doesn't quite get completed.
Posted by Pat at 6:50 AM