Good job, all five questions were answered by commenters:

1. After Green Arrow announced his first resignation from the Justice League due to an unspecified threat, what did his fellow JLA members do after accepting his decision?

Answer: They all decided to dress up as Green Arrow themselves to see if they could draw out whoever was threatening the Emerald Archer, although one of them had a slight "wardrobe malfunction": 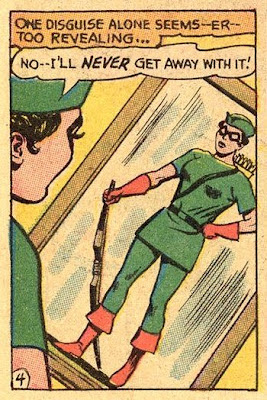 Terrific memory by Michael Rebain, who not only noted the answer, but the exception.

2. How did "Snapper" Carr get his nickname? 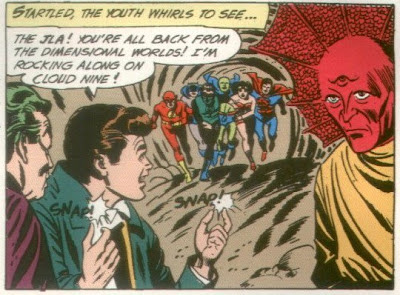 Cultural reference: In the late 1950s the beatniks had a shtick of snapping their fingers rather than applauding.

3. Who was the first new member inducted into the Justice League?

Answer: Green Arrow was the first new member inducted into the JLA. One odd difference between the JSA and the JLA is that in the JSA, members were "retired" when they graduated to their own magazines; hence Superman, Batman, the Flash and Green Lantern were fairly inactive in the JSA for a few years. The JLA was supposed to be for characters who had graduated to their own magazine, although there were exceptions right from the start; Aquaman and Martian Manhunter did not have their own mags at the time.

4. Among the five original members of the JLA (not counting Batman and Superman), who was the first to not appear on a cover?

The Martian Manhunter did not appear on the cover of JLA #7, although he did appear in the story. Good job by Joe Bloke!

5. Who was the first superhero to decline admission to the JLA? 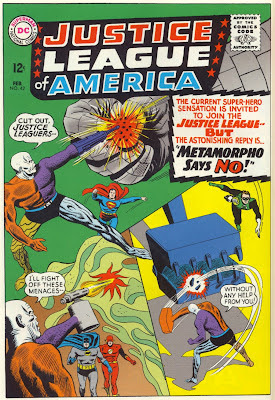 Spanish DC was the first to answer this one correctly (as well as #2 and #3).

I will try to make these trivia questions a regular Friday feature.
Posted by Pat at 8:44 PM